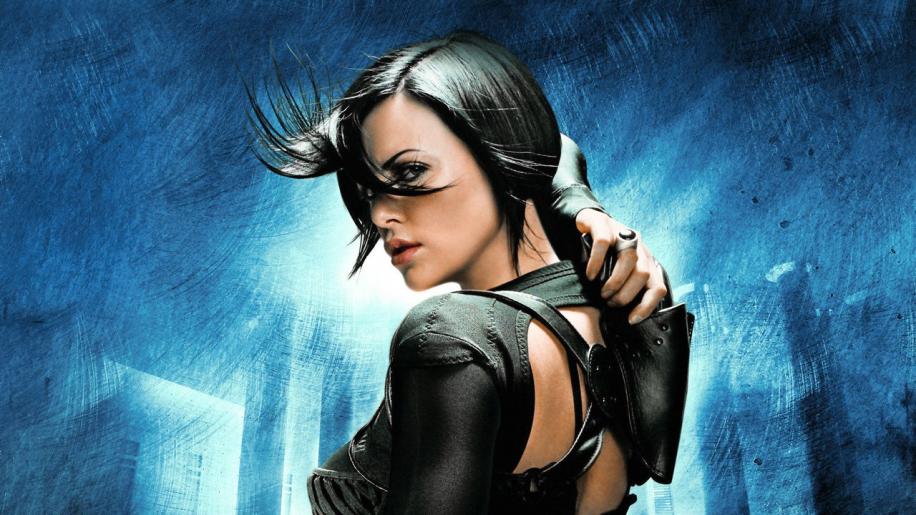 Hi, folks, and welcome to Chris's Quick-Fixes, a series of short, sharp shock reviews specifically designed to cater for earlier releases that have either slipped through the net, or titles that simply do not warrant the usual in-depth and comprehensive dissection that I would normally bestow. Technical rundowns will, however, still be thorough.

Despite having a tremendous love of sci-fi and, more importantly, of the delectable Charlize Theron, I have to confess that Aeon Flux is a truly deplorable exercise in crass visuals, naff Matrix-light action and lousy, self-important direction. In short, I could barely tolerate it. The usual masochistic delight in enduring a bad film involves kicking back and revelling with laughter at its true awfulness. That particular joy is still available for indulgence with Karyn Kusama's tedious and shallow cavalcade of showy pizzazz, but the nagging feeling is that something a lot better could have been salvaged from this gaudy excess. With its plot borrowed from a plethora of other sci-fi shenanigans, mainly of the futuristic utopia type, its characters poured from the melting pot of cliché and its screenplay hoiked directly off-the-peg, Aeon Flux breaks absolutely no new ground at all. The year is 2415 and the human population, whittled down by a deadly industrial virus, now live in walled-in harmony in a beatific sanctuary called Bregna. But the snake in the Garden of Eden is, as usual, a corrupt and dictatorial ruling class, the masters of which harbour a despicable secret.

The typical bunch of highly-skilled, courageous and determined rebels - moronically christened the Monicans - who are out to overthrow this treacherous authority and expose its deep-rooted evil, have the uniquely lithe Aeon Flux (Charlize Theron) as their spearhead. But when her athletically stealthy infiltration of the headquarters belonging to the powerful Trevor Goodchild (Marton Csokas), sparks memories that link her to him in a way that she cannot yet fathom, Aeon spares him and then goes on an odyssey that will see her uncovering the mystery at the heart of hers and the rest of humanity's existence.

Cue lots of pirouetting through a futurescape that looks like Tellytubby Land, whilst the usual gamut of faceless goons are cut down in swathes via bullet, glass shard and PG-13-style martial arts. Along the way, we will encounter a completely ridiculous-looking Pete Postlethwaite, spouting four-hundred-year-old garbage and making watery-philosophical eyes at Aeon, an accomplice with laughable genetically modified hands for feet, a flame-headed oracle-type bint issuing icy orders via telepathic mumbo-jumbo, and one of the world's worst actors, Johnny Lee Miller curling his untalented lips around some inane, power-hungry jargon as Trevor's devious son, Oren. That any of it makes sense is down to the fact that we've seen it all before - the unwitting hero/heroine stumbling onto a hidden truth that, once exposed, will lead to freedom for an oppressed and misled society. Yep, it's that old chestnut, again.

As provocative and cool as the makers want Theron to look in her durable battle-ready, body-stocking, and as sexy as she does indeed look, there is a pure whiff of the ridiculous about it. The face-framing raven-black hair isn't exactly flattering, and all that pouting, but serious, intent on her face is as cringe-worthy as Kate Beckinsale trying to act tough and resilient in those equally vacuous Underworlds. It is a difficult thing to achieve, having a glamorous actress carry off a capable and aggressive character whilst still imbuing her with feminine charms and enough vulnerability to have us concerned for her safety. To date, the only woman who has totally carried this off with success is Carrie-Anne Moss as The Matrix's mother of mayhem, Trinity. And, ironically, she is probably to blame for all the wannabe diva-dross that has followed in the girlie-kick-ass department ever since. But Theron is a fine actress, and there are certainly moments when she manages to project something more resonant than the confines of such a 2D character would normally allow.

Hand-in-hand with a derivative plot, the direction is all style and no substance. Every shot is worked out to within an inch of its life, over-produced and dedicated to freeze-frame decoration. The locations, whilst colourful, are certainly a little different from the usual future-city depictions but seeing Aeon and her cohorts battling across immaculately manicured lawns and up and over clean white walls just reminded me of Arnie's daft rumble-in-the-shrubbery at the end of Commando. The camera loves Theron - and who can blame it - but the extent of the stuntage she indulges in is clearly designed to have us gawp at her curves and the perfect lines of her legs, every pose she strikes a cover-shot, every movement she makes as sensual as it may be deadly. Hang on a minute - if I keep this up I'll be in danger of starting to like this movie ... but for all the wrong reasons. Yet, every time something interesting occurs or another layer of Aeon, herself, is peeled away, the film either tumbles back into videogame showboating or that lame Johnny Lee Miller reappears to drag the whole thing back down into mediocrity.

The original cartoon that the movie is based on is pretty wacky and far out, and praise must be awarded to the writers, Phil Hay and Matt Manfredi, for actually coming up with a largely coherent story - but that is really no excuse for simply pandering to the themes and concepts that sci-fi fans have been gorging on for decades now. Future perfect? It never is with this genre, but even with that accepted plot necessity firmly entrenched within Aeon Flux's narrative, the episodic, quasi-rhapsodic developments and twists of the tale are only stutteringly effective or intriguing. Something approaching intelligence and poignancy can be sensed beneath the MTV gloss and the imaginative visuals, but its power to resonate is over ever sporadic and diluted by too many tricksy-cum-stylish camera-shots. Too much attention has been lavished on imagery at the sacrifice of emotion. I won't deny that fun can be found in the film, for the right mindset, but it is only ever fleeting and immediately disposable. Somehow, even the daft and irresponsible The Fifth Element did the whole garish future-shock thing more justice.

”Expertly trained. Ruthlessly efficient.” So the promo-blurb states of Aeon Flux. It forgets to mention that it is also extremely boring.