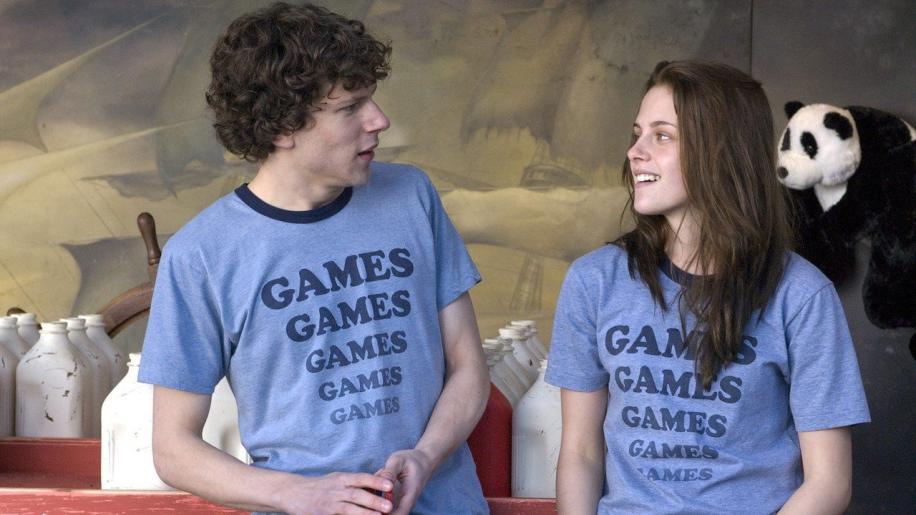 I wanted to see 'Adventureland' because the blurb said it was a 'witty comedy' and with life the way it is, we can all do with a good laugh these days. I have to admit that, at the back of my mind, there was the thought that it would just be another American teen comedy that majored on bodily functions and insulting the infirm to tickle the funny bone. The fact that the blurb also said that it was set in an amusement park where the games were fixed and the rides made you hurl may have been partially responsible for this.
Coming from Greg Mottola, the director of 'Superbad', I was pleasantly surprised (nay, gobsmacked) that it was not typical of the slew of crass, rude, juvenile flicks that have pillaged the cinema and home theatre screens in recent years. 'Adventureland' is more of a gentle smile rather than a raucous belly laugh of a movie. I can only imagine that the person from The Washington Post responsible for the comment 'Truly Hilarious' on the Blu-ray box has been taken out of context.

'Adventureland' concerns itself with teenager James, played by Jesse Eisenberg, who discovers to his shock that the knock on effect of his father being demoted at work, means he won't be able to afford his dream summer vacation in 1987, back packing round Europe. Instead he has to look for a holiday job and so gives the job hunt his best shot, with spectacularly inept results - clutching at straws, desperately trying to match his skills (or lack thereof) to the available jobs.
When all else fails, there's always the summer job at 'Adventureland' but even his own father says he can do better.
On being hired at the amusement park he's shown the fixed games where punters have to attempt to knock the bowler hats off dummies - only there's no fear of this occurring due to the fact that the hats are well and truly glued in place. He's shown the goldfish game where it's physically impossible to drop a ring over a bowl - even from a height of 3 inches. Among the certainties at 'Adventureland' are the facts that there are no freebies and nobody wins a Fat Assed Panda (as they've hardly any left).
He's introduced to the penny pinching owners, Bobby & Paulette, played by Bill Hader and Kristen Wiig. Mr Hader's moustache should be nominated for an Oscar as it does most of the acting in his scenes, but his character is probably the funniest in the movie. He takes over from the near comatose James in a horse derby game and puts an unhealthy amount of energy and enthusiasm into his live commentary, watched admiringly by his doting wife who is convinced of his genius.
Bobby displays a great talent for Customer Care too. When James runs into his office with an irate customer in hot pursuit, Bobby calmly picks up a baseball bat and exits the office snarling “Go on, give me one good reason to use this. Just one!” - and the customer decides he has to be somewhere else.

Despite those two sequences, rather than being a laugh out loud comedy, 'Adventureland' is more a movie about teenage angst and rites of passage as it's at the park that James falls for Em (Kristen Stewart), a young girl whose mother has died of cancer and whose stepmother wears a wig. Unfortunately for James, she's having an affair with pretty boy ride mechanic Mike Connell (Ryan Reynolds) who is reputed to have once jammed with Lou Reed - and so has a near legendary status in the park.
To complicate things even further for poor James, the lovely Lisa P (Margarita Levieva) - the girl with a body to die for- comes back to the park for the summer and strangely shows an interest in him. Now, most shallow young teen guys would simply dive in there, but James is a bit more sensitive than that and has already fallen for the damaged goods that is Em - with all her emotional baggage.
Oh to be young again! Second thoughts - no thanks.

The film captures the dire boredom of a 'dumb summer job' very well as it pulls upon the memories of writer/director Mottola. They say you should always write about things you know and here he uses his own experiences to sedate the audience.
The characters are all pretty thinly drawn, like James' nuisance of a friend Tommy Frigo (Matt Bush) who takes every opportunity to punch him in the family jewels (Isn't that just hilarious?). While we may all have known or seen someone like this, the character exploration goes no further. For all the group scenes, I found I didn't really warm to them and felt I was more an outsider looking in than part of the group and any real care for the characters was missing. In that sense they didn't seem like real people with whom I could relate.

Jesse Eisenberg plays James as a stumbling, bumbling kind of teenager with some degree of charm to the extent that we have a certain amount of sympathy for him and Kristen Stewart fills the shoes of emotionally challenged Em convincingly.

My overall opinion is that as a viewer I was conned by the film's marketing campaign. Take a look at the trailer and you'll see what I mean, as it purports to offer a typical teen comedy. My guess is that they thought if they'd advertised it honestly, they'd have struggled to find an audience. It may not be a great comedy, neither is it a great love story - and it certainly isn't 'Superbad', but take a look at 'Adventureland' as you too might just be pleasantly surprised.