Your very own set of personal trainers. Yipee... 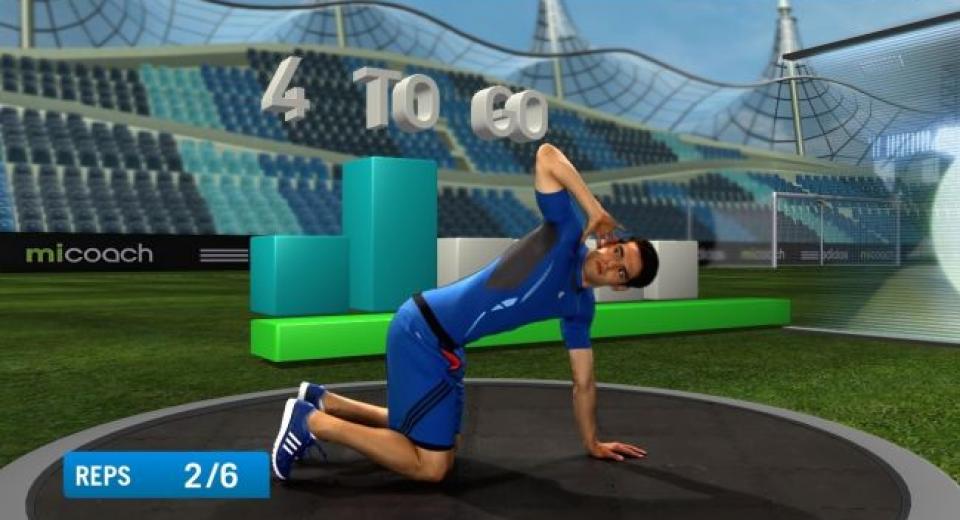 Nobody can deny that Olympic fever has spread across the nation, and rightly so given that our home nation games is proving to be GB’s most fruitful ever. As part of this, it has been seen that the official complementary game has shot to the top of the charts as we gamers seek Olympic glory for ourselves.

However, as with any sports event that hits our TVs, a sudden surge in people trying to get fit and healthier is inevitable. For those who like to workout at home in front of their fancy sets, Adidas miCoach aims to deliver strenuous routines via your favourite games consoles.

Lightning Fish are the ones who have developed this title; they were established to develop games purely for Kinect, PS Move and Wii. Their forte is fitness games across all formats having been behind the Mel B fitness titles and the NewU titles on the Wii.

505 Games picked the game up after its future seemed uncertain (no thanks to THQ’s recent instability) and they have published a string of titles that have been met with varying degrees of success. From the recent hit Sniper Elite V2 to the terrible title that was Brunswick Pro Bowling, the publisher has stuck its fingers into the pies of many genres. Does this necessarily mean that miCoach will be a flop or will it give the fitness freaks a run for their money? Well unfortunately, the game is a victim of its own success in some cases as it actually is a game that has a solid set of routines and skills within it but because of the way the game tracks your movements, many of them are fundamentally flawed. If this were a review of the 360 version then the story might be completely different as the problem lies with the PlayStation Move, and who ever thought those words would be written?

It’s not a problem with the technology per se (although the tracking and calibration can be a bit iffy every now and again) but it’s because you have to hold the wand in your hand whilst you are working out. For the drills that require you to play tennis or football this is fine but it’s when you are asked to perform sit-ups or anything floor based that you get in a bit of a pickle. It wouldn’t surprise me if the occasional wand controller ends up burying itself into the side of someone’s head or in next door’s garden.

miCoach has a basic approach and its menu layouts are all simplistic yet look pretty snazzy given the green and black colour scheme used throughout. Again, the controls let these down as they are not easy to negotiate as previous Move titles have proved to be.

Probably the main appeal to miCoach is the fact that all the routines and workouts are advertised alongside several sports icons including the golden girl Jessica Ennis and football talent Manuel Neuer. As with any celebrity-endorsed product, this has its benefits but it also becomes somewhat of a nuisance after extended periods of time. Granted that the interaction with sports stars is appealing, but their presence does begin to irritate as they are constantly thrown in your face time after time. The game is not short on content that’s for sure given that there are around 400 different exercises for you to try your hands, or feet, at whilst it is also complemented by website and app integration. If you want to check your stats on the go or whilst browsing on the internet then you can which is a great little feature as it can really become a part of your life and routine.

There’s no question that the game will make users sweat as the skills and drills are based loosely on the same types of exercise that the athletes included conduct themselves on a weekly basis. From general preparation exercises to those that are sport related, you will complete many routines that intend to tax those muscles that need toning whilst getting your blood pumping.

Many of these routines feel quite disjointed if you are playing through an extensive workout as they don’t flow from one straight into the other. There’s a loading screen between each one which does not help things flow nicely and makes you falsely take a rest when you’re not scheduled to have one. During each workout, the athlete you are meant to mimic sets off to demonstrate the exercise and you are told to begin when you feel that you have the movement nailed. The timer only starts running down when you begin working out and stops if you have an impromptu mishap or become too tired. The PS Eye shows your movements on the screen but for some strange reason the camera zooms in on the athlete’s face or head, leaving you flapping as you have no image to replicate on screen.

Being a sporty person myself and studying the technicalities of it too, I kind of understand the ins and outs of what exercises do and how they can improve your performance. 90% of the workouts included do actually have some benefit but there were a couple of instances whereby the drills I was told to do had little or no effect whilst they weren’t wholly relatable to the sports either. Whether this was done on purpose to mix things up a little or not I don’t know but some clarification on this wouldn’t go amiss.

It’s a sad affair when you have to criticise a game that is based around something that you enjoy and class as your passion but sadly miCoach just doesn’t give people any real incentive to give up their gym membership or put away their sports equipment in favour of working out in front of the TV instead. If the workouts were thought out a little better and the package had received a little more polish then things might have been different.

Adidas miCoach could and should fit into people's routines of working out given that it has a neat statistics tracker that can be accessed online and through most smartphones but it fails to show that it is worth the effort to do so. The floor routines are ruined by the user having to hold the motion controller and the obscure camera angles for demonstrations leave you flapping mid-exercise with little indication if you're doing it right or not. What's worse is that some of the routines aren't related to the sport you're supposed to be training in or have no effect on your body whatsoever.