It’s a film about relationships, duty and sacrifice that just so happens to look really cool. 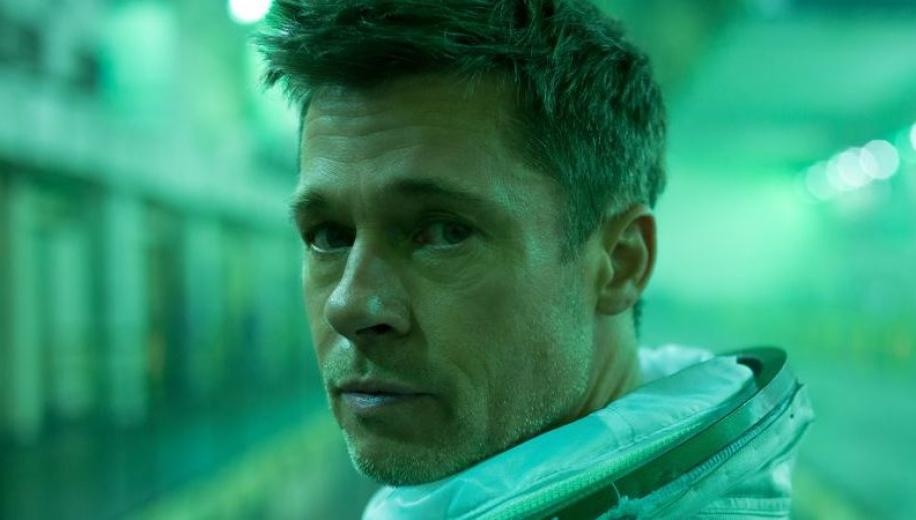 Brad Pitt – and more specifically his face – star in this melancholy and pensive drama, which explores the great question of space and what mysteries exist out there.

James Gray (The Lost City of Z) has been one of Hollywood’s most intriguing and thoughtful filmmakers for a while now, and Ad Astra combines cinema’s current obsession with space travel with a fittingly exploratory and fascinating storyline and some wonderful filmmaking.

It’s the ‘near future’, and Major Roy McBride (Brad Pitt) is tasked with heading out into space to confront his estranged father Clifford (Tommy Lee Jones). Estranged is perhaps the wrong word – Clifford was presumed dead for a decade, having never returned from a mission to Jupiter; now, however, his son is informed that in fact Clifford seems to be alive in space, and causing dangerous surges that threaten life on Earth.

The opening sequence of Ad Astra is something remarkable, though the visuals across the whole film are breath-taking (try to see it in IMAX if you can – Gray and cinematographer Hoyte van Hoytema have created a mesmeric galactical landscape that’s incredibly immersive and truly shines on the ultra-wide screen). We first meet Roy as he’s repairing a damaged rig that begins to quake under one of the aforementioned surges, which demonstrates both the film’s stakes and Roy’s space-warrior credentials.

In facing his relationship with his father, and indeed himself, Roy encounters some weighty subjects on his adventure – perfectly explored with a balance of character and story in a lovely screenplay by Gray and collaborator Ethan Goss. The world of the film isn’t allowed to be weighed down with superfluous explanations or pseudo-science, and is simply presented to us as filmic-fact: in this world (the near-future, remember) space has been commercialised and militarised and is just a way of life. Immediately, the audience is trusted to understand the rules of engagement, and the film moves along much better for it.

But space, and the galaxy and the stars and all the rest – though it forms a very important part of the ostensible story and is clearly present in virtually every scene – isn’t really the heart of the film. It’s a film about relationships and duty and sacrifice that just so happens to look really cool.


A story about all of the minuscule, minute and microscopic elements of the human condition, set in the most colossal setting imaginable, James Gray has crafted a beautiful and philosophical space epic.

Combining intelligence (both conventional and emotional) with a really spectacular aesthetic, Ad Astra is surely one of the most interesting space films of recent years (of which there have been many). Sure, it’s a little reminiscent of recent titles and even those from intergalactic cinema canon, and there are moments where the narration (embodied by a Pitt voiceover) stray a little too much into pretension, but the steadying presence of Pitt, fantastic direction and a sharp screenplay pull everything back into focus remarkably quickly.

Pitt is perfect as Roy, putting on a calm and stoic performance probably best compared to his turn in 2011’s The Tree of Life. Ad Astra makes great use of space’s mind-boggling visuals as backdrops, but it’s clear that Gray’s greatest canvas is Pitt’s face itself, of which every line and crevice is lingered over.

Elsewhere, the rest of the cast is used to varying degrees of success. Ruth Negga is exemplary as the complex Helen, and Donald Sutherland’s appearance lends the film a welcome bit of character. Liv Tyler plays Roy’s ex-wife Eve, whose every appearance comes with an infuriating gust of nothingness. But Pitt is the star, and he executes each decision with a deliberate calmness that’s intriguing in the context of such a big setting.

The ending feels a little disappointing, and the pacing at times seems off – rumours of reshoots and discord perhaps offer insight into this – but the film still never feels anything less than deliberate. IMAX viewings offer fantastic immersion, while the storyline itself offers cinematic escapism that’s simply out of this world.