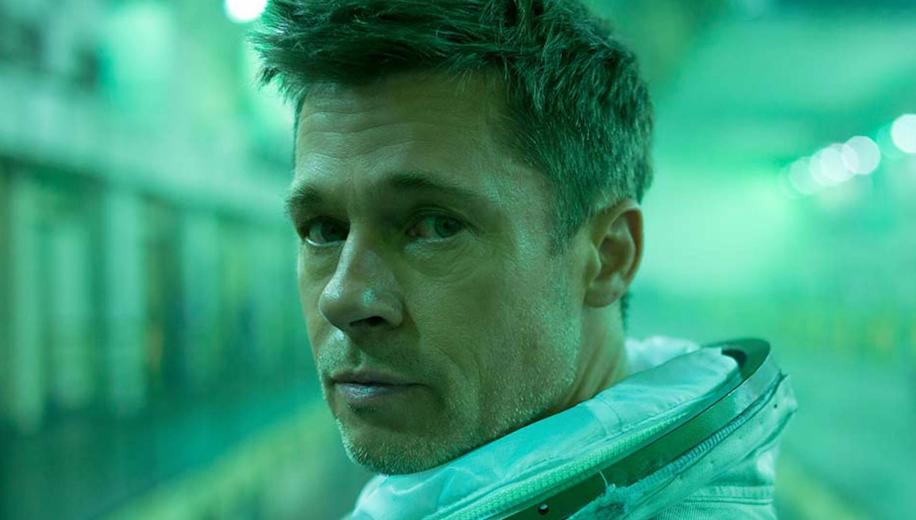 Auteur James Gray does not immediately come to mind as a man to helm an intense sci-fi outing, with little ostensibly in his film history to suggest he would even be interested in this kind of material; initially focussed on crime work (The Yards, and his vastly underrated We Own the Night), before tackling the alluring exploration movie The Lost City of Z, but it's perhaps that last effort which best informs this career trajectory, as the ominous journeys into the jungle in Z are themselves reminiscent of Apocalypse Now - no doubt intentionally - and, beneath the surface, it's that very same Coppola masterpiece which provides the backbone to this outing, trading the dangerous threats of a wartorn jungle for the dangerous threats of deep space with a very similar mysterious top secret trip on the cards to find a much revered lost soul who may have gone off the reservation.

After mysterious power surges echo through the Solar System and threaten life on Earth, Brad Pitt's Major Roy McBride is given a highly classified mission - to journey to Neptune, the last known location of his famous astronaut father (Tommy Lee Jones), whose project is believed to be the source of these powerful surges, and stop them.

Having admitted to taking inspiration from Hearts of Darkness - Conrad's novel from which Apocalypse Now was adapted - it's clear Gray was indeed shooting for the stars with his first sci-fi epic, and he largely hits the mark, providing a gripping outing rippling with spectacularly tense survival action sequences, and undercut with some soulful narration (think Sheen in Apocalypse). The score is fabulously evocative, with Lorne Balfe (Mission: Impossible - Fallout) and Max Richter (whose work has been used in everything from Malick to Villeneuve, both of which can be felt in this film) putting together a Solaris-esque mood piece that isn't afraid of cranking it up, Interstellar-style, in the more tense setpieces. And the cinematography, from Hoyte van Hoyt (who's done Nolan's last three efforts) is exceptional.

2019 was clearly Pitt's year, standing out in Once Upon a Time in Hollywood, and here taking centre-stage for this frequently one-man-show, although his character's narration is considerably more effective than some of the psych sessions, which could have been culled easily, yielding greater effect to what is left (as it is, some of the introspection thinks it is more meaningful than it is). It's nice to see a cadre of familiar faces in support - Tommy Lee Jones weathers his role well, Ruth Negga and Liv Tyler don't really get enough to do but their presence rounds out the package nicely, and Donald Sutherland's guiding hand was particularly effective. The action sequences are absolutely tremendous, Gravity-style, and it's a credit to Gray that he somehow manages to infuse Apocalypse Now in space with such explosive setpieces. Even if the blend of melancholy and space survival action doesn't always fit perfectly, it's an impressively staged sci-fi spectacle that is well worth seeing.


20th Century Fox bring Ad Astra to UK 4K Ultra HD Blu-ray with what is likely the very same unsurprisingly stunning 4K video presentation that adorned their US 4K release from last year, which some might be shocked to find is actually courtesy of a 2K upscale. If ever there was an example of there being no discernible difference between the two, it's this tremendous presentation.

Considering it's lensed by the same cinematographer that did Interstellar, you should know what to expect here - grand, epic space sequences, superbly shot with scale but also prepped for impact when the action kicks off. The 4K presentation laps up ever iota of detail, with clarity excellent throughout and no signs of softness in its quest for a pristine image. There's a wonderfully textured quality too, with light grain barely evident but for in a couple of shots, and it's largely forgettable in amidst the sea of jaw-dropping sequences.

The colour scheme gets a real workout too, and one might be forgiven for thinking there was some kind of added enhancement in the form of something like Dolby Vision, with the depth of the red, purple and blue hues simply stunning, gorgeously adorning the deep space sequences, and rounded out with strong and deep black levels. Peak brightness is also worth noting, both on the moon and in the final act, where there are some pretty intense surges. It's a glorious 4K presentation.

The accompanying High Definition 3D object-based immersive audio track, of the Dolby Atmos variety, is just as impressive, thrumming with a near-constant LFE intensity which isn't afraid of booming during the key action setpieces. Dialogue remains a firm priority, with Pitt's narrated musings getting fine presentation, given an ethereal dynamic to some of the sequences, whilst the score (by the aforementioned Lorne Malfe and Max Richter) largely nailing the juxtaposition of mood piece and intense survival drama, playing tones of Solaris meets Malick for the former, and going full Interstellar / Fallout for the latter, lending some serious tension to the key eyepieces (and even the smaller scale confrontations), and perfectly balanced throughout. Effects are where it's at though, lighting up the surrounds and wielding LFE liberally throughout, making for an even more intense ride.

The extras package is pretty healthy, even if it's only the Audio Commentary which makes it over onto the 4K disc itself, with the remaining features on the accompanying Blu-ray disc only.


The extras package is pretty healthy

Aside from Gray's Commentary, there are a number of nice Featurettes looking behind the production, Pitt's casting, character and stunt work, as well as a short glimpse of Deleted Footage and a Trailer.

An impressively staged sci-fi spectacle that is well worth seeing
Ad Astra comes to UK 4K Ultra HD Blu-ray courtesy of 20th Century Fox, affording what looks to be the exact same disc as the US release they put out last year, delivering excellent 4K video and a thunderous Atmos track, as well as a nice selection of extra features. It comes highly recommended.