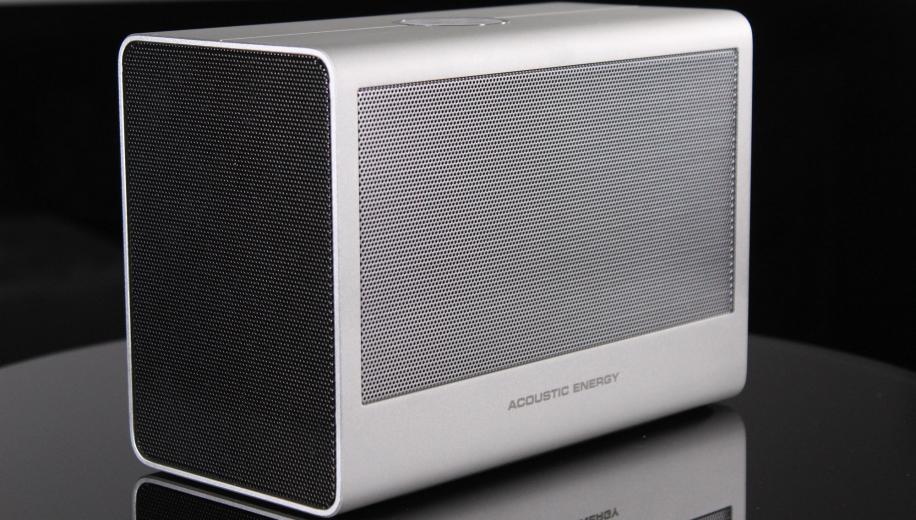 What is the Acoustic Energy Aego BT2?

The Acoustic Energy Aego BT2 is a portable compact wireless speaker that includes support for Bluetooth 4.2 with aptX decoding. The robustly built and minimalist Aego BT2 is intended for use anywhere in the home or even the garden. It has a long battery life, a built-in microphone for hands-free calls, and you can even pair it to a second BT2 to create a stereo system.

From the start of October, the Aego BT2 benefits from a significant price drop, and will be available for just £149. That's potentially great value when you consider the build quality and specifications. Acoustic's Energy's Aego Soundbar really impressed in our review two years ago, so we're expecting a similar level of performance from the Aego BT2 this time around. The Acoustic Energy Aego BT2 delivers a superb level of build quality that far exceeds its price point. The cabinet is composed of a silver aluminium casing with curved edges, combined with steel mesh grilles at the front and sides. The rear and bottom are made of rubber, which makes it easier to pick up and hold, while also providing solid support and isolation when in use.

The overall build quality is excellent, with the BT2 feeling solid, weighty and well-engineered in your hands. The design is fairly minimalist, but the black sides and rear add a nice two-tone effect and the silver styling will look good next to an Apple MacBook. The compact nature of the Aego BT2 means it can be easily placed around the house, complementing contemporary furnishings. The only controls are located on the top and take the form of a circular rubber pad with a silver trim around the outer rim. The controls are described as 'touch sensitive' in Acoustic Energy's marketing, but in reality you actually have to press them. The control pad has buttons for power on/off, volume and Bluetooth pairing.

In the middle of the control pad there are two small status lights: the top one indicates the power or battery status, while the lower one indicates the sources. In terms of the latter, blue rather obviously denotes a device connected via Bluetooth, and green represents a device using the aux input. The BT2 supports NFC (Near Field Communication), and the connection point is located on the rear panel.

Aside from Bluetooth 4.2 and a 3.5mm aux input at the rear, the only other connection is a USB-A port. This is exclusively for recharging other devices like your phone, and it can charge when the BT2 is connected to the mains or running on its internal battery. However if the battery charge falls below 20%, then the speaker will stop charging a connected device. The Acoustic Energy Aego BT2 is somewhat limited terms of features, with the company concentrating on the sound quality instead. To that end, you get a pair of forward-facing 2.5-inch drivers with dual side-firing bass radiators. Considering its size the BT2 has got plenty of welly built-in, with the two speakers being driven by a total of 40W – that's fairly meaty for a portable speaker. The Aego BT2 is very easy to setup, and when you first turn it on there's a cool audio signature that indicates the speaker is ready. In terms of connections, you can either pair the speaker wirelessly with a device using Bluetooth or connect one using the 3.5mm jack. There's a connector for the AC adapter, the USB port for charging other devices, and a tiny button for resetting the speaker.

If you do pair the BT2 using Bluetooth the good news is that it also supports aptX low latency, delivering CD-quality audio from compatible devices. There's also the option to use Stereolink to pair two BT2 speakers together and create a stereo system, resulting in a superior overall performance. Finally there's a built-in microphone, which allows you to make hands-free calls when your smartphone is connected.
The Aego BT2 is very easy to setup but the feature-set is fairly limited

The Acoustic Energy Aego BT2 is all about the sound quality, and in that sense it didn't disappoint. After setting the speaker up, which basically entailed plugging it in and pairing with a source device, we ran it in for a while before getting down to any serious testing.

We did try out the 3.5mm aux input, but the majority of the testing was done using Bluetooth, which reflects how this portable speaker will primarily be used. Speaking of Bluetooth, we tested this wireless connection using both an Apple iPhone X and a Samsung Galaxy S9+, with the latter also supporting aptX.

The surprising aspect of the BT2 is how big it sounds considering its physical size, which is great for a portable Bluetooth speaker. That means it can handle most sensibly-sized rooms, delivering a solid and wide soundstage regardless of where you take it.

The Aego BT2 is also able to go loud, thanks to its fairly powerful amplification. This means you can push the speaker without it distorting or sounding harsh, so if you like to crank things up occasionally the Acoustic Energy won't disappoint. It can also handle being used outdoors, which is ideal for a portable speaker.

The BT2 manages to retain excellent clarity and plenty of detail, which is good to hear. There's also a decent treble, with the higher frequencies nicely registered. However this speaker doesn't fall into the trap of delivering good bass and treble, but missing out on the mid-range. Instead it is very effectively rendered, resulting in a tonally balanced performance.

What all this means in practice, is that the Aego BT2 is an excellent wireless portable speaker. For testing I always like to use O, Children by Nick Cave and the Bad Seeds, which combines deep gravelly vocals, with a piano and a rising female chorus. It's an effective counterpoint that the BT2 reproduced extremely well.

The same was true of Sweet Child O'Mine from Guns 'n' Roses, with the aggressive vocals, surging drums and signature guitar riff all delivered with gusto. The sense of stereo placement and localising was limited, but the sound succeeded in filling my lounge with West Coast rock.

The BT2 handled the combination of female vocals and piano on Kate Bush's sublime This Woman's Work with skill, never sounding shrill and retaining the detail in the higher frequencies. The same true of You're History by Shakespeare's Sister, where Macella Detroit's higher register backing vocals are combined effectively with Siobhan Fahey's deeper lead vocals.

The Aego BT2 is a genuinely capable performer, that can deliver a wonderfully natural sound that keeps vocals clear, while picking out the details in the instruments. This portable Bluetooth speaker proves that you don't have to compromise when it comes to sound quality, delivering an assured and enjoyable level of audio.
The sound is surprisingly big, with great clarity, plenty of detail and a solid mid-range

The Acoustic Energy Aego BT2 boasts a compact minimalist design, a very solid level of construction and an emphasis on sound quality over features. The BT2 is easy to setup, which is important for a portable wireless speaker, and the Bluetooth connection is robust and stable. The sound quality is excellent regardless of whether you use an iOS or Android device, but if you can take advantage of aptX decoding then all the better. The speaker is easy to control, and offers a built-in microphone for taking calls from your mobile, as well as the opportunity to recharge it. You also have the option to pair another BT2 and create a stereo system, although I wasn't in a position to test this feature.

The audio performance of the BT2 is very impressive, with a surprisingly large soundstage considering its physical dimensions and portable nature. The addition of the side-firing passive radiators definitely give the sound more width, and a decent amount of bass as well. The hefty amplification in a speaker of this size, means that there's plenty of power to for the stereo drivers, and the BT2 can go quite loud without distorting or running out of steam. The sound quality retains exceptional clarity and plenty of detail, although the sense of stereo separation is obviously limited by the size of the cabinet. The mid-range is particularly effective, although there is still good treble and bass, which results in a balanced sound.

Overall the Acoustic Energy Aego BT2 is an excellent Bluetooth speaker, that proves you don't need to compromise on sound quality if you want both portability and value, making it highly recommended.