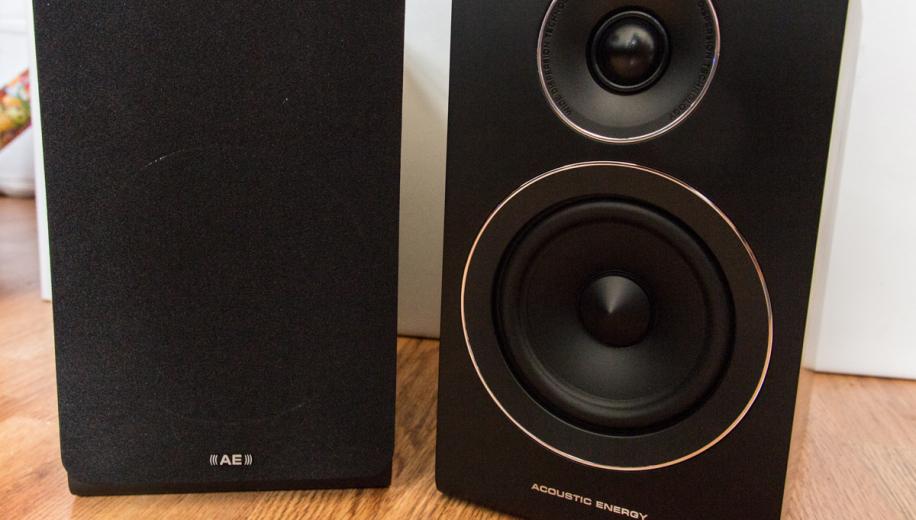 What is the Acoustic Energy AE100?

The Acoustic Energy AE100 is a compact, two way standmount loudspeaker that joins the ranks of affordable models looking to become your choice in both a stereo or multichannel context. Like the AE1 Active that we reviewed recently, the AE100 draws on a little bit of Acoustic Energy’s own history for inspiration. The original AE100 debuted in the 1990s. It and the larger AE109 floorstander (which has also been revived) were pretty much the speakers that put Acoustic Energy on the map as far as affordable speakers went. Selecting this number then, is not a coincidence.

Unlike the AE1 Active though – which while a similar form to its namesake is both a different type of speaker and one that employs entirely different components – the AE100 is also part of an ongoing evolution of small affordable speakers from Acoustic Energy of which more than a few have been very good indeed. The Aegis range that replaced the original AE100 was a fine speaker while as recently as 2015, the AE101 that was reviewed here also put in a strong performance. As such, while Acoustic Energy is perfectly entitled to look back, it also needs to ensure that the speakers move forward.

There’s also no hiding that there is some serious competition to these little speakers. Perennial overachievers Q Acoustics still make the unreasonably good 3020 at a similar price and after some years of being rather quiet, Mission is back and showing people why they used to be so fond of the brand. Is the AE100 good enough to take on the established order and do justice to that notable nametag? Not too long ago, there was a fair degree of uniformity in affordable speaker design. The reasons for this were pretty simple. With a finite budget to spend on designing and building them, the use of exotic materials was pretty much out of the question. In 2017, these rules have changed a little – production techniques have been refined to the point where if you can be sure of the economies of scale, there aren’t many materials you can’t use. What makes the AE100 interesting is that in some regards it is less novel in terms of materials used than its namesake.

This is largely down to the drivers. In recent years, Acoustic Energy has moved away from their traditional use of metal drivers and moved to different materials. The AE100 uses a 4 inch paper cone mated with a 1 inch soft dome tweeter. Superficially at least, this doesn’t sound terribly exciting but it is worth noting that these materials had already been adopted for the preceding AE101 and worked well in that speaker. It is also important to point out that while there has been a rush to make drivers out of all manner of materials, paper has some qualities that make for an excellent choice. One of these is that unless specifically set up to be tonally forward, it generally has a fairly neutral presentation which is something that older Acoustic Energy speakers could lose if not partnered correctly. To ensure that this relatively small driver has sufficient grunt to sound convincing, Acoustic Energy has designed it with a fairly powerful motor system that, coupled with a long throw, allows it to produce a quoted figure of 45Hz – albeit with no quoted roll off. One factor that helps this is the use of what is fast becoming an Acoustic Energy trademark in the form of a slot bass port. This uses a slim and wide opening in place of the more common circular type port with the view to allowing the same movement of air through the port but without the audible noise that can result. The AE100 has moved this port to the rear of the speaker, in a similar manner to the AE1 Active, whereas the AE101 mounted it on the front. This doesn’t seem to have had any specific effect on the positioning of the speaker which appears to be sufficiently forgiving, it could be used on a bookshelf if needed.

There are some other design cues we have seen in other Acoustic Energy products. The tweeter is placed in a waveguide that allows for wider dispersion than would be the case if it were just mounted in the front panel. The crossover supports single wiring only – in fairness Acoustic Energy has always been less than convinced by any benefits of biwiring – via a single set of reasonably sturdy speaker terminals. The cabinet it made from 18mm MDF and like the AE1 Active, has moved to a rounded corner rather than the older ninety degree one in the AE101. With the move away from metal drivers, one of the things that Acoustic Energy has had to apply some care to is ensuring that the AE100 still has some visible traits that look and feel like an Acoustic Energy speaker. Key to this is the retention of the more visibly pointed dustcap in the centre of the main driver. This is a clear visual connection to the older models and it looks quite smart at the same time. Indeed the AE100 as a whole has to be seen as a nice piece of industrial design. It manages to look clean and modern at the same time as being identifiably Acoustic Energy and it compares favourably to the slightly dull appearance of the Mission LX-2.

In build terms, the AE100 is pretty much what you might expect for a £200 speaker. The choices of finish – the black sheen seen here and a walnut effect – have clearly been chosen with a view to working with the shape and design of the speaker. There are also some neat design touches like the magnetic grilles and the use of chrome trim rings to lighten up the black finish, which means that you don’t feel like you are buying an ‘entry level’ product. It doesn’t feel quite as exactingly engineered as the Mission LX-2 but, for a sense of perspective, the level of quality and finish this £200 speaker exhibits is well beyond what you would have been expecting even a few years ago. The Acoustic Energy AE100s were placed on a pair of Soundstyle Z60 speaker stands and placed roughly 2.5m apart with varying degrees of toe in. They were tested on the end of a Naim Supernait2 integrated amplifier connected to an Oppo Sonica DAC and both running via an IsoTek Evo3 Sigmas mains conditioner. Some testing was also carried out with an AVM Evolution CS5.2 streaming system, again connected to the IsoTek. Test material has included lossless and high res FLAC and AIFF along with some Tidal and Spotify. I have spent very little time with the original AE100 but contemporary reviews pointed to certain brand characteristics being present. They were pacey and exciting speakers but if they weren’t partnered with a certain degree of care, they could be a little on the bright and fatiguing side – one of the reasons that Acoustic Energy speakers of this period formed a happy partnership with the Arcam Alpha gear was that the fractional warmth of the Arcams offset the tendency towards brightness of the AEs.

Fast forward to 2017 and the AE100 is a rather different beast. Listening to the somewhat brittle recording of Biffy Clyro’s Only Revolutions shows this to good effect. This is a congested and slightly fragile recording that can become somewhat fatiguing with the wrong equipment. With the AE100, Many of Horror is delivered with force and aggression but without tipping over into harshness or showing up too much of the congestion as the track reaches its peak. There is a good sense of timing and pace to the performance as well, which isn’t affected as you increase the tempo. The truly ballistic Get your fight on by the Prodigy motors along very convincingly indeed.

One area that helps in this regard is the bass. The AE100 uses a smaller driver than either the Q Acoustics 3020 or the Mission LX-2 but this doesn’t seem to have a meaningful effect on its low end extension. The Acoustic Energy rolls off a little earlier than than the Mission but is entirely competitive with its rivals although it is worth noting that if the frequency response really is down to 45Hz, whatever measurement this has been made to, applies to the key rivals as well as there is significant roll off before this point. Roll off or not, there is usually enough low end weight to make large scale music sound convincing and it is well integrated with the rest of the frequency response. Moving further up, where the smaller midbass driver really starts to pay dividends is in the midrange, the integration between the two drivers is extremely impressive. Listening to Fink’s Pretty Little Thing the AE100 really captures the immediacy of the track in a way that stops you analysing what is happening and start enjoying things instead. Compared to the Mission LX-2, it doesn’t have quite the same sense of sparkle at the very top end but the coherence and musicality it offers is extremely compelling.

This is aided by a naturally convincing tonality that doesn’t immediately leap out at you but leaves you realising after a few hours that what you are listening to is fundamentally ‘right.’ There is a smoothness and refinement, coupled with sufficient detail and vibrancy, so that the result is consistently good. With something like Nils Frahm’s Spaces the piano is handled extremely well. This matters because the AE100 – like any speaker of this size – can’t replicate the scale of the piano but allows it to still convince.

Testing the AE100 with the AVM all-in-one system that has a prodigious sense of space to the way is makes music, the Acoustic Energy reveals itself to be a fairly focussed sounding speaker. There is a reasonable amount of soundstage between the speakers but it doesn’t really extend beyond them. Used in my fairly wide speaker position, this isn’t really an issue but I can see people using them in a narrower position, finding that there isn’t the space that some rivals can generate. The counter to this is that the soundstage that the AE100 does produce is usefully deep and detailed. There is a sense that like its predecessor, the AE100 won’t flatter poor equipment. This needn’t be too alarming – equipment has become very good these days even at affordable points – but if you partner them with equipment that also lacks a little stereo width, the result might be somewhat limited. After a period where many speaker companies seemed determined to ensure that new speaker ranges started at £400 and up, we’re in a bit of a purple patch for affordable loudspeakers. These compact models are more than something that will end up as a pair of rear speakers in an AV system and this extra effort really pays dividends. The Acoustic Energy AE100 pitches into this contest with a slightly different take on the requirements for a speaker at this price. This is a design that trades off fractionally at the frequency extremes to deliver on midrange coherence and engagement in a way that competes with anything else at the price point.

Is it better than the Mission LX-2 and Q Acoustics 3020? It’s certainly up there. Those two speakers can deliver a slightly more significant and sizeable presentation but they can’t always rival the sheer sweetness and involvement of the AE100. Depending on the equipment you are partnering it with, the Acoustic Energy might deliver a level of involvement and engagement that has you favouring it over its key rivals. It doesn’t deliver a knockout blow but the AE100 certainly does enough to warrant a hearty recommendation.