One of the finest 4K monitors available, but at a price! 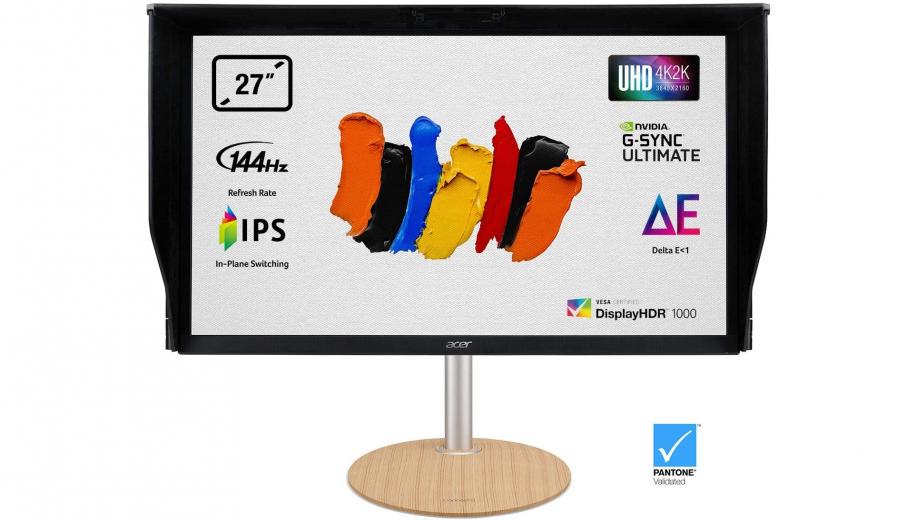 We’ve reviewed several of Acer’s gaming monitors here at AVForums, the most recent being the outstanding but wallet busting £1800 27” Predator X27 4K HDR monitor. With G-Sync, 144Hz refresh rate and peak brightness of 1000nits it really did offer everything you could possibly want in a gaming monitor. Whilst still a lot more expensive than a 1080P or 1440P monitor, a 4K monitor at least now, thanks to GPU advancements, doesn’t require a PC costing several thousand to allow you to play games at decent refresh rate.

The monitor for review here is again from Acer, but this time not from their Predator range, instead from their new ConceptD range which is aimed more for the content creator such as video editors, web design and product rendering than the PC gamer, although still offering everything a gamer would need. The Acer ConceptD CP7271K is a Pantone Validated 27” 4K UHD HDR monitor with Nvidia G-Sync Ultimate, IPS display, 144Hz refresh rate and a peak brightness of 1000 nits. As you can imagine that all comes at a price, which is currently 1p short of £2000! Read on to see how this fares in our tests….

At £2000 you are paying more for the panel and the technology than what it looks like, but Acer haven’t disappointed with the design. It sits perfectly with their content creator theme, with a modern looking wooden base and metallic silver adjustable mount. The monitor itself is all black with no gaming focused features that we have come to expect from the Predator range such as ambient lightning. Compared to some of Acer’s gaming monitors this one has a thick bezel of around 16mm to the top and sides, presumably to cater for the light shielding hood which is included in the box.

The stand covers all ﻿the bases you would need for adjustability, with swivel, tilt and height adjustments. The monitor adjusts to a much lower level than we have seen before with a height of just 438mm at its lowest point and 618mm at its highest point. It is VESA mount compatible and weighs 6.17kg on its own and 8.26kg with the stand.

Plenty of connections as you would expect from a monitor of this value with 1 x USB 3.0 (upstream) port and 4 x USB 3.0 ports (two left side mounted and two rear mounted). Plus, a single HDMI 2.0 port and Display Port 1.4 port. As we found with the X27, this monitor also has a fan. If you have only ever had silent monitors, this does take some getting used to. Its very quiet, sitting around the 30dB, so it’s not annoyingly loud but it is on all the time so may take some getting used to.

The menu control system is unfortunately the same fiddly joystick and four button control system that we have seen with previous Acer monitors. Situated to the rear of the monitor on the right-hand side, it clearly works well from a design point of view being nicely hidden out of the way, but for a high end monitor such as this one we would have hoped for an improved input design. At least the power button has been placed further away from the other three buttons, so you won’t keep accidentally turning the monitor off when trying to access the menu options.

Pressing the joystick control or any of the lower three buttons brings up the quick access menu. By default, the first two buttons are set to display mode and peak white (nits) settings but you can change these to contrast, blue light, volume, overdrive or relative gamma settings. The third button allows you to change between display port and HDMI input.

The main menu which is accessed by clicking the joystick control again after getting to the quick access menu is set out in 6 main sections. The first covers Picture settings, then Color, Audio, Performance, OSD and System.

The Picture menu includes settings for peak white, contrast, blue light, dark boost, backlight settings and more. The Color menu allows you to set the relative gamma, enable or disable the SDR Colors and the YCbCr sRGB for either the HDMI or DisplayPort connections and set the colour temperature between several presets or your own specific user preset. Audio simply has a volume adjustment, Performance is where you will find the overdrive settings, OSD for changing the menu settings and finally System for changing the input, hot key assignment and sleep and start up modes.

One minor annoyance is that you can alter the settings to whatever you want, but you can’t save them to a user mode. You can save them but only by overwriting one of the preset Reading, Darkoom or CAD/CAM settings. If you cycle through the presets and then return to user, it will over write the previous settings you had. With HDR enabled, several of the Picture and Color settings are unavailable such as the Peak White, Contrast, Dark Boost and Relative Gamma to name a few.

For our monitor calibrations we use SpectraCal software and a C3 Colorimeter.

As this is a review sample of this monitor and with no factory reset option, we were unable to ascertain if any of the existing presets would have yielded a better pre-calibration result.

For our testing we use a Leo Bodnar input lag tester. This measures the delay (latency) that it takes a video signal to pass from the point of input until it is displayed on the monitor. With this monitor we had results of 21.0ms in standard mode and 20.2ms in overdrive. Not quite as bad as the 22.3ms result with the X27, but a far cry from the rest of the crop we’ve reviewed which tend to range between 12-16ms.

It’s important to note that input lag is not response time. Response time is often the headline number that monitor manufacturers use in their advertising, such as ‘very low 2ms’ for example. Response time is how quickly a display can change its pixels from black to white or grey to grey.  A high response time will mean you are more likely to see ghosting, which is the blurring that you see behind fast moving objects.

As you would rightly expect when you shell out £2000 on a monitor, especially one that is Pantone certified, VESA Certified DisplayHDR and promises a 99% Adobe Colour Space and 93% DCI-P3, the display quality is simply stunning. We thought our current Acer monitor was ok, but compared to this beast, its as if we have come from watching VHS.

Testing with various sources such as 4K and 4K HDR YouTube, we found the colours to pop out at you with a richness that we’ve only ever come close to seeing with the previous Acer X27 4K monitor we reviewed. Add to that a superb black level and maximum brightness level, even with non HDR sources it still looked amazing but turn on HDR and it takes it to another level. Just remember to pick your jaw off the floor. When you see just what this monitor can do, it makes sense why they can charge £2000 for it.

Whilst this isn’t a gaming focused monitor, it of course offers a lot for the high-end gamer including Nvidia G-Sync Ultimate (formerly G-Sync HDR), which, with HDR enabled, you really need a system that has some grunt. Battlefield 5 with HDR and using a GTX2080 Super with RTX was out of this world. PC gaming has never looked better. That quality does come at a price, with our system not quite reaching 60FPS. Whilst this monitor has a 144Hz refresh rate, it’s going to be a while yet before most people will get close to that in 4K HDR and with RTX.

With the continuing development of Windows 10, our previous issues with the review of the X27 4K monitor were not present here. Windows and a lot of the programs and apps now seem to cater much better for 4K and 4K gaming. We had no problems with games not running, getting the 4K HDR to work, or apps and programs opening with text that was far too big or small, Microsoft have come a long way.  It wasn’t all perfect though, when you enable HDR in Windows, the text is slightly off colour. But thankfully you don’t need to enable HDR in Windows for it to work in games as it will automatically change to HDR when you enable it in game.

Possibly our only negative in all of this, apart from the fan that we mentioned previously, is that the speakers are not the best, to put it politely. But when you are spending £2K on a monitor, you are likely to have better options available to you than listening to the audio from two tiny 4 watt speakers.

The Acer ConceptD CP7271K, available for around £2000 offers everything you could possibly need in a high-end monitor. With 4K HDR, 144Hz, 10-bit IPS panel with Quantum Dot FALD and 4ms response time, coupled with the 93% DCI-P3, 99% Adobe Colour Space, Pantone and VESA Certified DisplayHDR, it really covers all the bases.

The image displayed is simply stunning with colours that pop out at you with a richness that only Acer’s X27 came close to displaying along with superb blacks, clear and concise text and a general top end quality feel to the image you are seeing. It really has to be seen to be believed.

Windows has thankfully moved on so 4K support in programs and apps has significantly improved. For gaming, the HDR looked gorgeous with a quality in Battlefield 5 that we have not yet seen in any PC game.

The ConceptD range is aimed at the content creator rather than gamers, although the hardware is clearly there to supply a superb gaming experience, but if you are looking for a top end gaming monitor, then the X27 is probably your best route. Whereas if you are a video editor or web designer and want the best, then the ConceptD CP7271K from Acer is a monitor that comes highly recommended.