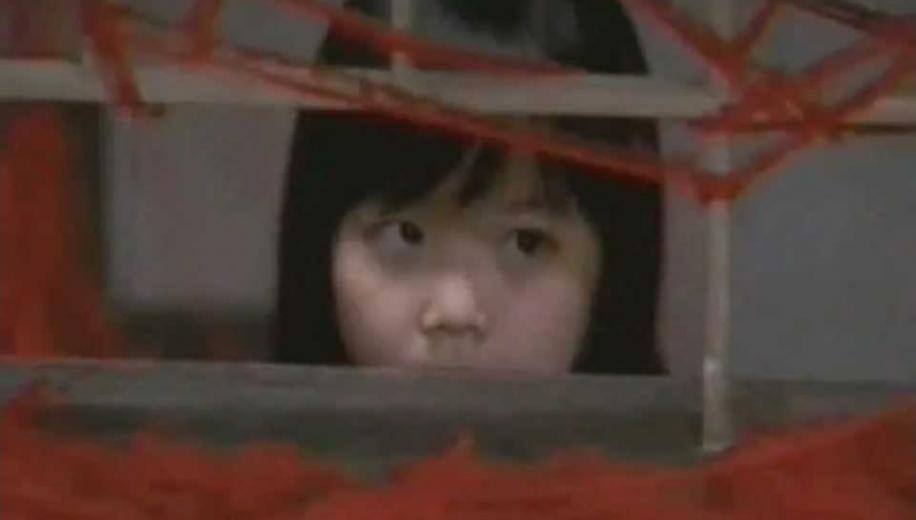 “Why does he hold on to that nasty bug?”

When a young Korean couple, with physical and emotional difficulties conceiving a child, adopt a six year old orphan with a disturbing talent for painting spooky pictures, they are unwittingly taking themselves down a very fateful path that fans of the genre will no doubt see as heavily signposted. All seems quite cosy at first, barring a few sly and disconcerting comments made by an untrusting grandmother about the new arrival and the family find a degree of happiness, albeit one that is tinged with apprehension. The boy, Jin-Sung (played with innocent-eyed vulnerability by Oh-Bin Mun) had been told by well-meaning adults when his mother died that her spirit had become a tree, so does that explain why he is so entranced with the old acacia tree standing in the garden? Why can he be heard talking to it as he sits alone upon its withered and twisted branches? Is the spirit of someone really residing within its knotted old wood actually reaching out and tainting the house with unease and malice? And what will happen when his new mother miraculously falls pregnant? Things are certainly going to turn nasty in Ki-Hyung Park's chiller Acacia and if the set-up feels overly familiar, clichéd even, then the style and atmosphere he creates lifts it out of the norm to terrific effect.

“The ants protect the acacia tree.”

With cold, but assured performances from Jin-Geun Kim as surgeon father Do-Il and particularly Hye-Jin Shim as the mother, Mi-Sook, Acacia maintains an almost icy veneer, depicting a marriage teetering on the brink of collapse, a family desperate to regain the love it once had, but battling against a gulf of resentment that only appears to widen with the course of events. It is actually a quite courageous move to play both these roles as essentially un-likeable, yet still infuse them with sympathy and grace. Mi-Sook tries to bond with Jin-Sung but the impression is given that she has suffered so much already - the inevitable marital tension of not being able to conceive, her desire for a career and the pressure put upon her to agree to adoption by her husband and her father-in-law - that her feelings are now deeply locked away behind a bitter wall. But that wall is brittle, too and Hye-Jin Shim is careful to allow it to crumble before us, bit by bit throughout the earlier half of the film. The film is told from her point-of-view for the most part - the strange happenings that begin to assail the home revolving mainly around her - and she is very effective in joining the long and illustrious line of Horrordom's put upon mothers. (Lee Remick in Richard Donner's tremendous The Omen is still the reigning Queen, though.) Jin-Geun Kim goes through the wringer as well. You sense his despair and his hopefulness yet, once again, his attitude and demeanour have been gradually eroded through the strain of his troubled marriage. When he smiles and plays with Jin-Sung he is the perfect caring father, but when he interacts with his wife the old anger and pain still bubbles just beneath the surface. He will undergo the most radical emotional path in the movie, becoming almost the villain of the piece but, despite a momentary misstep of sexual violence that feels at odds with the overall tone of the film, this is all part of Park's cinematic sleight-of-hand. More on that later.

“He looks like he'll kill me. He's not a normal child.”

Oh-Bin Mun elicits the required compassion from the viewer with a superb performance that captivates throughout. We all associate and sympathise with the lonely child but he still manages to exude a confidence and willpower that paints his character with a little more colour than the standard moppet in peril. By turns vulnerable and terrifying, his jealousy at the arrival of the new baby is perfectly encapsulated with a casual hand over the tot's mouth to quieten its crying. This is all the more shocking without build-up, just dealt out matter-of-factly. The burning shed reveals the aching heart within him though, and it provides a touching scene between himself and Mi-Sook. Also nicely handled are the scenes with his eight-year old neighbour, little Min-Jee, who tells him she is a vampire and proves to be the only real friend he has. Park's direction of the children in his film is intuitive and capable. He puts them through some harrowing sequences that, in lesser hands, could seem contrived and wholly manipulative, and it is testament to his belief in their abilities that he manages to create some moments and images of real fear with the horror staple of children in danger.

When Jin-Sung runs away during a terrific rainstorm the movie takes a very dramatic new turn. The swing-shift in character that transpires often raises pertinent questions about character and plotting - I have to admit that I was scratching my head a few times in trying to work out exactly what was going on. Lots of why's and what's transpire without any clear explanation on immediate offer. A trick has been played and one that will eventually be revealed in all its horrendous glory. Park, who also wrote the movie, offers clues and moody indications but keeps the level of mystery largely intact throughout the second act. We know something has happened and that we are not being given the full story in its usual linear narrative, but it is the devastating denouement that sees Park's tale turn full circle with some desperately haunting imagery and a thematic wallop that left me a little shell-shocked. Again, this is nothing that we haven't seen before but it is the style and conviction that makes it work so well and seem so fresh.

“I should've cut down that tree.”

Park's unsettling movie benefits enormously from the gorgeous widescreen cinematography that he employs. He creates marvellous space and depth from some impeccable framing, often of only one or two subjects in a location as un-spectacular as a back garden. His smooth and unobtrusive camerawork is deceptively simple, yet bewitchingly composed. There is a nicely familiar aerial view of the setting that places the housing estate where the action takes place momentarily in a Spielberg-ian Poltergeist-cum-E.T. light and although he drains colour from the film, except in some key sequences, to maintain the frosty atmosphere, he keeps the house, itself, welcoming and the environment anything other than nightmarish, making the horror when it comes, all the more disturbing. The acacia tree appears for the most part unthreatening, forlorn. Dying, perhaps. Only the arrival of Jin-Sung seems to rejuvenate it and later on, Park bestows us the resplendent sight of the tree in full scarlet bloom, after all believed its last leaf had been shed years before. Nevertheless, the mood that he captures is one of slowly enveloping dread and complete unease. Tension is brought on by all the characters and begins to clog up every scene, becoming a chokehold by the climax. Unlike a lot of western fear-films that rely on specific set-pieces to deliver appropriate injections of terror and darkness before wimping out and sliding back to relative relief in the next scene, Asian cinema seems to hone, and thrive on delivering, entire movies built on mood, their unique atmosphere dripping from virtually from every frame and seeping into the marrow without you even realising that your blood is freezing in your veins. Whilst Acacia falls some way short of Nakata's Ringu or Dark Water in the soul-paralysis department, it still provides a deliciously squirm-filled frisson of pure dread. Even the score is deeply unnerving with lots of Evil Dead-style piano tinklings that are, at once, mysterious and haunting, but beautifully lyrical all the same. Oh, and Park does manage a few genuinely bone-jolting shocks - a room full of bizarre paintings, some pesky ants and a couple of nasty dreams - along the way to punctuate the otherwise slow-burn escalation of tension.

Overall, Acacia is an exquisite depiction of familial tragedy played out within the framework of a horror film. Full of characters that, on the surface, are slightly un-empathetic but still place their hooks deep within you, and drag you into their unpleasant world. It's a small-scale, close-knit tale of relentless build-up and I, for one, think that the journey was well worth taking.