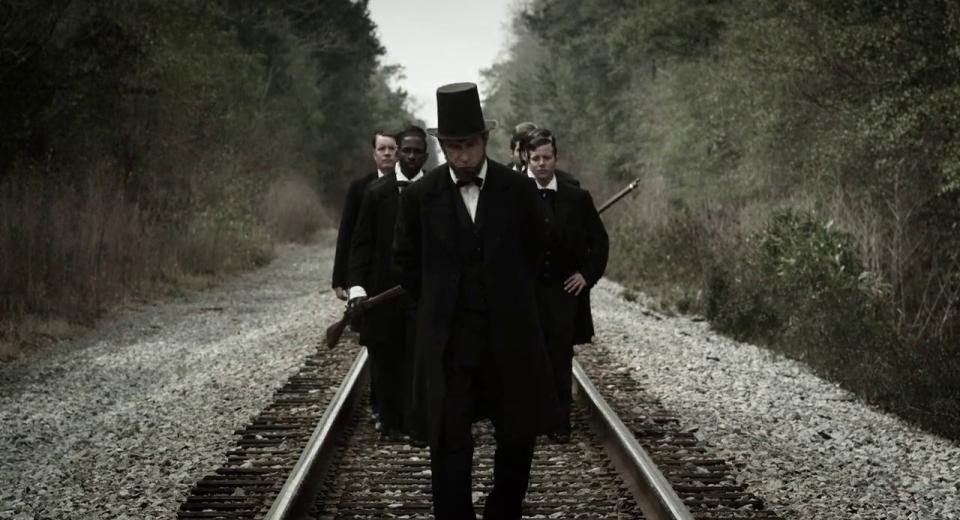 Zombie movies are hardly a new genre with well over 500 produced to date, but the un-dead have seen a resurgence due at least in part to various First Person Shoot-em-ups and EMO culture. These films seem to fall into various categories – gore, sexual content, historical - even Film Noire. Some gain cult status and not always because they are any good while quite whom some of the films are aimed at is sometimes a bit of a mystery. Chuck in some semi-naked cute girls and lots of mindless violence and the market is clear; spotty youths seeking some fantasy lust. Strip out the excessive gore and replace with a ripped boy or 2 and the EMO girls will be in their element. So where does this leave Abraham Lincoln and his un-dead co-stars? Tricky, as there is a distinct lack of well-endowed pallid young ladies or 6 pack toting guys with intense stares. What there is however, are a smattering of zombies and a vaguely realistic cast of American Civil War extras. Do not confuse this film with the soon to be released Abraham Lincoln, Vampire Hunter. No doubt that will be terrible as well, but in a Twilight kind of way.

The premise of the film is very simple. US President Abraham Lincoln has to kill the un-dead, lots of un-dead. That’s pretty much it. Sub plot? Not really, we meet an old friend of President Lincoln’s and that’s about it really. She is a lady of negotiable affection and the hint is that her daughter might well be his. Quite how she can tell is not clear, after all, eat a tin of beans and try to work out which one made you fart…

Set at the end of the American Civil War, we first get a prequel to try to explain why President Lincoln is so well suited for the role of zombie slayer. This is all too quickly followed by a rather rapid launch into the main err… story. For a low budget movie, the cast is quite extensive, accents seemingly authentic and the locations genuine if somewhat sparsely dressed. No doubt the use of a genuine fort and a bunch of military re-enactors as extras has helped here. The issue with the first part of the film therefore, is the pace. It just moves too quickly for the era it is trying to portray. Where there should be long, slow shots with some atmospheric smoke drifting by and some sizable chunks of dialogue delivered in a slow Southern drawl, we hardly get time to draw breath. It feels like the writers are apologising for there being no beheadings during the scene by getting through it as quickly as possible.

The main problem with this film is that zombie movies need an excess of something. It might be too much gore, oversized heaving bosoms, wobbly gothic sets, an inexhaustible supply of the un-dead… you get the idea. This film just does not have too much of anything. The sets are underdressed, the cast are fairly forgettable, the costumes not very exciting or revealing and the zombie death count fairly low. It’s almost like a sanitized zombie movie, the sort of thing that might get shown just after the watershed instead of buried in the late night horror slot.

Another thing this genre needs is some humour. Zombies are funny to look at. They shuffle around with their blackened eyes, mouths wide open and their ripped clothes trailing behind them, not unlike my teenage daughter come to think about it. Delivering lines of prose about cleaning up the Confederate States while sinking your handy folding pocket scythe into their neck should not be delivered without a witty aside or comic fall off an unlikely cliff to offset that bloody beheading.

The bland sets are no doubt as a result of the need to protect the historic shooting location. The budget for the film was incredibly small – purportedly $150K. Once the zombies had been made up and a few fake heads created, there really was precious little money for anything else apparently. This is not an excuse though, as low budget zombie movies can be great fun. Just borrow an abandoned building for a few days, set off a smoke bomb or two and smear the fake blood thickly on all available surfaces. Shooting in a real civil war fort might have added realism, but the trade off in terms of creating a post apocalyptic landscape is just too great.

But back to the plot, so to speak. Head of the Union, President Lincoln gets wind of some “unnatural” goings on and meets an officer who is the sole survivor of a failed attack behind Confederate lines. He recognises the symptoms of Zombie “infection” and dispatches him in a short fight. Gathering around him a select group of agents, he heads off to sort out the problem. Funnily enough, the remaining Confederate troops still in the fort are somewhat paranoid and start attacking the Union insurgents and so Abe is getting it from all sides. Being the great leader of men that he is, he soon has most of the remaining forces united against the un-dead and he starts to formulate a plan. While trying to get to the telegraph office he stumbles upon some more survivors, including his old flame. Safely back in the fort, they re-group and plan their Zombie eradication program. This is of course the cue for the main killing spree, in all its bloody, beheading glory. The head count rises to a reasonably satisfying level, but once dead, the zombies seem to melt away, so you are denied the satisfaction of seeing the total boy count.

So what’s good about the film? Well, if you like civil war re-enactments with genuine accents and uniforms, you might well revel in this aspect. There is something satisfying about the zombie killings, with plenty of variety and over 50 executions to witness. The film was well shot, with decent camera work, even if the depth of field is a little deep at times. The visual effects are fairly limited, but are a little obvious and once you have selected the 5.1 DTS-HD Master audio option instead of the default PCM 2 channel, the sound is fairly satisfying.

I reviewed this movie because I wanted it to be a really terrible film. So bad it was actually entertaining to watch. Unfortunately it is just too bland and vanilla to be really awful, so just ends up being bad. There are over 300 zombie movies that have been released on DVD and VHS over the past 30 years or so. This presentation is not going to win awards or gather a cult following. I really wouldn’t bother with this one.