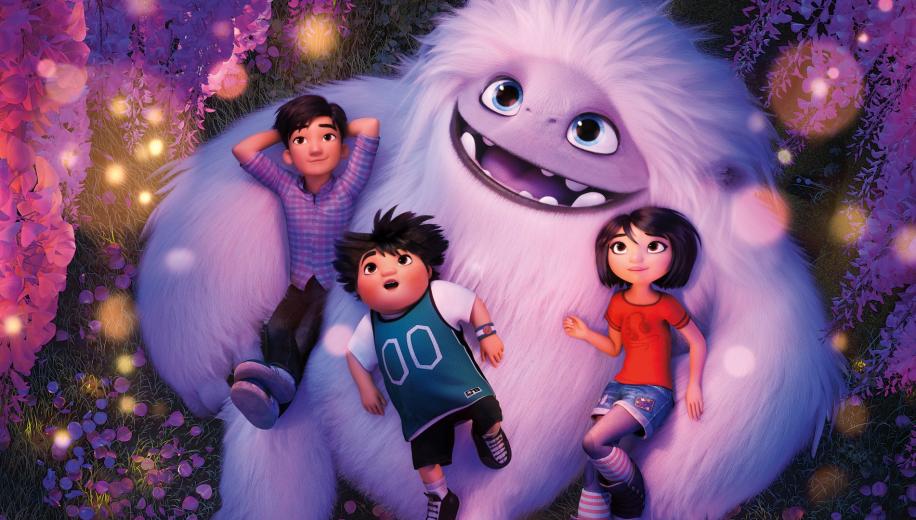 The second full collaboration between Dreamworks and the Chinese Pearl Studios after Kung Fu Panda 3 boasts some gorgeous scenes of magical wonder but struggles to bring it all home.

There's certainly a lot of heart in this tale, which pleasantly plays with ethnic diversity as its teen protagonist, Yi (Agents of Shield's Quake herself, Chloe Bennett), fiercely strives to become independent of her widowed mother and grandmother, working every job she can manage in Shanghai and barely having a moment to breathe. After she encounters a Yeti hiding on her apartment rooftop, her whole life unsurprisingly changes, naming him Everest and taking it upon herself to return him to his family at the top of said mountain, even with the private army of a wealthy industrialist (Eddie Izzard) on her tail, desperate to capture the mystical - and perhaps even magical - creature.

Abominable feels like it would have made for a great Disney Short, with an intriguing premise that's rich for being projected into a full length feature, but here is given not quite enough flesh on its bones, instead largely stringing together (admittedly colourful) setpiece after setpiece with less attention paid to the underlying themes of loss which should arguably define the piece. That's not to say that it doesn't work - the more spectacular moments are imbued with such magical wonder that they more than keep you involved; the humour works well; and the protagonist is refreshingly down-to-earth. Everest (which was originally the title for the movie, but likely surpassed by the other recent effort of that name) is a great character, and the scenes where he plays alongside the young boy emphasise his immaturity to witty effect, but, as is often the case with Dreamworks features, Disney still have that magical recipe other animation studios struggle to compete with. Try as it might, Abominable can't distinguish itself from this underdog crowd.

Abominable hits UK 4K Ultra HD Blu-ray in the wake of its likely identical pre-Christmas US bow, delivering a strong presentation from Universal, who top off their unsurprisingly upscaled 4K image with not only HDR but HDR10+.

For those with Dolby Vision, it'll be immediately disappointing to see that this is limited to HDR10+

Certainly, for those with Dolby Vision, it'll be immediately disappointing to see that this is limited to HDR10+ in terms of that added HDR flourish, but thankfully Abominable looks pretty striking nonetheless, even if the lack of DV lessens the perceivable gap between this and its 1080p counterpart.

Sure, there is a modest uptick in detail afforded to the 4K rendition, often barely visible, but still rendering finer texture on fur and backgrounds, in spite of the 2K DI limitations. And yes, the HDR (and WCG) enhancements do refine the colour palette, bringing more vibrant tones, depth of blacks and sheer white peaks, affording that edge over the Blu-ray which has kept this new format alive. But it isn't quite demo 4K territory, perhaps due to the fact that the 1080p counterpart is just already so damn good (play any of the magic moments, and you'll struggle to not be wowed by the standard Blu-ray). That still leaves it a very good video presentation, thankfully, even if - considering the Blu-ray has the Atmos track too - the gap has clearly narrowed between 4K and Blu-ray at least in terms of this particular release.

Universal also deliver up a tremendous Dolby Atmos track to accompany the piece, although it should be noted that even the standard Blu-ray also sports this excellent 3D High Definition Object-based Immersive Audio track.

Dialogue is delivered with keen prioritisation across the frontal array, remaining clear and coherent throughout, but it's the effects which stand out, most notably - and much like the visuals - when the 'magic' happens, seeing LFE enhance the low rumbling 'singing' as well as the violin playing, affording the piece a wonderful tinging undercurrent which resonates and permeates your environment. There's plenty of action, sure, which also gets dynamic space across the array, but it's the 'magic' which defines the track, a USP which gives it an edge. In terms of score, it's all pretty generic until Coldplay comes along, refining some core sequences and giving them the heart which the feature itself is sometimes slightly lacking.

The extras are pretty impressive too, with Universal delivering a headlining Audio Commentary track as well as a number of further features, the best of which is clearly the Short Film, Marooned.

The extras are pretty impressive too

A further short, Show & Tell, affords more Yeti fun, as does the selection of Deleted Scenes (and a small segment with grandma), with over half a dozen substantial featurettes delving into everything from the animation, to the Chinese characters, to the voice actors.

Abominable, despite its flaws, is a strong animated offering, with an unusual setting and protagonist and some spectacular scenes of magical wonderment.

A solid package for fans to pick up