A Time to Kill Movie Review 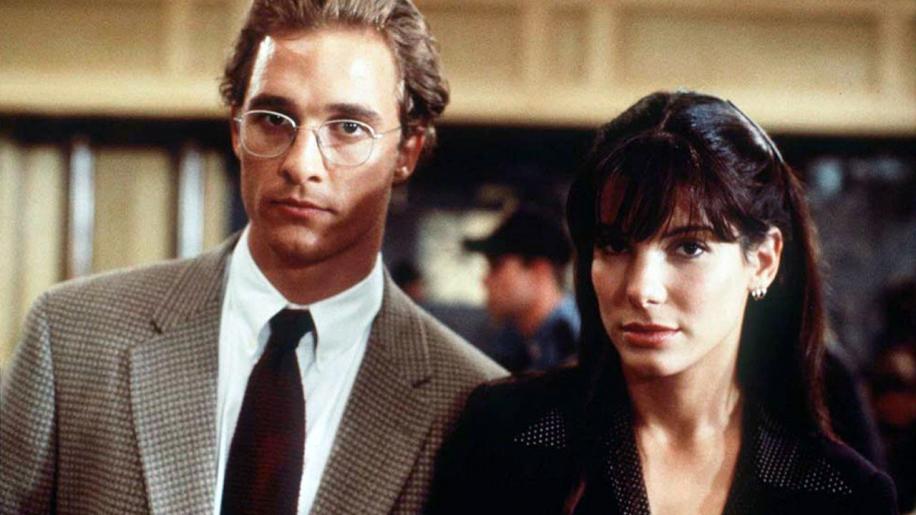 Whilst in hiding between making Batman Forever and Batman and Robin for fear of being lynched by both fans of Tim Burton and Bob Kane's iconic creation, Joel Schumacher found time in 1996 to direct another John Grisham novel. In 1994 he had the opportunity to take Grisham's The Client to the big screen and then in 1996 he returned with A Time to Kill

I cannot say that I have ever been overly enamoured by any Grisham novel to screen production, and remember well the time I attended the local cinema showing of The Pelican Brief only to fall asleep there in the auditorium. Thankfully I never snored on that occasion and I am eternally grateful to the passer by who woke me after the film had finished. Much the same can be said of The Firm and The Chamber and although I love a good courtroom drama all of Grisham's books and screen adaptations are not fully centred around them. The end result, for me at any rate, is one of complete and utter boredom.

It was then with some surprise that I found myself watching A Time to Kill all those years ago, and even though I knew I was being suckered into a film with some glaring errors I couldn't help but actually enjoy it.

Carl Lee (Samuel L. Jackson) is an African American working in a lumber yard in South Mississippi. The community he lives in is divided on racial lines, each colour in the main keeping themselves to themselves. One day though a couple of red necks high on weed and drunk on beer kidnap, rape and leave for dead his 10 year old daughter.

As these two delinquents are about to stand trail Carl takes the law into his own hands and takes his revenge, killing them before they enter the courtroom. It rests with Carl's attorney, Jake Brigance (Matthew McConaughey), to try to convince a prejudiced jury that Carl was in fact not of sane mind when he committed these actions. Succeed and Carl goes free, fail and Carl faces the death penalty.

The film has a number of top ranking actors, the leading parts though suited to the vacuous talents of both McConaughey and his assistant Ellen Roark (Sandra Bullock). I have never found either of these two actors worthy of any merit and the fact that they play the leading roles here is another reason why I just shouldn't enjoy this film. In my defense their parts are hardly demanding, although I must admit it is the speech that McConaughey gives at the end that really does it for me as far as this film is concerned. The other actors starring here in some small way though I do actually enjoy, Donald Sutherland playing the part of McConaughey's drunken mentor is always good to watch; at one point though giving a similar speech to McConaughey as his Mr X. character did to Costner in J.F.K. That in itself I found rather amusing. Samuel Jackson has little to say throughout the film being incarcerated most of the time but he does have a couple of good speeches and I have to say that his final one to his attorney, the night before summing up, is another reason I enjoy this film. He's correct in what he says; the state and country he lives in does not see him as a man they see him as Black, Negro or African American and all of those terms say just one thing... different.

Other sundry characters include Donald's son, Kiefer way before his escapades as Jack Bauer in 24 and really coming off the back of a few sub standard features and television shows. I think it's fair to say that Kiefer was still finding his acting feet at this juncture in his career but I do think that this was a good enough stepping stone to greater things. His character shows greater depth and he plays black hating Ku Klux Klan member chillingly well. Kevin Spacey pops his head up as the clean shaven District Attorney hell bent on securing a conviction. From my earlier reviews you may have spotted that I have time for Spacey, he's an actor of some credibility and depth who can pick and choose the roles he plays. Admittedly here he's treading water somewhat probably only taking the role to pay some bills. Even at this though his presence in this film does add some respectability to the film as a whole.

So what is it about A Time to Kill that captured me from the outset. Bar a couple of lump inducing throat moments I put it down to one thing and one thing only, the birth of my child a few years prior. I have always thought of myself as a liberal, often giving anyone the benefit of the doubt but this film makes you ask a very important question. That is... if an act of undeniable cruelty is perpetrated upon your nearest and dearest how would you indeed react? In all honesty I found myself questioning my earlier preconceived ideas and eventually came down on the side of Carl Lee and the actions he undertook. That in itself made me feel a little uncomfortable but for me indicated that the film as a whole had got the point across.

Of course there are parallels to be made between A Time to Kill and the magnificent To Kill a Mockingbird and in all seriousness the latter of those two is a far better film with a much stronger message. That message of racial apartheid can also be seen to much better effect in other works such as Mississippi Burning, American History X and Cry Freedom to name but a few. They have much more to say than this marzipan covered offering. That being said though this still has a feel good factor associated with it which I still enjoy, for all of the brutality in the film it still ends up on a high note and sometimes that's just what the viewer needs

Yes this is my pleasure and I stand before you guilty as charged but like Carl Lee I offer up a defense of diminished responsibility and hope to be acquitted. Still I'm glad to now have the opportunity to include this in my Blu-ray collection if only so I no longer have to get up half way through the film and flip the disc. So a final score of 7 and I'll don the flak jacket.