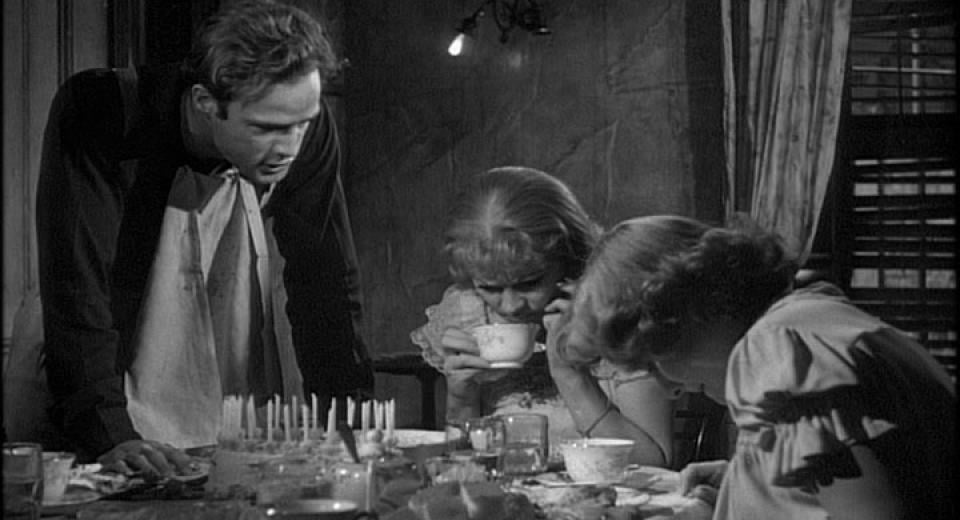 The first thing that sticks out from the sixty year old black and white film is how much detail is present within the image, be it skin texture, clothing weaves, the dirt and grime of the flat, the intricate knick knacks that adorn the mantel piece, the beads of sweat on foreheads, the individual feathers of dress wear, there are clear and definite edges, both fore and background that rarely if ever softens.

Brightness and contrast are set to give terrific greyscale with some definite blacks in the deeper shadows of the apartment – this gives some real punch to the picture at times even if the elusive 3D pop is absent there is still a strong sense of presence.

Digitally there are no compression problems, no edge enhancement or aliasing to content with. There is the occasional print blemish, but the print retains its grain structure giving a wonderful feel to the image. On the whole this is a very pleasing picture. I opted for the English dts-HD Master Audio 1.0 sound track. The original sound design, including the score, was intended to mirror the claustrophobia of the visuals, thus it is wise that there has been no 5.1 surround mix included, just the original track, cleaned up, as it was intended. And the clean-up has been very good with little to no audible back ground hiss and no audible pops of clicks of any kind. Even in mono there is a great definition to the layering between the sound, i.e. the over speaking of the dialogue, sound effects and score – each has its place. During some of the more heated arguments each piece of dialogue is clearly audible. Indeed, dialogue, the most important part of this track is always clear and precise, even if it is, at times, a little bass light. Effects are, obviously, very limited, but trains, trams, thunder and rain are present and sit very well within the sound field, with bass being very limited. There is nothing unnatural at all and it is a credit to the sound design that one channel can remain so very atmospheric. Great stuff. A Streetcar Named Desire is a powerful and compelling piece of cinema as testified by its numerous awards, place on the AFI top 100, critical and commercial success. It was developed for the screen by the original writer and starred the same actors and director that had made it such a huge success on Broadway; its success was pretty much guaranteed. It tells the story of Blanche DuBois a ‘Southern belle’ who has fallen on desperate times and moves in with her sister, Stella and her husband, Stanley. Stanley dominates Stella in every way, physically, mentally and emotionally, but they have a primal relationship which is only upset by the arrival of Blanche, whose loose grip on reality soon starts to unravel under the pressure of Stanley’s relentless authority. With themes of repressed sexuality, homosexuality, alcoholism, nymphomania, domestic abuse and rape the film is as relevant today as it was sixty years ago. Whilst its deliberate pacing and talkative nature may be take some getting used to by those familiar to the more ‘fast cut and pace’ cinema of modern times, such films could learn an awful lot about character, dialogue delivery and simple raw energy when it comes to story. Told by a young, hungry and energetic team of actors and makers who were at the very top of their game, including a mesmerising performance by Marlon Brando in a career making part, the film is simply a must see for admirers of the cinematic art.

As a Blu-ray set this Region free Steelbox edition from Warner contains the restored (director's intended) version of the film that has a picture that belies its age, being detailed with strong contrast; a sound track that is clean, detailed and clearly audible and a whole host of extra material that delves deep into the making of the film by those associated with it. Highly recommended.