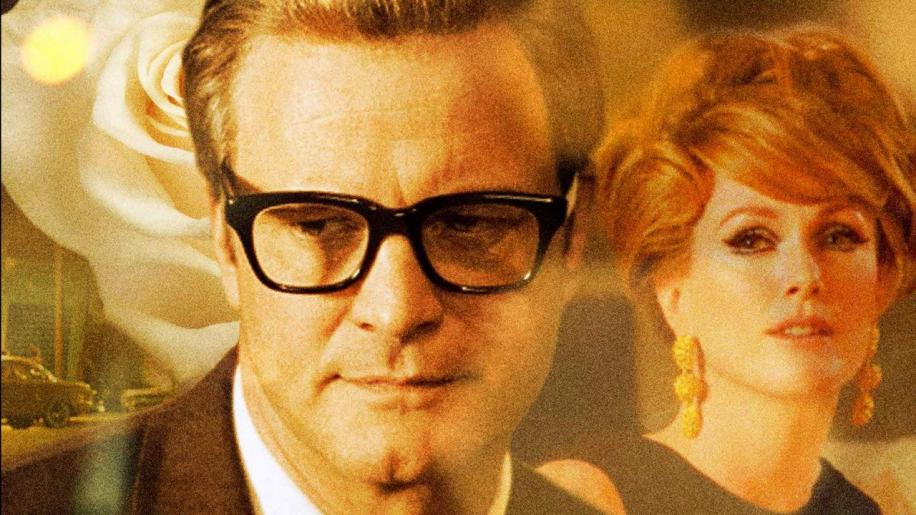 Back at the time of this year's Oscars, Colin Firth's performance in 'A Single Man' was much lauded as was the way the film captured the look and feel of the 1960's.
While Mr Firth was nominated for an Oscar but on the night failed to walk away with a statuette, he probably wasn't too upset as he subsequently won the BAFTA for Best Leading Actor. Well, it'll give him somewhere to hang his tie. When there's this amount of fuss, I reckon there's usually something at the bottom of it, so I was pleased to see the movie's arrival on Region B locked Blu-ray giving me a chance to find out.
Since his performance as Mr D'Arcy in 'Pride And Prejudice', Colin Firth has been saddled with the 'thinking woman's crumpet' label that has done his career absolutely no harm whatsoever - indeed it has kept him busy with roles in the two Bridget Jones films, 'Love Actually' and the recent, pretty dire St Trinians revival. All the same, you get the feeling that Mr Firth has been on the lookout for a role that would take him away from the usual kind of thing that producers have been offering him. 'A Single Man' gives him that very opportunity.

He stars as George Falconer, a College Lecturer in 1962 Los Angeles, where the Cuban Missile Crisis is on everyone's mind and the fear that the world might end tomorrow seems a reality.
He receives a call to let him know that Jim, his partner of 16 years, has been killed in a car accident and that the funeral is for family only - so he's not invited. This reminds us that the story is set in a time when views on homosexual relationships were not quite as liberal as they are today and that despite losing his true love, Jim's family cannot find it in their hearts to allow him to grieve with them. The camera stays on Firth's face as he receives the phone call with the sad news and we witness an acting master class as he goes through the realisation while trying to maintain a modicum of dignity and civility.
I've often thought that Colin Firth had a permanently deactivated emotion chip as his characters always seem to be remote and aloof with the kind of reserve you'd expect in a 1950's British Bank Manager - although he did rather let his hair down in 'Mamma Mia'. With 'A Single Man', he proves that he can display the full gamut of emotions - and this is what makes the movie so watchable. It's his acting ability that communicates the fact that this is a movie about love and it doesn't matter whether it involves a man or a woman, the desolation felt with the loss of a partner is just as devastating.
He methodically goes through the planning of taking his own life and he does so in a professional manner. No! Don't switch off! While this film may be about someone living out their last day, it's not the depressing experience that you'd expect. The film is peppered with wry observational humour.
When he asks for bullets for his gun in the hardware store, the assistant tells him it's a very old gun and suggests he might benefit from their two for one deal on handguns.
Shades of 'Bowling for Columbine' here, perhaps?
The scene where he tries to work out the best position for blowing his own brains out is of the black humour variety. He can't get quite comfortable enough. Should he hold the gun this way or that way? Then he's interrupted as the phone rings, reminding him that he's late for dinner.
His life is shared sporadically with Charley (Julianne Moore), an old friend who wants everything in life but she can't get what she wants - so the two have dinner and get drunk together. These are two people who are comfortable with each other, having shared a dalliance and are still good friends.
He has various encounters with other men and it's all tastefully handled - focusing on the friendly chat rather than a 'Brokeback Mountain' approach.
He has a Teacher/Student relationship with a young man, Kenny (played by Nicholas Hoult), who seems to want to get to know him better. The two have drinks and end up going skinny dipping together. Will this be the beginning of a new relationship and a new life for George? Watch the movie and find out.

Throughout the movie George's feelings are depicted visually by the change from a washed out, bleached image full of grain to one where we are treated to warm, more saturated colours and skin tones. This is clearly a device used by first time feature director Tom Ford to attempt to involve the audience in the emotions of the character by getting them to relax as the mood changes from coldness to warmth. It gives us the feeling that Firth's character is coming alive again - beginning to see a reason to carry on. That colour is used in this way should come as no great surprise when you consider that Tom Ford was Creative Director at Gucci. The whole production is very stylish and recreates the feel of 1960's California with great accuracy. Apparently the team responsible for the look of the film also worked on the TV series 'Mad Men' - another 60's era based production.

The screenplay was adapted by Tom Ford from a novel by Christopher Isherwood and the way it's written makes it all feel very natural and believable but with a slight edge of unease.
While the film is made with great care and attention to detail, I felt that I wasn't truly drawn in and was merely an observer of the events playing out before me. In this respect it has a slightly clinical detachedness and although I could see how much George was hurting - I couldn't really feel it quite so deeply. We hope that things will work out for him and our apprehensions that the film may go over the top with each new personal encounter are unfounded - such is the sensitive handling of those scenes.

Strangely, for all I felt that I was not massively affected by 'A Single Man' at the time of viewing, it has since caused me to reflect upon various aspects of life and the close up of Colin Firth's face as he received the phone call about the death of his partner remains in my memory. It made me think about living life as if each day was my last and while that would be truly wonderful, in reality it's a romantic notion that doesn't involve things like bank accounts. However, Tom Ford has achieved something great in producing a movie that causes us to reflect upon our views of life - and that's something that raises this movie way above the norm.
It's probably not the kind of thing that will appeal to lovers of mind numbing, CGI laden blockbusters but for those of us who like to use our brains rather than sit on them, it's very thought provoking.