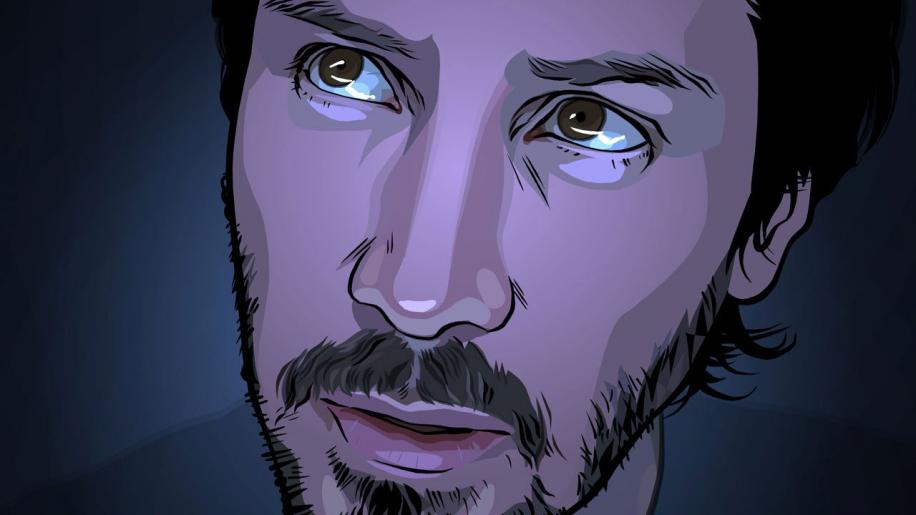 A Scanner Darkly is presented with a digitally perfected 1.78:1 aspect ratio anamorphically enhanced widescreen transfer. The line detail is excellent, with no softness or edge enhancement or grain, or anything else you might quibble with on a live-action alternative. The colour scheme is broad and luscious, with solid tones and blacks allowing for picture perfect night-time sequences and shadowing. Overall it gives you the impression of a 'perfect' comic book brought to life. We get a solid Dolby Digital 5.1 offering to accompany the movie, with clear and coherent dialogue emanating mostly from the frontal array. Effects are normally quite subtle, but always come across as well observed, and the score perfectly suits the material, ranging from the quirky to the emotive but always playing to enhance the theme of the relevant scene. Since the visuals often distract you away from the fact that this still has many of the facets of a 'normal' movie, it is easy to overlook the quality of the soundtrack, which does a superb job at assisting in bringing the whole production to life. First up we get a Commentary by Screenwriter/Director Richard Linklater, star Keanu Reeves, Philip K. Dick's daughter Isa Dick-Hackett, Producer Tommy Pallotta and Philip K. Dick Historian Jonathan Lemme. They talk about how personal the story was, with the daughter relating stories about her father's real-life friends, who the characters were based on. They also discuss the technique used to bring the story to life - the 'animated live action' look to it, including particular note of the scramble suit. The narration does not really flow that well, but occasionally the contributors continue each other's line of thinking, as opposed to just leaving a pregnant pause and then sending the Commentary in a completely different direction. Overall it is a very interesting offering that is worth sitting to, particularly to get the personal insight into Philip K. Dick from those on board who knew him very well.

One Summer in Austin: The Story of Filming A Scanner Darkly is a twenty-six minute documentary on the production of the movie. Kicking off with clips from an archive interview with writer Philip K. Dick himself, talking about the book, we get the cast and crew (and friends and family) discussing this endeavour. There's lots of split-screen comparison shots between what was filmed and what was going on on-set, as well as outtakes and rehearsals, with all the main cast explaining what they took from their participation in this production. A nice, montage-heavy but nonetheless informative documentary, this adopts a video-diary approach (with a quaint little score) to chart the path this took from page to screen and is very interesting.

The Weight of the Line: Animation Tales takes twenty-minutes to look more at the post-production side to this affair, with an in-depth look at the surreal imagery, strange sci-fi characters and other work that was put together to bring Dick's book to life. We get many of the digital techniques broken down, with introductions to most of the animation crew and an insight into the visual effort involved. Again, the Featurette is done in a very video-diary style, with almost constant aural narration from the various contributors as we see snapshots of the crew in action, creating their art. For the many fans that are particularly interested in the whole Rotoscope affair, this will be a compelling, must-see extra.

Finally we get the original Theatrical Trailer, although there are a couple of Trailers on disc startup, including ones for the unnecessary Wicker Man remake starring Nicholas Cage (between this and Ghost Rider he appears to be making some rather strange movie decisions), Final Destination 3, The Promise - another wire-fu 'epic' and the low-budget slasher Rest Stop. A Scanner Darkly is a very capable interpretation of one of Philip K. Dick's most personal, and potentially, most unfilmable works. It features some decent performances, a good script and an innovative visual presentation, but does feel a little rushed towards the end, where the whole intention of the drama appears to change. Rather than just an observation of a drug-addled society, or a commentary on self-awareness, or even a look at the reality behind the paranoid feeling that 'somebody is watching me', the twists at the end of this tale give it a much grander plot that somehow does not suit the close-knit atmospheric feel at the outset. From a technical standpoint the DVD has decent enough specifications on the audio and visual front, with a few nice extras - not least the multi-participant Commentary. Overall fans of Philip K. Dick and of decent sci-fi should already have this in their shopping trolleys, and everybody else tempted should definitely at least give this a rental.