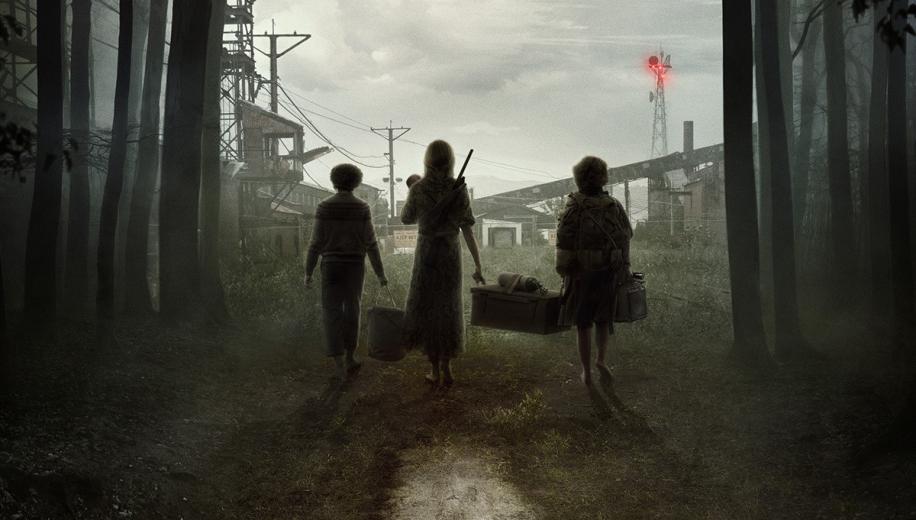 An exercise in breathless tension and masterful sound design (as well as in narrative contrivance), A Quiet Place made huge waves when it was released in 2018. John Krasinski, then just ‘Jim from The Office,’ gave what could have been a generic monster movie a shot in the arm with his sensory deprivation twist, opening up the field to slew of new generic monster movies with sensory deprivation twists. A genre which Part 2 is very firmly a part of.

Immediately, following the events of the first film, there is no way that the Abbott family can continue to live in the basement of their ruined farmhouse. They have no choice but to pack up and look for a new safe haven. But humanity isn’t quite extinct yet and before long the group bump into Emmett, a friendly face from town living in the airtight vaults under the ruins of an industrial estate. But Emmett has a stern warning: the aurally super-sensitive aliens aren’t the only monsters out there.

John Krasinski here continues to demonstrate his solid, practical approach to direction and film construction. The family, broken up into three separate stories by the second act, all have a piece of the puzzle, a little side quest to complete and Krasinski’s focus, as with the first, is mostly on efficient plot driving. As well it might be; at a slim 95 minutes there’s little time to hang around making subtle points out of things. It feels refreshing to see a film so clearly stripped back to its essentials, especially in contrast to the recent spate of bloated or indulgent genre horror releases; the more-is-more attitude of Ari Aster or Zack Snyder (yes, I did just group those two directors together. Yes, I feel a bit gross now.) Part 2 knows where it’s going, and it knows how to get there. Where it struggles is in convincing that ‘there’ is a particularly interesting place to go.

well executed but often without [...] underlying vulnerability or cohesion...

While these side quests which split the family up to search for more people, find medicine and keep the baby safe feel a little mechanical, the monster encounters along the way still thrill as effectively as they always did. There’s also a fun new elemental twist to the set pieces which manifests itself in each of the individual sub-plots resulting from the family unit being separated. It’s not just sound which puts the Abbotts at risk now: air, fire and water all present their own threats. These are floating moments, thematically detached from story, but ones which add a little spice to what could otherwise be a pretty mild film, well executed but often without the underlying vulnerability or cohesion that aided in the success of its predecessor.

There is also a brief and unexciting dalliance with an underdeveloped “people are the real monsters” trope which would seem tacked on, had it not been set up like Chekhov’s Gun from scene one. Thankfully, the tension that made the first film such a riveting watch always returns and, at its breakneck pace, there’s little time to really dwell on any of these individual awkward elements.

Most iconic among all the unlikely tension ratchets in the first movie, the “nail scene” has become a go-to reference for hilariously contrived moments that, despite themselves, pack a cinematic punch. It’s a truly ludicrous moment but within the bounds of the movie, you feel it; you know you would scream. How could you not scream? The delight Krasinski seemed to take over elongating this white-knuckle moment was everything that made the film good. Part 2 is sadly missing its own defining “nail scene.” There are moments where bad fortune, inattentive characters and pure stupidity, combine in a very similar way, but not often with the same gleefully cruel pay off. The closest the film comes is in one of its final set pieces involving Regan quietly climbing across a table covered in very breakable, precariously balanced objects and it includes some of the most blatant trolling of a cinema audience seen in recent years, a wobbling stack of moments of stomach dropping delight.

A prior attempt at a similar compounding of misfortunes occurs when baby Abbott finds itself in peril, under the supervision of brother, Marcus. But in this instance it feels uncomfortable rather than actually scary and unlike “the nail” which has you feeling for Evelyn, and “the desk climb” which has heart in mouth for Regan, it has the unintended consequence of turning the viewer against Marcus for making such stupid choices. With the cast so broken up, and with such a tight structure, there’s little room to manoeuvre for misfires like this.

What made the original great [...] is absolutely still great here...

Sadly, Noah Jupe’s character Marcus is still something of a weak link in general and struggling to find him something to do backfires for the film on two separate occasions. It's unfortunate, particularly as the performances of the other cast members have only improved between films. Millicent Simmonds particularly is able to shoulder the most interesting elements of the plot, more than coming through on the promise her previous performance made. Emily Blunt remains steadfastly convincing as a devoted whatever-it-takes mother and John Krasinski – here showing up in the exhilarating prologue teased in the trailers – is certainly more Jack Ryan than Jim Halpert.

New additions include Cillian Murphy as fellow survivor, Emmett, and it’s pleasing to see him returning to an empty post-apocalyptic landscape not too different from the one which gave him his breakthrough in 28 Days Later. His surrogate father role for Regan in the wake of her father’s absence gives us the strongest interpersonal connection in the film. That’s a note that could be both praiseworthy of Murphy and Simmonds’ performances or damning of the chemistry between supposed mother and son Blunt and Jupe who seem to share barely any screen time.

What made the original great – its killer sound design, its efficiency, its scene-by-scene dialup - is absolutely still great here, but it’s familiar now; three years of Bird Boxes and Silences and other AQP spring-boarded movies have numbed us to the novelty of sensory deprivation horror. And because the novelty is gone, Krasinski’s weaknesses as a writer and director that have been carried over from the first film are more obvious. As obvious as the whiteboard which undoubtedly hangs in John Krasinski’s home office covered in scrawlings which say things like “Pattern – quiet, quiet LOUD” and “SEQUEL? – What is it about? Why? How much money can I ask for?”