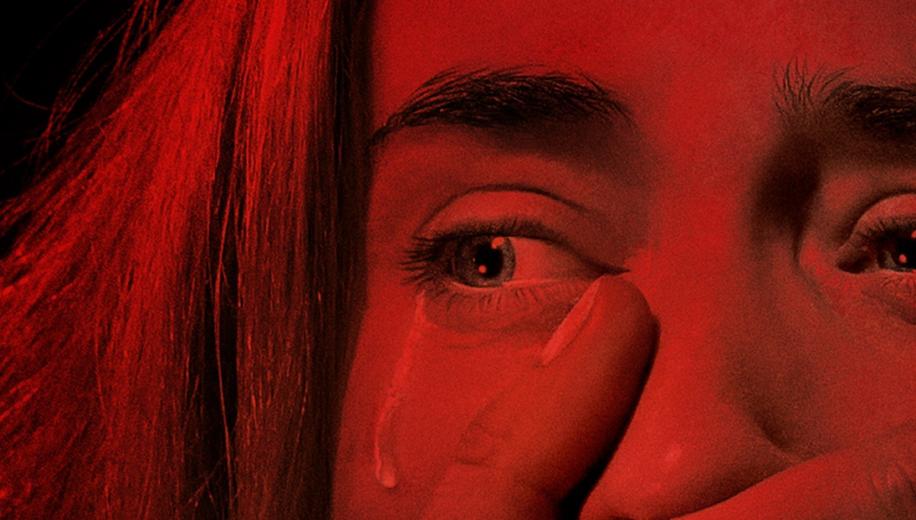 An ambitious project for a relatively new director to take on, particularly one who came up through primarily comedic work, Krasinski has clearly done his homework, taking note of the subversive traits and socio-political commentary that informed such recent gems as Get Out and Don't Breathe, and channeling clear love and respect for Jaws, all refocused through the prism of a terrified parent's eyes.

The end result, courtesy of Krasinski's rewrite of a spec script, is a striking little piece that works as a horror both literally and figuratively, playing out as a taut little creature feature as well as a symbol for the waking nightmare that almost every parent endures at one time or another.

Although there are similarities to other creature horrors, and A Quiet Place could be simplistically boiled down to Pitch Black by way of Don't Breathe, Krasinski establishes a fresh and distinctive feel, spurred on by the collaboration with wife Emily Blunt, and by the real-world young family they now have, bringing organic characters and family dynamic to a film where you might not expect it, and cranking up the tension to almost breaking point without relying on bodycount, gore, or monster mayhem to deliver thrills.

It's a hell of a ride; 90 minutes of near-silent running which will suck the noise out of living rooms across the land as viewers hold their bated breath over what will happen next.

A Quiet Place was shot on 35 mm film, but is capped by a 2K Digital Intermediate despite the potential for closer to native 4K resolutions to be drawn from the source. It's this 2K upscale which has been used here for the Ultra HD Blu-ray release.


It may not be a striking upgrade, but it's nonetheless the definitive way to enjoy the movie.

Although not a particularly high budget movie in this day and age, and certainly not one which will be notably celebrated for its visual design, A Quiet Place still enjoys a modest uptick in both detail and clarity on 4K, in comparison to its 1080p Blu-ray counterpart. It's hardly a striking difference, but it's there nonetheless, resolving the image with a finer attention to clarity and drawing out more detail from the shadows. Mottled strands of hair, grains of sand on the tracks, woodland environments and windswept fields enjoy better resolve here, looking more easily defined and afforded better focus in the 2160p image.

WCG, HDR and Dolby Vision do their best with the organically grainy material - it was grainy in the cinema so it's great to see it rendered faithfully here - eliciting more sharply resolved details beneath without ever resorting to any overtly intrusive digital manipulation, giving the mostly rural environment a healthy but natural look, with more striking differences noticeable at the white and black levels of the spectrum, affording the image brighter peaks and deep, inky blacks devoid of any kind of digital manipulation like crush, whilst a few gorgeous vistas and sunsets deliver sumptuous tones likely beyond the limitations of the standard Blu-ray's palette. It may not be a striking upgrade, but it's nonetheless the definitive way to enjoy the movie.

A Quiet Place is definitely a movie where sound design is key, despite the dialogue-less nature of the tense horror, with the desperate need for silence, and the slightest of noises, affording a much more attentive soundscape where the slightest seeming nuances get greater focus.

The 4K release enjoys a tremendous Dolby Atmos track founded upon an already reference Dolby TrueHD 7.1 core, blistering with edge-of-the-seat observation on the tiniest of aural objects, from hushed mouthed words and desperate sign language, pushing through the pain of labour in silence, whilst there is an immediate resolving of focus upon anything that does break the silence.


It's a great little track.

It's beautifully designed, and whilst hardly a bombastic affair replete with ballistic blockbuster fury, that doesn't make it any less impressive on the aural front, affording fine precision during the dominant silence, but bouts of intense music (which comes as quite a shock to the system, enveloping you utterly) and terrifying action. It's a great little track.

Nothing on the 4K disc, and only a trio of Featurettes on the accompanying Blu-ray.

Chocked full of memorable moments and standout setpieces, A Quiet Place benefits most from a commitment to character depth and natural family interaction, and even if you enjoy it above the level of its symbolic parental horrors - with Krasinski (and Blunt spurring him on behind the scenes) intent on emphasising the parental metaphors, addressing both the fear that even the slightest mistake on the part of parents could cost their children dearly, as well as the cost of said fear on both parents and their children - it still provides one of the most memorable horror journeys of recent times, sitting comfortably alongside its standout brethren like the recently Oscar-nominated Get Out. A minor future classic.


One of the most memorable horror journeys of recent times.