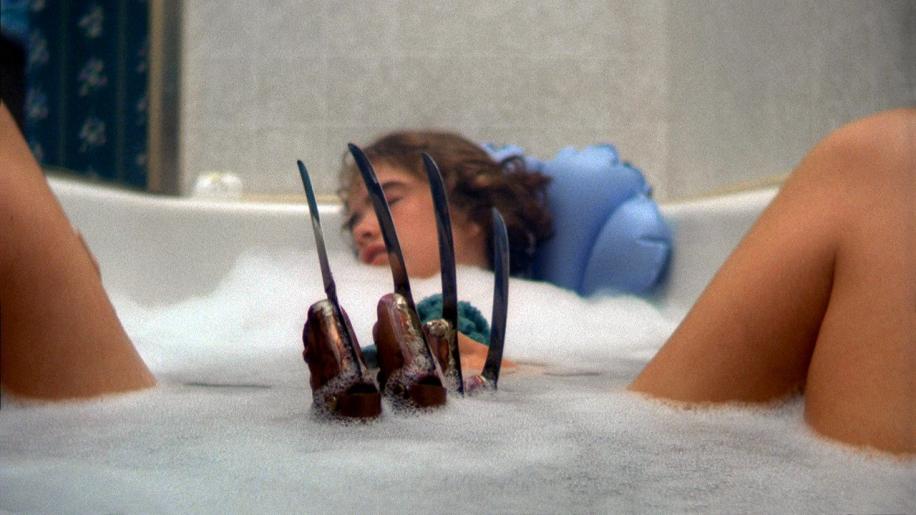 One, two, Freddy's coming for you,

So begins one of horrors greatest memorable lines, as well as a huge franchise which, without this movie, there would be no New Line Cinema and therefore, no Lord Of The Rings, although we also wouldn't have had several other classics, like Se7en and Lost In Space.....

Our story revolves around four teenagers, Nancy, Tina, Rod and Glen whom have all been suffering from nightmares, in fact the same nightmare with a guy who wears a dirty red and green sweater and has long fingernails, no actually more like finger-knives and scrapes them down pipes making a screeeeeeeech sound. Obviously, the teens don't worry about this slight coincidence and go ahead with their planned sleepover - meaning Tina and Rod get to make like bunnies. However, when Tina goes to sleep, she meets the man of her dreams again which culminates in her being tossed around the room and being bloodily slaughtered with large knife marks appearing out of thin air. All signs point to Rod being the culprit as he was the only person in the room with her, as well as having had a fight earlier with Tina, although as Nancy informs the police chief, who is also her father, that it wasn't that big a deal. This looks worse for Rod as he runs away from the scene, further making all signs point to him being the killer. So, while the police hunt our killer, Nancy still experiences the nightmares, finding out that the guy in a hat, that wears a green and red sweater is called Fred Krueger and starts to look into who he is as well as trying to ensure she stays awake.

Obviously, her father and mother notice young Nancy's behaviour, even if they are hiding a secret relating to Krueger. The revelation is soon revealed that Krueger had been behind the abduction and murder of several children, but a technicality had allowed him to walk free. This clearly wasn't going to sit well with the local parents, so they ended up burning him to death after they had tracked him down. Heck, Nancy's mother proves it as she's kept his glove (strange memento?). Now, he has come back to avenge his death on the children of Elm Street, first with Tina, then Rod, who was found hanged in his prison cell, the night after he was caught, leaving only Glen and Nancy to stop Freddy from his bloody revenge.

Although this may seem an obvious choice for a favourite horror, along with Halloween, Friday 13th and The Evil Dead, this is my choice out of all of those and indeed, of any other horror movie for one simply good reason - it scared me. No other movie did, has or probably will do and I can be sure that none will ever affect me in the same way. I remember watching this as a young-ish teenager, around 1985 when it appeared on VHS, it was a Monday night at around 9 PM an my father had gone to work, as he'd worked nights. I'd seen lots of other horrors and my elder brother was recommended this, so, with my mother, we sat and watched this movie. It gripped us, watching in silence, jumping at certain points and when it ended, we watched Danger Mouse cartoons for 20 minutes, because it freaked us (not my mother) out that we wanted to come down from this scared buzz we had. Ok, now you've heard my most embarrassing movie story, I'll tell you why it worked for me and possibly others. How scary is it, to be attacked at your most vulnerable - a state of unconsciousness? At a time when you can't run away, defend yourself or rely on anyone else to save you? Very scary I'm sure, especially when you aren't even in control of the dream. Our demon, nemesis, whatever you want to call him, isn't making with jokes, quips and one-liners which he did in the sequels, oh no, Freddy is a dark, twisted killing machine who enjoys the game of fear and plays it very well. He is truly a monster, more scary than Jason, who was a little ticked off due to drowning, more ruthless than Michael Myers, who never quite butchers his prey as Freddy does and let's not forget that our favourite 'bastard son of 1000 maniacs' was a predator for young children before he became this dream demon. No, death didn't stop our Fred and death didn't twist him into something evil - he was already there.

OK, so it's a little dated now, being 20 years old and as with most horrors of the time, this is strictly B-movie casting, with mostly unknowns in the lead roles with John Saxon the only real name you knew, but this was a very young Johnny Depp's debut movie, so this gave him his first break literally, although he wasn't the first and he won't be the last. Sure, the talent isn't classic DeNiro, but as the narrative is strong and the tension levels turned up nicely during the running time, in fact this movie only has a body count of three. Yes, you heard me, three, but two of those deaths were, for the time, pretty creative from the bloodbath bed to the clever effect of Tina being hurled around the room (which incidentally cost so much money, the same room was used in the Lionel Ritchie video for Dancing on the Ceiling.) No this movie didn't need a body count, it just employed a psychological technique to keep you tense and on edge as well as keeping the monster in the shadows for the most part. Then, just when you thought that dreams were the only unsafe place, they switched track by showing that thing from the dream world could be brought through - meaning Freddy could be made corporeal, if he was being held or he was holding you when you awoke. This made the finale potentially interesting - what would happen if our heroine lost? From the opening scene where we see the creation of the infamous glove to the end scene where life seems to be normal, this is a superb rollercoaster ride of a movie. Well, when I say normal, as with most horrors the villain always seems to have the final word.Director Wes Craven, who has made several of the most well known horror movies, such as The Last House on the Left (with Sean “Friday 13th” Cunningham), The Hills Have Eyes, Scream and most recently, Cursed and Red Eye but in my mind, he's never quite reached the dizzy heights of this movie - even though I really like Scream, due to its knowing nods to horror movie lore and a half decent “new” villain in Ghostface but with that movie, as with this, it suffered from sequel-itis, which caused more damage to the franchises than it should have, although Craven only dealt with 2 of the 6 sequels and in his defence, the New Nightmare can be seen as a precursor to Scream and several other more reality-based horrors, but that movie is for another time. Here we have some nice set pieces, from the Tina scene and the Johnny Depp bloodbath scene, but there are equally some equally as cool, but not as well remembered scenes such as Nancy in the bath or the bodybag-in-the-hallway scene, which the first could be seen as a sort-of homage to Psycho and its shower scene, the latter is certainly quite innovative as well as being quite provocative image-wise as we see the bag moving across the floor, leaving a trail of blood behind, akin to a snail trail and who could forget Freddy bursting through the mirror while Nancy chants “It's just a dream, it isn't real”? Shades of Wizard of Oz with no place like home? Sadly she can't click her heels together for it to go away - Freddy is indeed coming for you.