A methodical thriller with a grinding and relentless tension throughout. 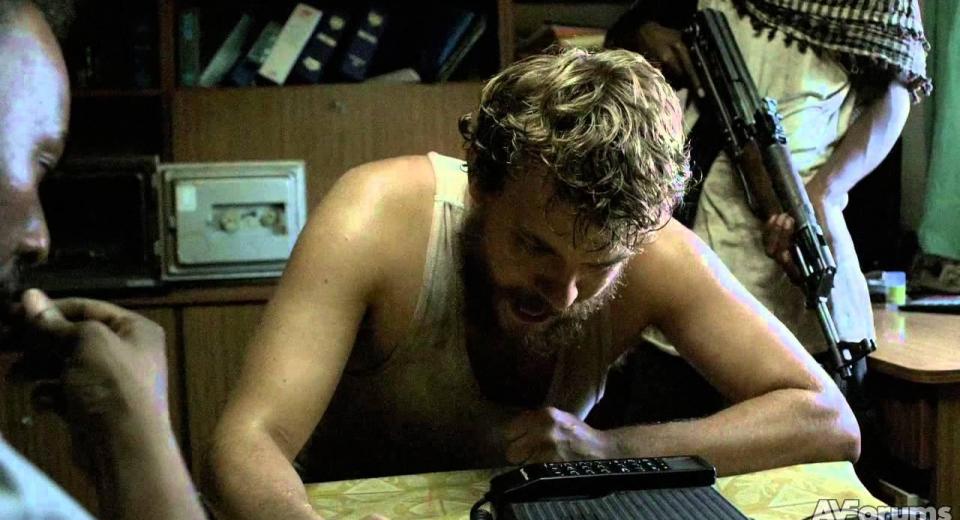 A Hijacking is a potent depiction of a modern day pirate negotiation situation. It offers a pungent and scarily realistic rendition of life aboard a hijacked vessel, a Danish cargo vessel called the MV Rozen, where 7 crew are held captive by Somali pirates in tight and claustrophobic conditions. It rather cleverly manages to pace itself in an intriguingly refreshing sort of way, by not focussing solely on the captives aboard the ship, but also offering an intense and visceral look at the harrowing experience for the family and, in this case, the CEO of the shipping company back in Denmark. It's a genuinely uncomfortable and terrifying emotional powder keg that has us beside ourselves with sweaty anticipation the whole way through.

The pulsating narrative ebbs and flows between two tightly shot scenarios, predominantly from two very different perspectives, both expertly crafted by Director Tobias Lindholm, who has a little experience in this verite-style pseudo documentary drama having penned the brilliant “The Hunt” and had his directorial debut with the lauded “R”. Here, Lindholm steers the ship wide of the siren calls of Hollywood style heroics and brilliantly manages to avoid any and all cliché from start to finish. This is not an action piece, this is a thoroughbred thriller, and it focusses on the human side of the ordeal, somehow managing to find a balance between the intense, grinding nature of life aboard the captured ship, and life back in the sweaty and enclosed negotiating room. It's delicately handled, but sure-footed enough to have us convinced that what we're seeing is genuine and believable. It's almost Documentary style, and in fact, I believe that some shipping companies actually use the film as corporate training on how to handle such incidents, though I couldn't say whether this is effective, I can say for certain that if you happened to be new to the shipping industry and this got shown in one of the training days, you'd need a serious pair to show up on your first day.

It seems very much that the key element in making this approach work was illustrating the duality of the situation - the audience gets a real sense of what it's like in both scenarios. We feel comfortable in neither, and that's really where we find ourselves emotionally connected to each of the central characters – we see the situation unfold from both perspectives, and we see how little each side understands of the other.

Mikkel (Pilou Asbaek), the ships bubbly and jovial cook is the main focus aboard the ship. He's terrified and fears only that his wife and daughter will never see him again. His experience is confined to one small room he is forced to share with two crew mates – one of whom is the ship's captain whose health is gradually deteriorating. Mikkel is brought out only to cook for the pirates, and to act as intermediary for the ships crew when the pirates are negotiating. Then there's Peter (Søren Malling), the company CEO responsible for the ship. Deciding to take the negotiations on himself, his experience is immensely stressful and at times utterly harrowing. His employees remain the focus for him, but he is taking advice from an expert who tells him that if he does not negotiate and simply agrees to pay the ransom, the pirates will see that as weakness. Peter's dilemma is one of unimaginable stress and Malling's performance is at times, deeply moving. Whilst the two situations are very different, they share many similarities that only the audience can observe. It's in this style of connected narrative and juxtaposing scenarios that Lindholm shows a great deal of confidence and ability.

It's not just his obvious capability with tension that's on show here either. There are some true moments of cinematic majesty that speak to us of the poetry and solitude of the open sea, the peril of the powerful ocean, and the beauty of the beckoning horizon. It's a graceful hand that manages to evoke such depth and wonder through the lens, and Lindholm's transformation from scribe to helmer is certainly one that cinema lovers will welcome.

A Hijacking is a methodical thriller with a real nail-biting atmosphere throughout. It uses some great techniques that Lindholm has employed to make the experience as nauseating for the audience as one would expect – hand-held cameras, bobbing up and down with the movement of the ocean, intense and extreme close ups, underlining the claustrophobic conditions and remind me of a Paul Greengrass film. In fact, I feel confident enough in saying that although I'm sure Greengrass's alarmingly similar “Captain Phillips” is one I'm eagerly anticipating, I expect to find myself musing at the fact that I'm glad I watched this one first. It's raw and it's bold, and it's everything that a movie tackling this subject matter should be. It's brave, and it's successful. Thoroughly recommended, but certainly not for the feint hearted.