A Good Day To Have Low Expectations. 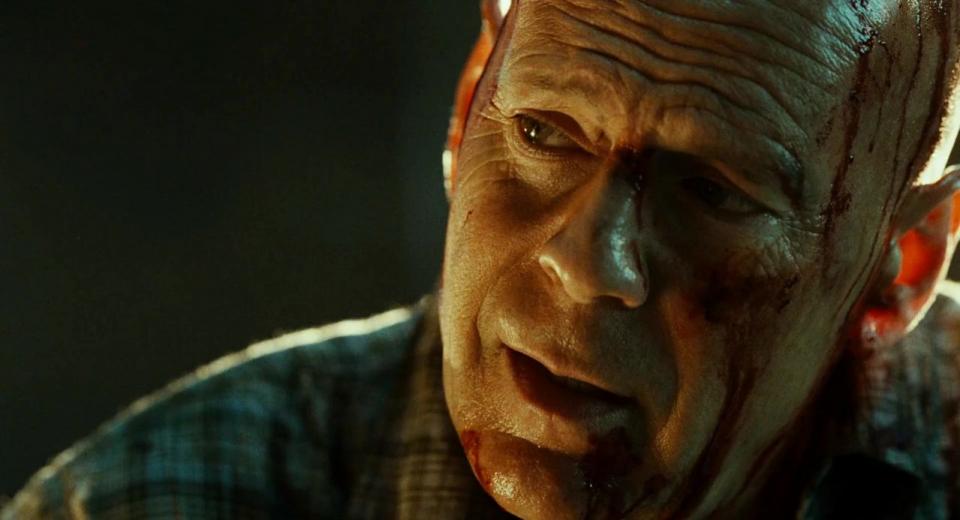 Hitting UK shores with a Region Free (or at least Region A and B compatible) release, the video presentation matches up to the preceding US counterpart, boasting an impressive 1080p/AVC encode in the movie’s original theatrical aspect ratio of 1.85:1 widescreen. Shot on 35mm film stock, A Good Day to Die Hard doesn’t really match up to many glossy new blockbusters in terms of shimmer and shine, instead going for a very gritty style (shame they didn’t adopt this for the tone) which takes a little getting used to. That said, this is precisely the way that the movie was intended to look. Besides the detail level is still strong, allowing for excellent facial close-ups, observing the lines webbing Willis’s visage, or the varying degrees of facial hair on the characters, and taking in the clothing textures and set nuances, even if the longer shots use the ambiguous nature of the gritty, grainy style to more effectively blend in the visual effects (which works well). More importantly, there are no sign of any digital defects: no edge enhancement or unruly, excessive DNR, and no banding or crush. The saturated look predominately goes for cold blue exterior shots or warmer sepia interiors, again all stylistically intended, but the colour palette itself is rendered well, allowing for some bright and vivid tones in the mix, and leading up to strong, intense blacks which still offer up exceptional shadow detail. Whilst not technically the kind of film presentation you’d normally use to show off your kit, it would be hard to regard the rendition here as much less than a stunning representation of the directorial intentions. In that regard it earns itself a near-perfect score. Similarly the DTS-HD Master Audio 7.1 track matches up to its US equivalent and delivers a flawless accompaniment that is brimming with equal parts intense bombast and surprising attention to detail. Right from the get-go we are presented with a wonderfully-designed soundscape that makes full use of the array – often stirring those rears into action in ways that will literally leave your head spinning. Dialogue comes across reasonably clearly and coherently – better than the cinema effort, although Willis’s mumbles still require use of the subtitles to catch every single line – and gets channelled predominately across the frontal array, and the persistent, ever-accelerating score further adds to the heady, overwhelming atmosphere, but it’s the effects coverage that deserves the biggest acclaim. Not just the bigger noises, which tear up your living room with huge shells (if you think that the Hind’s guns sound powerful, wait until the Halo starts putting holes in your walls with its slow-repeating cannons!), or even the multiple assault weaponry skirmishes strewn across the piece, where automated gunfire with hail down around you, but also the smaller touches: car horns beeping across the rear channels or a flock of pigeons fluttering overhead (out of sight) which light up the rear right channel. The potency is a marvel, but the precision is even more impressive, and is what pushes this track up from demo quality to perfect-10 reference status. Again, matching up to the US counterpart, we get the same comprehensive – and largely impressive – collection of extra features. The Audio Commentary (available on the Extended Cut only) has the Director team up with his First Assistant Director to talk about their work; looking at how they put together some of the bigger action sequences, although steering clear of the work down beyond that to make this a worthy Die Hard chapter. Seven Deleted and Extended Scenes show up a quarter-hour of new footage, most of which is throwaway but a hint of which could have been incorporated back in (although still no sign of those lines of dialogue / shots from the Trailer) – Jack scoping the embassy and Cole Hauser’s CIA Agent briefing would have slowed the credits to a crawl, and the alternative intro to McClane may have been a little too subtle for wide audiences (and the Russian air-heads bit was pointless), but then we get a better set-up for the safe-house ambush and quite a witty little scene in a Russian gunstore “What about Dr. Zhivago here, doesn’t he have about a zillion dollars?!”. There’s also an extra fight scene, where the McClanes take on a couple of Russian gangsters; it’s a nice bit of action, and the film needed more actual fights featuring Willis, but the comedy tone was all wrong. Making It Hard to Die is a 15-part Making-of Documentary passes the hour mark and delivers a comprehensive background detailing into the production (although it doesn’t really dip too far into the pre-production work), which plenty of trivia about the effects work and stunts. There are also a number of accompanying Featurettes, which range from the excellent stunt-focussed Anatomy of a Car Chase – that’s almost half an hour long – to the 7-minute-long shorter pieces on McClane’s return (Back in Action); the father/son double-team (Two of a Kind) and the trio of Russian villains (The New Face of Evil). Then Pre-Vis Sequences spends 12 minutes looking at the CG animatics for two main scenes from the film, and one which was never filmed and VFX Sequences offers up a further 5 minutes of visual breakdowns for over a dozen shots. The Storyboards show us the draft versions of five sequences, whilst the Concept Art Gallery looks at the early images created for the production, with the disc rounded off by a couple of Trailers. Finally it’s worth noting the underrated Maximum McClane option, which, whilst disappointingly not being a Maximum Movie Mode option like I’d hoped, is actually quite a nice little 4-minute compilation of some of the best bits from all the movies. A Good Day To Have Low Expectations.

I’m not going to come out of the underdog corner, fists blazing, trying to argue that this is somehow a good movie, let alone a good Die Hard movie. From an action standpoint, fans of the start to Expendables 2 and the end to Live Free or Die Hard should be thoroughly entertained. Unfortunately the characters – in particular the villains – are woefully underdeveloped and the story takes a distinct back-seat to the non-stop spectacle. Even the one-liners are disappointing. Still, low expectations work wonders. They make this disappointing fifth entry an easily bearable, oftentimes even enjoyable little actioner – one which probably didn’t quite merit a full-price trip to the cinema, but may well still provide entertainment in its uncut, extended, home release.

On Region Free UK Blu-ray we get a mirror-image of the US release, complete with both cuts of the film – the Uncut Theatrical Version and the Extended Cut – as well as superior video, stunningly immersive audio and an impressive boatload of extras, all of which make this a must-have package for the few ardent fans of the film that there are out there. Those who were sceptical about seeing this at the cinema may be rewarded by seeing it uncut for the first time here; those who were utterly disappointed first time around are unlikely to find any great redemption in the misleadingly-titled ‘harder’ extended cut, but if you were on the fence, then these uncut variants may just swing you to being more forgivable towards this fifth entry. At the very least it sets the bar pretty low for the next entry and, if you’re in the right mood, you may just enjoy McClane’s ill-advised foray into Russian mayhem. Probably A Bad Day To Avoid Disappointment.