A Force of One Blu-ray Review 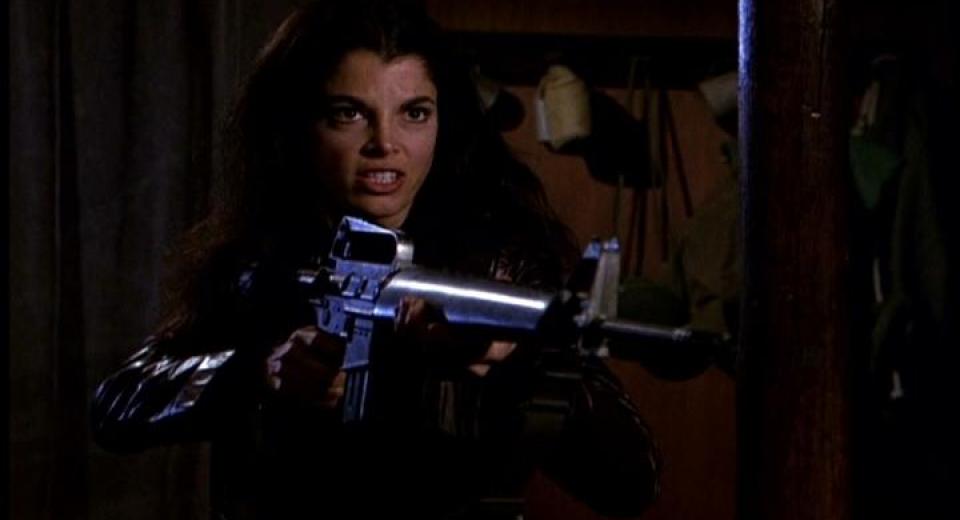 A Force of One hits back from a 1.78:1 image that has been encoded via AVC.

Nobody is ever going to say this is hi-def gold, but once you acclimatise to the vintage photography and colours of the flat late seventies low-budget aesthetic then you are sure to see that this is actually a very reliable and consistent transfer.

The image has grain to provide that all-important texture, and some small elements of age-related pop and fleck damage, so there is no overt noise reduction to wax things over. Detail will never be revelatory but you should still be impressed by some of the clarity and texture that is to be found in the close-ups. Even sans beard, the mighty Chuck has plenty of follicle separation to provide a satisfying level of finite detail, and you should notice that there is appreciable sharpness and subtlety afforded the eyes, particularly those of Jennifer O’ Neill and even Bill Wallace as Sparks. But the image certainly loses a sense of vividness because of the profoundly flat and unambitious photography. Although Paul Aaron likes his long-takes, with that opening shot that tracks the skateboarding drug-peddler along a bustling city street for a couple of blocks, the opportunities for the transfer to reveal substantial depth are very few and far between. The film is shot like a TV show for the most – bright, plain set-ups that group everything front and centre, and staged with a lack of imagination in the deeper compositions. There is a hazy quality to some of the shots in the ring, but this is intentional and down to the source lighting and how Aaron wants to depict the glitz of spectator sport.

I wouldn’t say that contrast is exacting, but then it isn’t being challenged all that much. Black levels are certainly decent enough to help maintain some shadows during the night-time scenes and the shots of cops creeping about shady locales, but this a drab looking film that doesn’t demand much from its textural shading. Colours are bright and cheerful during some scenes – a Mexican festival, say – and the gaudy fashions of the era are brought to glaring life, including the tracksuit bottoms of the fighters in the ring, but whilst the primaries look reasonably bold the picture remains mostly on the tame side. Skin-tones aren’t too bad. Chuck’s ruddy complexion comes over well, as well as the swarthiness of various other characters, and the paleness of O’ Neill.

When we see Logan and Mandy as they are driving along in a cop cruiser the image develops a faint interlocked pattern all the way across the screen. Fear not. This is the pattern on the inside of the windscreen that we are looking through, and not some errant lacing effect that the disc has inadvertently thrown up.

Happily, the transfer hasn’t been mugged by any digital gremlins. There is nothing to worry about with regards to edges being enhanced, or any banding or boosting, and only the faintest trace of aliasing seems to occur. A Force of One gets a respectable video transfer that doesn’t attempt to embellish things with anything untoward. A grizzly bear once threatened to eat Chuck Norris. Chuck just showed the bear his fist, and the animal then proceeded to devour itself because it would be a far less painful way to die. FACT.

Anchor Bay gives us two audio options here. There is an LPCM stereo mix that is probably an extension of the original mono track, and a fuller-sounding DTS-HD MA 5.1 variation that fills in a few blanks and dead-spots and makes an attempt to provide a little more oomph to Chuck’s fist-and-foot-aided unravelling of the mystery killer.

But I’m afraid the best track to go with is the stereo, which I would recommend over the 5.1 mix any day. Neither sparkles in any way, but the stereo track is more believable and probably a whole lot more faithful to how the film should sound. Dialogue doesn’t receive the sharpest delivery, but then having Mr. Chucky Mumbles in the cast isn’t going to help. No, seriously, there are no errors with the transfer when it comes to the speech, but it isn’t given much priority. Separation is there, but this is hardly the sort of mix that favours dynamics, or much in the way of a stereo spread. I doubt that you would have much to complain about, though.

Moving on to the 5.1 track and there are a few issues.

There are lots of little “shufflings” and “crunches” that seem to get thrown out during the surround mix. Now, to be fair, this sort of thing isn’t happening all the time and it is not that loud. But, once I’d clocked this aberrant additional and unwanted material, I kept on getting distracted by it. There are other odd sounds – like hums and drones during some scenes set downstairs in the cop-shop – that simply shouldn’t be there. Anchor Bay used to do this sort of thing all the time with their DVDs, adding patently unnecessary and weirdly constructed surround mixes to films that only ever had mono tracks to be begin with, and it is not a welcome trait to discover here. It just doesn’t sound right. It is as though they have broken down and analysed the various elements in the source and then accentuated and emphasised various portions and thrown other bits out to populate the extra channels. Ahh, hang on, that’s exactly what they’ve done, isn’t it? Righto then.

Bass is underwhelming, but you wouldn’t have expected it to be otherwise. This said, the impacts of fists and feet in faces and bodies and the smacking that Chuck gives the speedball have just enough weight to satisfy.

Overall, this is hardly exciting stuff. But steer clear of the bogus surround mix and you should find that the audio sounds faithful enough. The Great Wall of China was originally created to keep Chuck Norris out. It failed. FACT.

Billed as the Ultimate Collector’s Edition, Anchor Bay equips this Chucky disc with a few nice extras. Besides a Trailer and a TV Spot, we also get a Making Of and a mini-doc, as well as a commentary from director Paul Aaron.

The Commentary has moments of interest – working with Chuck and the other fighters, the photography and the staging of the action – but these seem to amount to little more than a few anecdotes interspersed throughout a vast tundra of silence. As such this is a wasted opportunity from Paul Aaron who, elsewhere, comes across as quite a garrulous and enthusiastic personality.

The making of lasts for around 16 minutes and is actually quite interesting. It is packed with lots of clips to enliven the talking heads responsible for bringing American Films to glory, thanks primarily to the crowd-pleasing ass-kicking from Chuck Norris. Aaron talks about how he got involved with it, via his son, and we learn about how the karate champion turned action superstar was really willing to go the extra mile with the marketing. Although relatively short, and notably without input from Norris, this covers a fair bit of ground, and is well worth looking at.

The same movers and shakers crop up in the excellent documentary How America Changed Hollywood Forever. Running for just under half and hour, this details the conception of the film company, its groundbreaking marketing regime, its willingness to go coast-to-coast and state by state to promote their titles and how they took over the exploitation field with supreme ease and came to dominate it for a few shining years. I found this very informative and breezy, and quite candid. Although it would have been great to see Norris participate in these little features, they actually focus more on the ethics and style of the production company itself, which provides an angle that we rarely gain access to. This mini-doc also features on the disc for The Octagon.

There is also a Theatrical Trailer and a TV Spot boasting some massively over-the-top voiceovers.

Hey, at least we get something for what is a very low-budget, mostly forgotten actioner that, to be honest, really isn’t very good. Contrary to popular belief, the Earth does not actually spin. The sun rises and sets when Chuck Norris tells it to. FACT.

Steven Seagal had Above The Law, Van Damme had Bloodsport (or Break Dance 2: Electric Boogaloo or even Chuck’s Missing In Action, in which he had a brief cameo) and Jackie Chan had Master With Cracked Fingers. All less than illustrious starts that somehow helped to catapult them into the realms of video rental chart-toppers. But, before most of their revered features came into being, Chuck Norris inspired legions of porky Middle Americans, puny, picked-on school-kids, soldiers, law-enforcement agents and blue-collar workers to chisel their feet up in groin-straining swivel-kicks and to grapple with one another on the lawn, the lounge rug, in the playground and in the changing room. They’d revelled in the exotic and mystical prowess of Bruce Lee but, quite understandably, never even dreamed of being that destructively supple or athletic, and now this unassuming everyman had come along and shown them that we could all become lethal killing machines if our hearts were in the right place!

If only Chuck knew the mega-renaissance that he was enjoying with a bunch of lads from Merseyside at the moment …or that one of them in particular (me, of course) was busy growing a russet beard in his honour for the premier of Expendables 2, grooming a lazy, sun-kissed mullet, and practising his spinning roundhouse kicks. For me, the grandiose, bloated magic of the 80’s will never fade away. Sly. Arnie. And Chuck. A helluva lot of bullets and “a good supply of bodybags.” That’s all you need to relive those halcyon days.

A Force of One pales considerably when compared to the next film we’re going to take a look at in the resurgent Norris canon – The Octagon – and is certainly one of the most forgettable that he has done, but you can’t call yourself a true Chuck Norris fan if you don’t add it to your collection. Anchor Bay’s UK release offers a consistent transfer that is perfectly satisfying considering the low budget look and feel of the film, and a reasonable audio mix so long as you avoid the surround option. And we even get some extras.

It’s a blast from action’s past … but the punches feel pulled, and kicks feel neutered. But it’s Chuck Norris … and that’s enough for anybody.