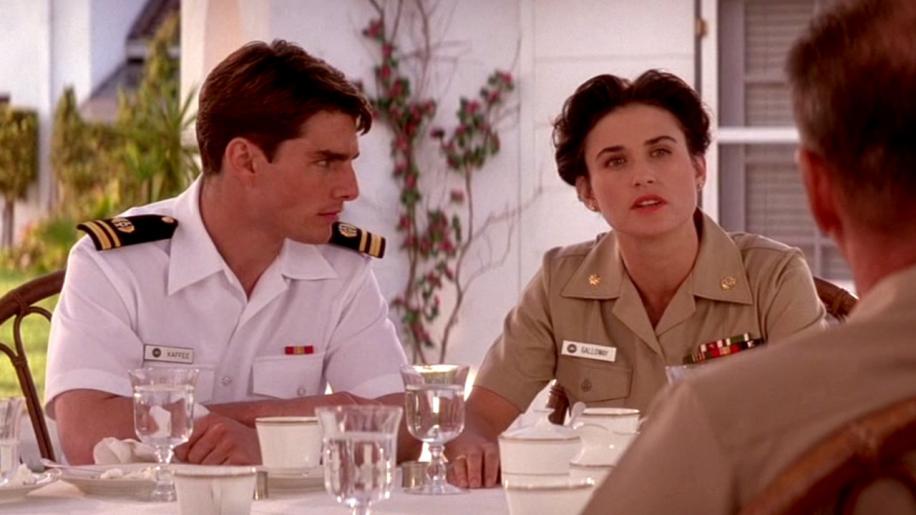 An early nineties classic gets a welcome release onto Blu-ray. It is unusual for a court room drama, based on a play, to achieve blockbuster status on the cinema screen, but this film did - and watching it again it is not hard to see why.

The original stage play was written by Aaron Sorkin, who went on to create the TV series ”The West Wing”. I am sure that most people reading this will know the plot, but a very brief recap here will not go amiss. Hot shot young Navy Lawyer Lt Daniel Kaffee (Tom Cruise) is hired to defend two recruits charged with the murder of a platoon colleague in Guantanamo Bay in Cuba. The base is ruled with a rod of iron by Col. Nathan R Jessop (Jack Nicholson), who has a chain of command including Lt Jonathan Kendrick (Kiefer Sutherland) and Lt. Colonel Matthew Markinson (J T Walsh).

As investigations continue into the tragic events of the night in question, it becomes clear that events are not exactly as they seemed. There has been a cover-up, but just how far up the ranks does this cover-up extend?

As befits a film that originated on the stage, this is a film that focuses on performances above all else - and what a cast we have on show here. In addition to those already mentioned, large roles go to many luminaries of the craft. Kevin Bacon, Demi Moore, and Kevin Pollak all flesh out the main roles. It is apparent from beginning to end that the actors are really relishing the material, tearing into dialogue heavy scenes with gusto, ripping apart each other with words - desperately trying to shine in such stellar company.

I have never seen the play itself (it was revived in The West End a few years ago, but alas I never made it to the audience), but the film was adapted for the screen by Sorkin himself, and it is clear that he shows a good sensibility for the differences in the two mediums. It could have been that the film turned out to be a dialogue heavy succession of talking heads, but Sorkin expands the action well, moving outwards from the central courtroom onto the military base itself, the campus where the lawyers all work, and even inventing a news vendor to reflect Kaffee's turmoil back to himself.

Adding dimension to the central character battle is the relationships between the lawyer team themselves. Kaffee has inner demons, this is true, but the way he battles against them is extremely subtly done. In the wrong hands this could have been an obvious plot device but in the skilled performance of Cruise and the writing of Sorkin - it is never allowed to overshadow the film. The relationship between Kaffee and Galloway (Moore), his colleague, is also extremely well handled - hinting at a sexual tension - without ever becoming explicit in any way. They never even kiss, and only go on one date, but still the undercurrent shines through onscreen with an intensity that could easily have gone missing if the relationship was ever allowed to tip over into movie cliché.

A lot of this restraint is down to the Director, Rob Reiner. A Few Good Men was arguably the last in a series of high quality, box office hits that he produced through the late eighties and early nineties. Starting with This is Spinal Tap (1984), and taking in The Sure Thing, Stand By Me, The Princess Bride, When Harry Met Sally, Misery, and the film under discussion - it is a streak that arguably equals any output from any other director during the same period. He was a man who was at the peak of his craft, and the fact that he was able to bring so many quality performances out of his actors is testament to the man's skill.

The way that he shoots the piece enables it to transcend its theatrical roots. He shoots the film beautifully. Whether it is the teak and mahogany interior of the court room, the autumnal streets outside, or the mute interior of Kaffee's apartment, Reiner shoots every frame with reverence - composing each shot with care and attention. He also paces the film superbly. There is never a dull moment in the 140 minute running time, with each revelation given to the audience at the same time it is to the main protagonists, meaning that we are never too far ahead or behind events. This kind of film could easily have been a failure and it is testament to how well Sorkin and Reiner understand the medium of film that it is nothing but a success.

A Few Good Men has gained a great reputation over the years, and it is absolutely fully deserved. Extremely well written, well directed, and full of a host of great actors on top form - this is not only a film for movie lovers, but also a film for fans of great acting and writing too. Despite the profanity in the film (never unnecessary), this disc was watched by myself, my 70 year old parents, and a couple of friends in their mid twenties. All of us thoroughly enjoyed the movie.

If you have not yet sampled the delights of this film, then I strongly suggest you do so at the earliest opportunity. If you have, then should you upgrade to the HD edition? Well, read on to find out.