A Fantastic Fear of Everything Blu-ray Review 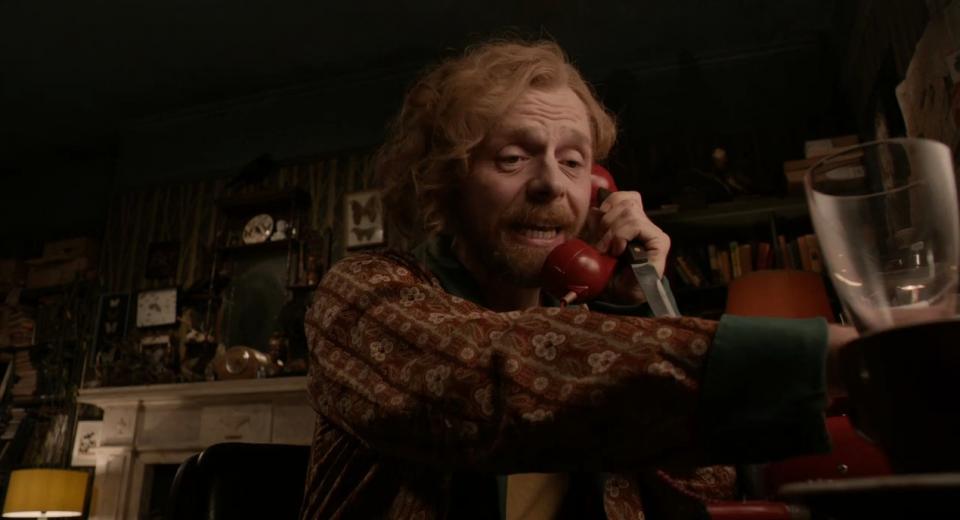 Filmed digitally the picture is every bit as bright and bold as you would expect for such a source as well as being very well detailed. The detail is apparent right from the first image (Pegg’s eye) which shows every crease of his skin, each individual eyebrow hair, each capillary and streaks of colour in his iris. And it does not stop there, you can, if you wish, pick out each individual photograph of the Victorian murders that are pinned to the flat wall, or wade through the ramshackle knick-knacks that proliferate throughout – clothing weaves are well defined, even the dirty mess that are Y-fronts, as well as threads on the threadbare carpets. Outside things improve even more, the detail of the photos on the wall in the restaurant, the grime of the laundrette or the sheen on the tarmac of the roads; it’s all sharp and holds edges extremely well.

Colours are vivid and strong with all primaries coming off with aplomb; reds are rich, greens are lush and blues are bold – each frame is bathed in light giving a near cartoon-esk look but it works very effectively. There is no wash or bleed to any of the colours and, at times, they shine off the screen.

Brightness and contrast are set to give excellent deep blacks still showing plenty of shadow detail and the film makes plenty of use of them, whether it is in the flat, or in the laundrette cellar. The deep blacks really add a punch to the picture giving added depth and pushing the already terrific colours further.

Digitally there are no compression problems, banding issues or edge enhancement. A fabulous picture for such a low budget film. I concentrate on the English DTS-HD Master Audio 5.1 surround track. Whilst this is not a big budget effects bonanza there are still plenty of opportunities to immerse you in the sound field especially in the early part of the film when the paranoia makes full use of the surround speakers with creaking floor boards, wind, doors closing etc. etc. Once the film ventures outside the surrounds are used to fill out ambience, with street noise, or restaurant background chatter which add much to the track. Separation across the front is wide and well defined. The score makes full use of the speakers and the few beat heavy tracks make the best use of the sub. Bass is somewhat limited, but it’s not that sort of film, though there are no LF effects to speak of (save crashing doors) it is used consistently to under pin the mix. Dialogue is clear and precise, sounds very natural, never drowned out by the happenings on screen and given directionality when needed. Perhaps just lacking the sparkle of reference this is nevertheless a terrifically understated track that will still immerse. A Fantastic Fear of Everything is a strange little film from first time director Crispin Mills that tries valiantly to sit in the horror/comedy hybrid. Telling the story of Jack, a successful children’s writer who falls into fear and paranoia when he investigates grizzly Victorian murders and who must face his demons with a visit to the laundrette, the film nearly stumbles from the off with a protracted introduction to the lead character that simply goes on far too long and threatens to derail it before it gets going. Once the film leaves the confines of Jack's flat it significantly improves in pace and storyline, the comedy is richer and the characters more robust. Simon Pegg takes the lead role and gives a typically excellent performance; however with his name attached you do expect a certain type of film and while it tries to deliver on that, it never quite managers it. However, what you do get is a very well made film that is made up of complex and multi-layered characters whose foibles are explored and explained in a deliciously circular narrative. A difficult film to recommend, but one that I think deserves more recognition than it is currently receiving.

As a Region free Blu-ray disc Universal have provided a reasonable package, the picture is clearly reference, the sound is not far behind but the extras are bit thin on the ground – though the audio commentary is almost worth the price alone. I do hope it finds a place as home grown talent like this is few and far between and their effort should be rewarded.