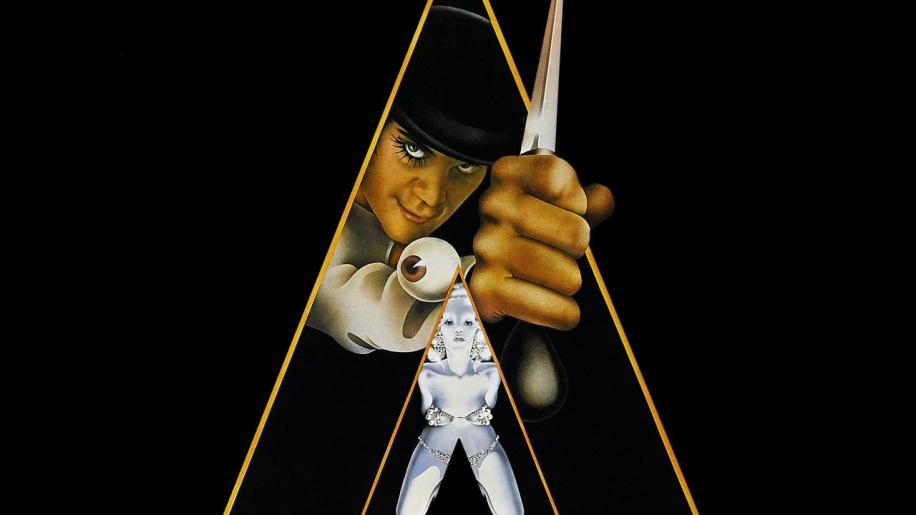 There was me, that is Keith, and my three remotes, that is PC, Amp and Projector, and we sat in the Empire Garage Convert trying to make up our rassoodocks what to do with the evening. The Empire Garage Convert sold popcorn-plus, popcorn plus butter or salt, which is what I was eating. This would sharpen me up and make me ready for a bit of the old ultra-viewing. And so up spins A Clockwork Orange, being some 26 years old I intened detailing a lot of the structure of the moive so I apologise up front as this review will contain spoilers.

In a dystopian future Alex (Malcolm McDowell) and his three fellow gang members, or Droogs, Dim (Warren Clark), Georgie (James Marcus) and Pete (Michael Tarn) sit getting drugged up before venturing out for a night of ultra-volence, pilage and rape. They succeed on all three counts. Stumbling across a silmilar droog gang they impart adequate amounts of violence before travelling further afield to exact the most diabolical rape, assault and robbery on the home of a middle aged writer and his wife.

Not content with the small pickings that the four have to share and becoming increasingly disillusioned with Alex's leadership qualities it is decided to rob a health farm, inhabited by its sole owner. Things go astray however and Alex kills the woman, on his exit his droggies, still embittered, assault Alex and leave him to the mercy of the approaching police. Alex is imprisoned for 14 years.

Inside he learns of a new technique which will 'cure' him of his desire to do wrong... The Ludovico Technique. Participants in this experimental technique are promised an end to their blighted life of crime and full release within two weeks. Alex signs up, not knowing what his ultimate fate would be.

This movie, perhaps more than any other Kubrick release, prodcued controversy the studios really could only have dreamed of. The only bad press is no press and A Clockwork Orange recieved bucketloads of the stuff days, months and years after it's initial release. Based on Anthony Burgess' book of the same name it follows the plotline closely but not fully. A cathartic work by Burgess perhaps freeing his soul of the memory of the rape and ultimate death of his wife some years prior. Contracted to write the screenplay it's inconcievable that he would have written something which glorifies such a heinous crime, those who feel that this is the case really do need to look deeper into this movie.

Along with the usual tight direction, framing and lighting from Kubrick we get a tremendous performance from McDowell himself. His previous If... and this defined his roles and character for a generation, never really freeing himself from these depictions for many a long while. Alex is a despicable character, loving violence for its own sake, the movie is narrated to us by him and gives us his point of view and so whilst he engages in acts of a truly diabolical nature which no viewer bar the most pathalogical could condone, Kubrick in his wisdom applies a score which turns these violent acts into ones of beauty or downright dark comedy. The battle with a rival gang set to Rossini's "Thieving Magpie" and appears almost ballet like on screen. The infamous beating and rape sung to the tune of "Singing in the Rain" actually allows the viewer to experience what Alex feels, the beauty and life afirming nature of the acts he is performing. Once seeing this from Alex's eyes and perhaps even laughing at these scenes the viewer starts to question their own opinion... why is it that they actually like or relate to this character?

Half way through Kubrick turns it on it's head. Alex, after going through the Ludovico Technique becomes the victim. Incapable of making defined choices for himself he becomes The Clockwork Orange of the title. Choice has been removed from him by an overtly violent and irresponsible social state wary of its own position, forced to imprison political prisoners who don't agree with the current political movement. The perpetrator now becomes victim, his previous victims (his parents, his droogs, the man whose wife he raped) all stumble into his path and extract their revenge in the most vicious of ways. Gone here is the flowing orchesteral score though, replaced with harsh, mindless electronic sounds. This violence obviously then is not to be thought of as acceptable and even though the revenge exacted upon Alex is never as great as the violence initially dealt out by him the viewer feels more pity, why?

Burgess and Kubrick in turn are asking if it is moral to extract revenge for it's own sake, they ask if it is correct for any civilised society to manipulate any person no matter how heinous their crimes for the sake of society as a whole. Shouldn't man after all be given the free will which has been his devine right since birth? Many will say aye and many nay, that's the beauty of this and other Kubrick films for me... the debate that can spring up around it. And what a debate it has been over the past 26 years. Initially derided by The National Viewers' and Listeners' Association, church groups and city councils to name a few A Clockwork Orange gained much more from this publicity than Kubrick himself could have hoped for. He always wanted reaction and he certainly recived it here. Ultimately though it went too far in the UK and time after time it was used as a so called weak defense when criminals were brought to court. After receiveing death threats against him and his family Kubrick himself removed the availabilty of A Clockwork Orange from the UK. Perhaps his vision had touched a raw nerve, perhaps it was simply foretelling the shape of things to come. This self impossed banning remained in effect until his death in March 1999.

The film's a wonder to behold though and another testiment to Kubrick himself. Perfect vision in the bleak abandoned estates, music you would never have thought applicable to a piece such as this, And, for me, it is that score which really does extract the essense of the story as a whole, the feelings our anti-hero is going through. Acting from McDowell a tour de force which has rarely been seen since. Excellent pacing and some of the darkest comedy scenes which will grace your screen. It's a demanding but highly worthwhile watch.