A Chump at Oxford Movie Review 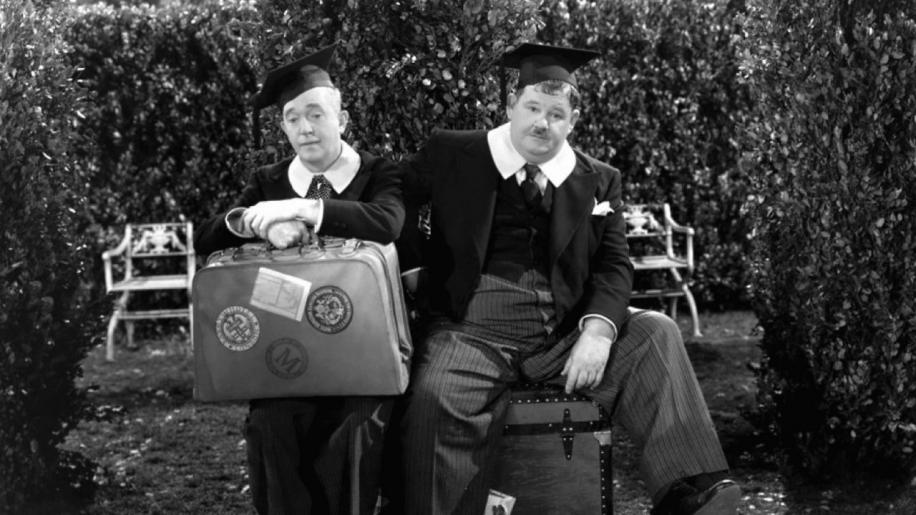 Yes, you did read that right... this Laurel and Hardy box set consists of 21 DVDs which means watching them will take some Four Thousand, One Hundred and Nineteen minutes - that's over 68 hours or almost three solid days of viewing pleasure. I guess I should come clean right here and now - I was sent a few pre release PR copies and my review here is based upon a relatively small sample when compared with the retail package, although watching ten movies in one sitting is still quite a feat... even for a DVD reviewing hack!

Any review of Laurel and Hardy would, I feel, be remiss if it didn't include ones feelings towards the comic duo - so here goes... When I was a kid I loved watching their movies, generally screened on the Beeb during school hols. There was something about the skinny guy when he had been pushed just too far by his plump friend; when this happened Stan Laurel's personality changed rather dramatically, gone was the baby-like simpleton character replaced with a determined and relentless foe. This was sometimes accompanied a strangely humorous poke in the eye! And that's it... my favourite Laurel and Hardy moment. That, for me, was comic genius pure and simple, and I was always sorely disappointed at how infrequently it seemed to happen. But I'm a little older now, and my time as a DVD reviewer has hardened me a little - it's no longer quite as easy for moviemakers to raise a smile from my more mature (or should that read more cynical?!) lips. Which brings me to the Laurel and Hardy box set; as would, no doubt, be expected - there are many, many laugh out loud moments to be enjoyed here. However, including very early silent movies such as With Love And Kisses and Should Married Men Go Home seems to strip away some of the fluid effortlessness with which L + H are so renowned. I was left with similar feelings watching “rehashed” movies - for instance 1929's Unaccustomed As We Are was later “remade” in 1938 as Blockheads. Watching both movies back to back kind of lowers some of the genius and at times I felt that Stan and Ollie were working at their craft... which, of course, they probably were!

But these movies are to be enjoyed and enjoy them I did. It has been said that genius is 1% inspiration and 99% perspiration, and all comedians sweat - even the very greatest.