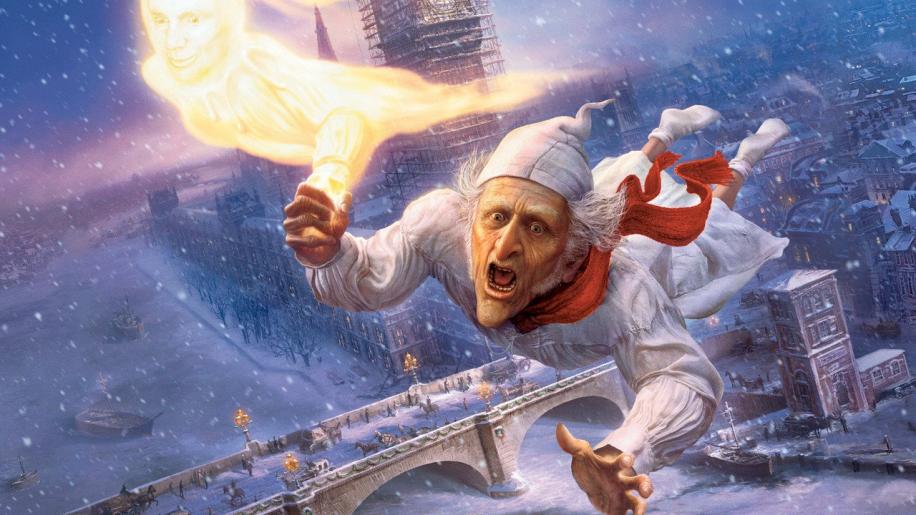 Surely there cannot be anyone that does not know the story of Ebenezer Scrooge? The wizened old miser who is given a chance at redemption when he is visited by four ghosts one fateful Christmas Eve. A story that has been popular since 1843 when it was first published, has never been out of print and has been adapted into plays, operas, TV shows and films as diverse as the Flintstones and the muppets. Surely everyone knows the story? But, I guess, with a story that is instantly identifiable, interpretations and re-interpretations to bring the story to a newer/younger audience are deemed profitable. So, in November 2009, Disney brought us a ‘faithful’ adaptation of the original book and in 3D no less.

Robert Zemeckis, who last worked for Disney on Who Framed Roger Rabbit, was brought on board and using his own screen play, the latest motion/performance capture techniques and 3D filming in the digital realm, has produced a body of work that is at once recognisable as Dickens’, but tinged with a sinister dark edge that many might not be expecting. Zemeckis is rapidly becoming the go to guy for motion captured computer generated flicks, this being the third he has helmed. And each time the technology has improved to this point where it is near photo-realistic. And it really is, take a look at the attention to detail in every frame, I do go into this in the picture section, but it’s worth mentioning here too just how good the artists have made their work, from skin defects to peeling paint! As to the characters, they are perfect replications of the actors body and facial movements, truly ‘performance capture’. Does beg the question why not just film it? Zemeckis, actually, answers this question in his commentary, saying that in the digital realm everything is possible, sizes of characters and perspectives can be altered to suit the director’s vision, for example Cratchit is rendered as four feet tall. Still, can’t the same thing be worked in real time with forced perspective? Anyway, ignore me, because A Christmas Carol is a magnificent looking film, easily the best looking of Zemeckis’ helmed computer generated movies.

Dickens’ novella has been interpreted too many times to count, and many cite Alastair Sim's Scrooge (1951) as the reference point against which all are measured, so how has Zemeckis (who states on this disc that this is his favourite novel about time travel) managed to differentiate his take from the crowd? The performance capture and computer generated animation are the first, and obvious, differences. But what to the tale itself? Well, Dickens’ original prose is pretty much perfect, and impossible to improve upon, the tale needs to hit certain points, the miser, the ghosts, the turnabout of the character; without these there is no story – so obviously Zemeckis keeps these elements in. In fact, Zemeckis sticks pretty much to the source novel and only deviates in a couple of instances, presumably to spice it up for the kids, when you look at the scenes, more on which later, leading to many cast and crew (even an Oxford Reader) to keep on saying just how faithful this adaptation is to the original work. He even lifts passages of dialogue direct from the page! Now this is no bad thing, as I said, Dickens’ work is so readily accessible that little or no work is actually needed to make it enjoyable to a modern audience; the characters are still as relevant today as when it was first written. We can all recognise the ‘Scrooge’ character traits in people we know. Festive cheer and family time at Christmas is gaining more momentum, despite this Government trying to tax the pubs out of existence. But what Zemeckis has done is to shorten the script, speed things up and race through the story at the expense of characterisation, it’s not quite to the films detriment, but a slightly slower pace may have made for a more enjoyable experience.

Jim Carey is the star of the show, playing the lead, Scrooge, in all his ages, and all the Ghosts. I’ve never really been a fan of Carey’s work, his mobile body and manic behaviour being just a little too much for my taste, although he is excellent in his more serious roles (Truman Show, Eternal Sunshine of the Spotless Mind). As the old Scrooge, Carey embodies a bitter and twisted old miser, exactly as written, with a hunched, scrawny body, witch-like face and hard grating voice he is the embodiment of every Scrooge we’ve seen before, sadly there is nothing new here. I’ve seen Carey do amazing work with pathos, but here when Scrooge is pleading with the Ghosts, or suffering at the plight of Tiny Tim, something is just lost in the translation, there is never quite that grip on the heart strings needed to fully realise the character – Sim still has it in my book. This may have something to do with the speed with which Zemeckis paces his film; Carey does manage to convey the miser aspect well, being particularly mean to all around him, but never so much as to be truly loathsome, which is a shame, but the transformation into happy festive cheer just seems too rushed. His joy at watching himself as a little boy at school, his heartache at watching himself push the woman he loves away and his anguish at his own death, all seem rushed to the point where nothing gives you that sense of impending change needed to fully justify the Ghosts work. Even the motives for his miserly behaviour are lost in one sentence, and this aspect could easily have been something used as a stepping stone to separate this interpretation from the rest. There is nothing overtly wrong, and if this was the only interpretation out there, then it would be the benchmark, but of course there are, and this performance does not stand out.

Where Zemeckis does excel is with the added horror, Marley is particularly terrifying, his slow walk up to Scrooge’s door done purely on sound, his sickening appearance and his exit to view all the other lost souls as they pay their penance, is particularly gruesome. Some spectacular 3D visuals during this sequence as well. So after scaring the willies out of the kids in the first quarter of the film, Zemeckis then gives them a thrilling ride, in a scene not in the book, and one, if I was cynical, added for the games consol/Disney World ride spin off, in the form of a chase sequence with the Ghost of Christmas Yet to Come’s horse drawn hearse culminating in Scrooge being shrunk to the size of a mouse! It is an odd scene and one that doesn’t quite sit right considering the rest of the film, however it does, once again, give rise to some spectacular 3D effects, take a look at the lights as they explode behind Scrooge as he begins to shrink.

The other characters are brought to life by some well known voices; Gary Oldman, Colin Firth and Bob Hoskins to name but three, but sadly none are given much in the way of screen time, and none really develop enough to give a fully rounded character that invites the empathy needed to pull you into their plight, this is particularly poor for the role of Oldman playing the Cratchit character, as it is his son’s, Tiny Tim, misfortune that finally swings the tide for Scrooge. Oldman does what he can but his anguish and defeat never really grab you by the heart as they should, again I point to the digital translation – but why this should be so is a mystery, look at any of the Pixar movies, they do not suffer at all with loss of empathy, if anything Wall-E is the most powerful actor of the lot, and he never says a word!

Having said all that, Zemeckis’ film does have a lot going for it, it wears Dickens’ message proudly on its sleeve, the animation is first rate, the stylistic choices suit the childlike wonder that was aimed for, it is neither taxing nor bogged down by over sentimentality, but gets on with telling the story in as efficient a way as possible; all the while showing off the 3D filming with as much foreground pointing as possible. Personally I’d like to have seen more depth to the picture, more distance, rather than masses of large foreground ‘reach out and touch’ images as these are always obvious and used to draw attention to the 3D; I feel it works much better when used far more subtly to draw you into the screen. There are plenty of these moments too, expanded upon in the picture section, I’d just like to have seen more. In all this is a terrific example of how to sell a story, in the best tradition of Disney.