A Boy and His Dog Movie Review 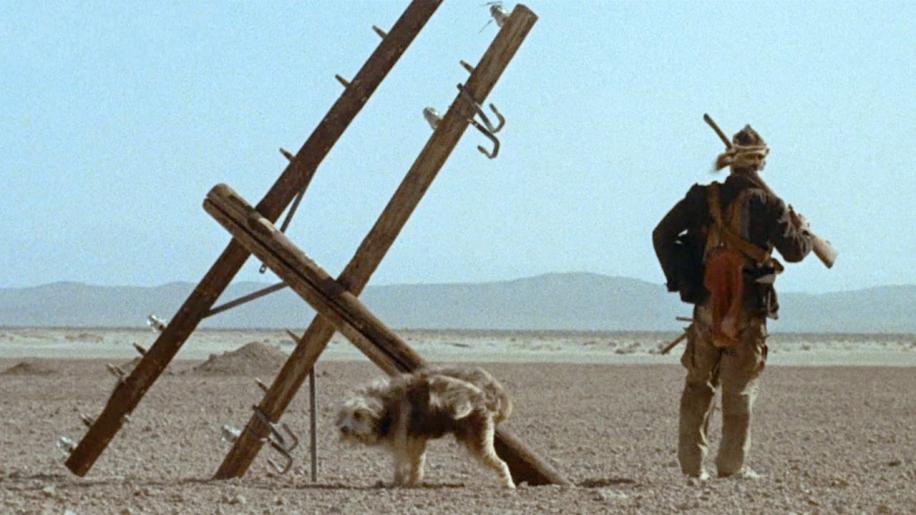 “One indication of a female alone and it's all caution to the wind ... the eyes glaze, the glands swell and the brain freezes.”

Into this vicious dog eat dog, primitive realm comes Vic, played by a young Don Johnson.(Isn't it disconcerting how little he seems to have changed from these early days to his current incarnation as Nash Bridges?) He is The Boy. Heavily armed, reckless and horny-as-hell he prowls the desolation in search of females that haven't been too badly cut up by the last band of rapists. To this end, though, he has something of an advantage. And that would be Blood - his telepathic dog, who acts as his companion and mentor. In return for the food that Vic supplies, Blood helps him find girls, so each depends upon the other in what amounts to a symbiotic relationship. Blood also educates Vic, cleverly turning the master and dumb animal routine on its head. He appears to know how the world came to be in such a terrible state, though little mileage is made from these tantalising snippets and his slightly drawled, almost world-weary voice - supplied by Tim (Rich Man, Poor Man) McIntire, who also donated some of the film's music, too - seems to goad, belittle and casually snipe at his human companion a lot of the time. But we know that, despite their constant bickering, the two are quite devoted.

“That's our boy. Put out the cheese.”

All this changes, appropriately enough, when Blood sniffs out a particular girl called Quilla June, played by Susanne Benton, who appears like a the serpent in their blighted Eden and completely turns Vic's head. Promising him the ideal life in an underground paradise composed of the remnants of a supposedly civilised society, Vic makes the decision to go and investigate, leaving his travelling partner, Blood, topside to lick his wounds after a nasty set-to with another bunch of renegades. The scene of Vic entering the incongruous pillar-box entrance to the new world beneath is a touching moment, indeed. This may be a barbaric world and our nominal hero may not amount to much more than a desperate rapist, himself, but director L.Q. Jones knows that we will always be hooked by big doggy eyes.

However, down below, all is not what it seems. For a kick-off, everybody walks around with mad smiles, some very disconcerting clown makeup and a mortal fear of being sent to the Farm. With a guest appearance by Jason Robards as the head of the sinister Committee running this quaint yet eerie, 50's styled subterranean township and a terrifying Westworld-like android enforcer called Michael, the movie slips a gear and morphs into a strange new melancholic mode that really gets under the skin. It is this highly stylised and creepy section, playing out like a mid-west American take on The Prisoner that makes A Boy And His Dog really stand out from the crowd of nihilistic 70's genre fare. Stand by for some unexpected violence and a neat bit of plot revelation amid the unsettling atmosphere. “I gotta get back in the dirt, so's I can feel clean!”

Based on the prolific Harlan Ellison's Nebula Award-winning novella of the same name, A Boy And His Dog is a witty, clever and unusual movie that intrigues and shocks in equal measure. Despite its almost cosy Disney-esque title, the world depicted is a stark, amoral and brutal one. The touching bond between Vic and Blood is built purely on savage needs and desires and all facets of the different societies portrayed depend on repression and manipulation. Yet, for all that bleakness and lack of heart, there is still an underlying poignancy to the image of a boy and his dog wandering in the wasteland. And then there's that shattering, yet ultimately poetic twist ending. But, if you are new to this movie ... then I'll say no more. A minor gem that is original and thought-provoking and, dare I say it in this day and age of wasted, needless remakes and re-imaginings, actually quite ripe for a possible upgrade. I mean Don Johnson could actually step quite comfortably back into the role!