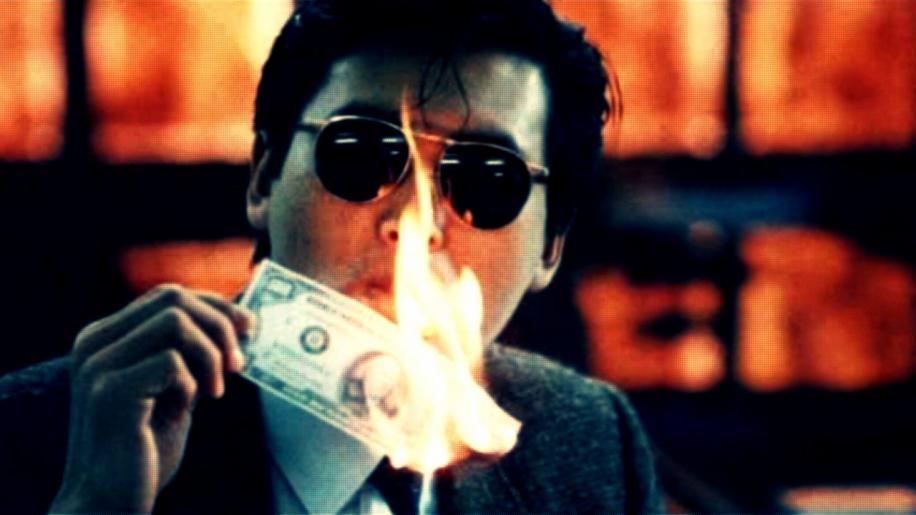 John Woo’s star may have plummeted from the heavens of cinema for fifteen or so years (I still don’t rate Face Off!) prior to his resurrected glory with Red Cliff, he languished in the doldrums of run-of-the-mill-Hollywood-thriller-land. It says something when a director can fall so far from grace, even going so far as making a much vaunted Hollywood debut with Jean-Claude Van Damme as his first big budget American production, yet still come out the other side with a loyal fanbase. Stinkers are one thing, but few rarely care for profound mediocrity, yet such was the power of Woo’s Hong Kong legacy he was forgiven: The Killer, Bullet in the Head, Hard Boiled and, most importantly, his 1986 heroic bloodshed epic that helped kick-start an entire genre, A Better Tomorrow.

An emerging talent would become the next big Hong Kong superstar, as 31 year old Chow Yun Fat, thanks to suave looks, charismatic interplay with fellow leads and some tight gunplay, would prove to be a figurehead of crime dramas in the region for the next decade. His role as Mark, a super-confident sharp young gangster, would strike a note with young male cinema-goers and thanks to many wishing to emulate his debonair style, sales of his trademark trenchcoat soared in Hong Kong, such was his impact. Chow’s role, though loved by fans, was not the lead - that honour went to a mainstay of martial arts cinema, and arguably a slightly odd choice, Ti Lung. Playing Ho, the elder of the pair (and Big Brother in crime terms) to Mark, it would be his plight that drove the film. Ho’s father is ill, his brother Kit is about to graduate into the Police force and he wants to makes this his last mission for his employers before quitting. That’s always ominous. He and Mark are the best at what they do, though that largely seems to be shaking hands and opening briefcases going by Woo’s opening montage, Ho is to take a young wannabe in the firm, Shing, with him in place of his ever-present partner-in-crime, to Taiwan to finalise a deal for his bosses who specialise in counterfeit currency. Even in 1986 it was hardly original to have a man’s last gambit in an unlawful profession going wrong, so it’s hardly surprising that once the pair arrive in Taiwan Woo cues the suspicious looks, rushes through any atmosphere to set the scene (what’s the point when we can all tell where things are headed) and heads straight towards guns breaking out and a double cross.

Ho ends up in prison, and unfortunately the ramifications of his actions don’t end there; a tragedy strikes his family, and it is one that Kit won’t easily forgive him for. Thus far there would have been little to indicate Woo to be a director known for his stylised action, but luckily just when things seem headed down a tense-but-pedestrian drama route Chow gets out his guns. The scene is almost timeless, you could argue there’s little originality about the manner in which it is shot (many Woo films can be viewed as a “spot the familiar shot” game), but it is no less engaging for it. Mark, in glorious slow motion, laughs with the lady on his arm; they are bumping from side to side in the hallway in a playful manner, but as he nears each wall he surreptitiously hides a gun in each potted plant. The door opens, those responsible for Ho’s imprisonment are unaware initially who it is that stands before them, and when they realise, it’s too late. Mark fires flurries of bullets into all the backstabbers’ gang in the room, whether they are armed or not. A whirlwind of hyper-sensationalised gunplay that involves sinking more rounds than are reasonably necessary into bodies; a veritable squib-parade that rains bloods and shells like confetti. Once out of bullets, the avenger throws his guns to the floor, still with several alive in the room, and makes his way calmly down the hall, only to retrieve the arms he stashed earlier and cut down any who make it out to face him, but not before taking a nasty couple of rounds to the leg. It’s over all too quickly, but it lets the audience know what is in store, what the director is capable of when the pressure cooker of tragedy has hit its peak and the lid needs to blow.

Woo is pretty hasty, not only in this instance, but in the general style of the introductions and segues that show character exegesis. The opening montage is a tool still used today but the aftermath of the botched Taiwan job is reminiscent of a time when filmmakers rushed through anything that involved time elapsing. Shots of Ho in prison, Kit firing at target ranges and within a minute three years have passed and the brothers are now ex-convict and police hotshot respectively. This is the meat of the story; for all the praise lavished upon the director’s ability to forge scintillating action sequences, his fascination appears to be tethered to human drama. Mark has been reduced to a dogsbody, his crippled leg keeping him from being the slick quick-on-the-draw ace gangster he was, and the firm has a new boss – Shing. The world of a few minutes ago is gone, a montage decrees it, and in its wake are the building blocks of Woos tragedy: Honour and betrayal, brotherhood (both familial and otherwise) and redemption.

Looked at through the eyes of today it is still clear why the gun-toting crime drama was, and still is, loved. If anything the intervening twenty five years have heightened the kitsch value thanks to some great eighties atmosphere. Joseph Koo’s score, and the theme “In The Sentimental Past”, has aged into a quintessentially iconic piece of film scoring that defines not only the tragic elements of the narrative but also the progression of the characters and storyline; as the synth kicks in things get more hectic and bullet casings will litter the ground. The fashion sense often makes Dallas look a picture of demure understated timeless elegance. Ti Lung wears shades that could double for welding goggles and his capture whilst wearing a white suit (having lost the matching white overcoat) might well have been by the fashion Police. Even Chow doesn’t escape the sartorial faux pas, with the wardrobe department placing him in the middle of an upmarket night club in a multi-coloured bobbly jumper one might posit his Gran had knitted him for Christmas.

All the montages, decidedly naff fashion and even Kit’s weak temper tantrums (he pushes books off a shelf and scrabbles at a corkboard of pictures like he was Mr Burns’ from The Simpsons weaker sibling) can’t derail the excitement fans still feel as the plot gains pace, ready to hit full steam and a final action sequence that hits like a locomotive. Yes you could argue it’s pure A-Team; bullets always clipping the ground around the protagonists whilst our heroes’ find their mark with unerring accuracy, stunt men leaping incredulously when hit, guns being waved like sparklers. Does any of that matter? Does it not still thrill when Mark, mouth agape and gurning in wide-eyed rage, lets loose enough shells in copiously excessive slo-mo glory to fill a bath tub? If the answer is yes, then you will never tire of this film, and neither will I.