"Forgiveness is a strange thing. It can sometimes be easier to forgive our enemies than our friends. It can be hardest of all to forgive people we love." 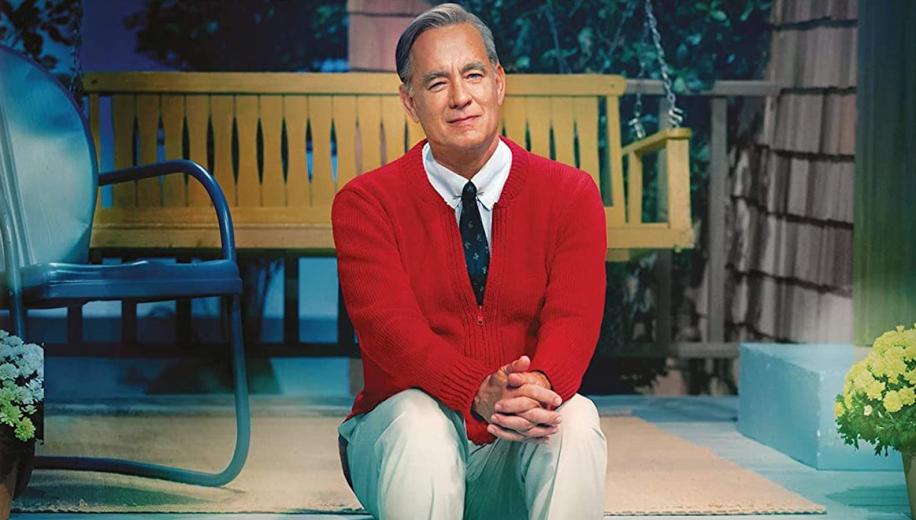 A Beautiful Day in the Neighbourhood Film Review

Hanks earns himself another Oscar Nomination, in a considered although hardly revealing role, for a thoughtful sideways biopic of American icon Fred Rogers.

There's something inherently lost in translation for those unaware of quite who Fred Rogers was; an American icon who arguably affected the nation much more profoundly than more internationally familiar celebrities like Oprah, guiding children - and, tangentially, both their families and in turn the entire nation - through a number of pivotal events in American history, from the assassination of JFK and the Vietnam War to the end of the Cold War all the way up to 9/11, incorporating surprisingly adult themes into an ostensible children's show, with thoughtful reflections on everything from bullying and body shaming to divorce and death. For those unfamiliar with Rogers, he largely represents an almost perfect depiction of 'the ultimate quintessentially wholesome Tom Hanks character you could imagine', and is an unsurprisingly a superb fit for an older Hanks.

A Beautiful Day in the Neighbourhood is actually only partly about Rogers himself, and perhaps even then more concerned with the impact of the man, both elusively observing him and cleverly exploring the impact of his work - which is, after all, his legacy. It's an interesting observational piece, refocussing the narrative on a damaged journalist and recent father whose relationship with his own estranged father leaves him the very last person you would want to interview the seemingly inscrutable legend that is Fred Rogers.

A thoughtful and philosophical biography

Hanks perfectly plays the character, and the character is perfect for Hanks to play, an interesting chicken-and-egg situation that does make you quite wonder whether it's really a performance which warrants an Oscar nomination (as has, since the 90s, been pretty much an annual event for the actor). Nonetheless, he's strangely compelling in the role, enacting a very particular cadence and measured way of speaking that those familiar with the real Fred Rogers would undoubtedly find uncanny. The 'recreation' of real interviews and use of real dialogue from Rogers' shows only adds to the authenticity, and there is veritable impact to his words, even if they often form an impenetrable fortress for any genuine emotion beneath. The guy is clearly revered as a living saint, and the feature doesn't even try to get beneath that veneer, going some way towards saying it was never a veneer - this was Rogers - but still leaving you short of any insight into what made this guy tick.

Conversely, overshadowed star Matthew Rhys (The Americans, and previously working with Hanks on The Post), gives an underrated performance as the troubled and deeply cynical journalist tasked with getting to the 'real' Rogers, with the film's most emotionally resonant moments opposite his estranged father, played superbly by the ever-reliable Chris Cooper (The Bourne Identity). This Is Us veteran, Susan Kelechi Watson, unfortunately is woefully miscast as the beleaguered wife, barely raising even a hint of chemistry opposite Rhys, and robbing much of the runtime of any impact (the opening scenes between them are amateurish enough to take your right out of the piece), but the trifecta of Hanks, Cooper and a career-high Rhys just about hold the piece together, dancing around one another in this offbeat, measured sideways study of the American legend which may not have quite the same impact on unfamiliar international audiences, but is still a thoughtful and philosophical biography.

A Beautiful Day in the Neighbourhood Blu-ray Video

A Beautiful Day in the Neighbourhood comes to the UK courtesy of Sony Pictures Home Entertainment, with a Blu-ray that likely marries up to their preceding US counterpart, but no sign of an equivalent to the US 4K disc, which perhaps furthers the notion that the US were really the target audience for this production. The disc presents a 1080p/AVC-encoded High Definition rendition of the movie in the original theatrical aspect ratio of widescreen 1.85:1 with in-show shots framed in 'fullscreen' 1.33:1.

We reviewed the UK Blu-ray release of A Beautiful Day in the Neighbourhood on an LG 55B7 Dolby Vision 4K Ultra HD OLED TV with a Panasonic DP-UB450 Dolby Vision HDR10+ 4K Ultra HD Blu-ray player.

Of course, the period setting, the faux-early-video-quality 'in show' footage and the model set footage are hardly elements which would be demo in 720p let alone HD Blu-ray or 4K UHD, but they keenly juxtapose the rest of the film, which looks largely stellar. Detail is excellent, facial expressions, lines, hair and textured clothing (and puppets) are wonderfully realised, whilst the period palette, reserved and dressed in muted tones, still looks rich and authentic nonetheless, with strong and solid black levels providing a deep backdrop with no over signs of digital anomalies. It's a very nice looking presentation.
﻿

A Beautiful Day in the Neighbourhood Blu-ray Audio

The audio track is surprisingly potent

Dialogue remains firmly prioritised throughout, of course, taking time to allow focus on Rogers' particularly distinctive voice and cadence. Effects are almost entirely atmospheric, but get decent coverage, whilst the score plays soulfully in the background, knowing when to leave the production alone, and when to offer quirky, suitably whimsical undertones.
﻿

A Beautiful Day in the Neighbourhood Blu-ray Extras

There are a fair few decent extras that adorn this Blu-ray release, headlined by an Audio Commentary from the Director as well as the DOP.

A few short Featurettes offer insight into the production and Hanks' unusual role, with a series of Deleted Scenes and a Blooper Reel, as well as a few Previews rounding out the disc.

A Beautiful Day in the Neighbourhood provides another solid starring vehicle for Hanks; a perfectly chosen role which Hanks embraces with both arms, enjoying the atypical manner and cadence but otherwise trademark Hanks "warm and wholesome" soul which epitomises US favourite Mr. Rogers.

Sony's UK Blu-ray release of A Beautiful Day in the Neighbourhood does a strong job with the material, providing largely excellent video and audio and a very good set of extras. Although we miss out on the US's 4K release, it's perhaps not the most obvious movie to warrant the upgrade anyway, particularly given the faux poor quality of the 'dated' in-movie show footage, leaving this a very nice release for UK fans to check out.