71: Into the Fire Movie Review 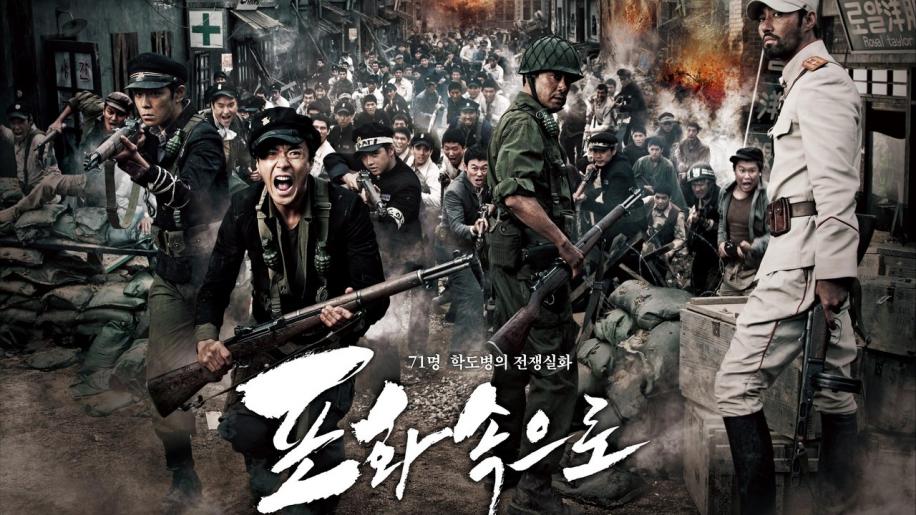 “On August 15th, 1945, Korea gets liberated. The South under US influences and the North under Soviet influences. June 25th, 1950, the North Korean People’s Army makes a surprise attack on the South. The North occupies Seoul in 3 days and the rest in 40, except for the area south of Nakdong River. Far outnumbered, many students joined the South Korean army as volunteer soldiers”. All too often a cursory history lesson at the beginning of a film feels either unnecessary (who’s watching a World War II film for instance and doesn’t know who the Allies were fighting against) or tips the hand of the narrative too early, guiding the viewer into the correct frame of mind, bypassing the spontaneity of the cinematic experience. In 71: Into The Fire it is needed, particularly for international audiences and younger cinema goers. The Korean war, in terms of silver screen outings, is very much the forgotten conflict – it lacked the ability to shake the American concept of imperialism-through-might that Vietnam brought crashing down upon a generation, and had little of the identifiable good versus evil leather-coated sadists that underpinned decades of World War II Nazi bashing antics. For the people of South Korea however, it remains a pivotal point in their history and what seemed the impending twilight of their freedom has left a justifiably lasting impression.

Director Lee Jae-han, still in the infancy of his directorial career with but half a dozen credits to his name, tackles this true story head on in a manner that belies his lack of all-out action credentials. Though his debut The Cut Runs Deep was a crime thriller of some intensity he has found his niche more in the poignant romance /drama end of the market. With the aid of cinematographer Choi Chan-min (himself similarly inexperienced), they combine to introduce the viewer into the action with some aplomb. Rather than a prologue, as the precursory text would indicate, the first we see of the young protagonist Oh Jang-beom (played by Choi Seung-hyun, better known in his native country for being part of the Korean boyband Big Bang and going by the alias T.O.P.) is amidst the chaos of battle. In a shock of sensory overload for both the character and the audience bullets fly past, explosions rock the screen disorienting all, once again uniting the watched and the watchers with both seemingly thrown in at the deep end. Oh Jang-beom struggles to gain his bearings as he carries ammunition to troops in need of it, an explosion crashes through this wall of noise and the youth looks on bemused, unable to hear due to his ruptured eardrums. It is close quarters combat in a small town setting, choreographed to extremely high standards. Lee has orchestrated a scenario whereby there is little tangible to hold onto beyond the spilling of blood - for these first few minutes the whirlwind of gunfire, ricochets, bullet holes in buildings, bodies falling and eruptions of shrapnel set the tone of fate having no bearing on death that so many Eastern films rely upon. It is chaos, unpredictable and almost inescapable. The only rock within this sea of bodies is that of the South Korean soldier Captain Kang (played by Kim Seung-woo), a veteran knowledgeable in the field of combat but not hardened against his natural human sensibilities like so many archetypal Eastwood-esque officers.

Once the battle sequence ends, Lee navigates us slowly into the back-story of Oh Jang-beom by mirroring his escape with the retreating troops - with bodies hurriedly piled into an army vehicle – with that of him leaving his family to enlist as a student soldier. Waved goodbyes of loved ones intermingle in his mind with the war torn devastation of the battlefield he is fleeing, both scenes of loss and sadness. The characterisation of the boy soldier is far from the standard tale of youthful exuberance butting up against the cold hard reality of war. Here the choice is made to depict him as a contemplative and quiet individual, as perhaps best epitomised by an encounter with a nurse tending to his wounds to whom he cannot speak. The calm beneath the waves of a mind coming to terms with the scale of the situation is well played by Choi Seung-hyun, lending the film a well placed pivot to what will become a largely young cast ensemble.

With the South Korean forces having retreated as far south as they can go, the key battle of Nakdong River takes priority and those in high command order all available troops to the battlefield, but maybe as a futile gesture they leave the location of Pohang to be defended by new recruits, namely a couple of trucks full of student volunteers, still in school uniform and having had no military training whatsoever. In this situation, with none of those arriving having any experience, Oh Jang-beom is put in charge – Captain Kang reasons that his experience is limited, but still far greater than anyone else’s there. The sum total of those left behind to stand their ground is 71, made up of 68 students and three delinquents on their way to juvenile reformatory on a charge of murder. It is at this point that the overall tone changes for a period, as the oft trotted out Dirty Dozen style power struggle and bravado shows of superiority come to the fore. Understandably the three ruffians refuse to take orders and with this Lee sows the, perhaps all too obvious, seeds of an unlikely partnership and tale of redemption. All swagger and talk, the three delinquents could have been Bash Street Kids caricatures but instead have an infused warmth, thanks to some well paced interplay that indicates a real bond. Lee doesn’t rush these scenes, allowing for silence and pauses, as with Oh Jang-beom, to come to the fore.

Once the sabre rattling of establishing the new cast of youngsters is over, the innocence of petty teenage squabbling is shattered by a brief but haphazard fire fight with a scouting party from the North’s army. It not only cements the hierarchy of the group but also the gravity of the situation, proving just how ill-equipped the boy soldiers are. Bloodshed is never shied away from, and in one messy and drawn out death scene the thread of a country torn apart and the universality of the pain of war is placed into the film to be spun thereafter.

Unfortunately clichés aren’t held at arm’s length for the duration, as the figure of a nemesis looms into view. Bedecked in war torn white uniform, slow in gait but deliberate in mannerisms, Commander Park Moo-rang - of the North Korean People’s Army - teeters back and forth on the precipice of hackneyed arch villain. Given more screen time the character could have blossomed (there are some nice touches hinting at a back-story) or fallen face first into full-blown pastiche. As it is, with such an ensemble cast of youngsters to establish, CommanderParki s afforded just enough screen time to impose himself as a suitably stylish threat, but not handed enough rope to hang himself with. He becomes a diversion, and an effective one at that, from the core story of the student soldiers.

That too has its problems – once the bullets start flying and the cast of doomed young combatants is whittled down the air of Battle Royale is hard to avoid as all the teenage archetypes are trotted out; we’ve had the tough delinquents and the strong silent leader, then there’s the geek (who must obviously wear glasses) who is instructed to work the radio, the coward who can’t fight and a particularly young lad who enlisted with his brother and, upon constantly talking about how good his mother’s soup was, may as well have “gonner” written on his head and a target on his chest. None of which is helped by the telegraphing of a likely tale of redemption by those who’ve shown less heart. The saving grace, even when it becomes all too familiar, is the masterful display put on when shooting commences. Whether minor sorties or full blooded battles, they are disjointed, nervy and often downright amateurish from the perspective of the students. It matters little whether the body count can be tallied on one hand or becomes a case of last man standing, the tense and confused pandemonium that underlies war permeates everything.

The cinematography is stunning, going from blooming battlefield heat to the warm glow of gentle reminiscences. Lee’s direction of this tumultuous rabble of bodies falling is finely orchestrated, the mix of shaky handheld footage and slow steadiness in the right ratio keeps a rhythm to even the most hectic scenes. Together these two core facets of cinematography and direction, when combined with a score than holds well to the firm ground of thoughtful and wistful melancholia, without becoming too bogged down in the swamp of maudlin schmaltz, makes for a tight and well crafted vision of chaos and the human toll of war. It may not be entirely original in many respects, but even if you were to categorize it in a slapdash fashion as Battle Royale meets Saving Private Ryan with a hint of Zulu for good measure, does that honestly sound like a bad thing? Evoking many great depictions of conflict and with enough heart and thoughtful sparks of creativity all of its own, 71: Into The Fire is a rousing and sometimes poignant experience that far exceeds expectations.