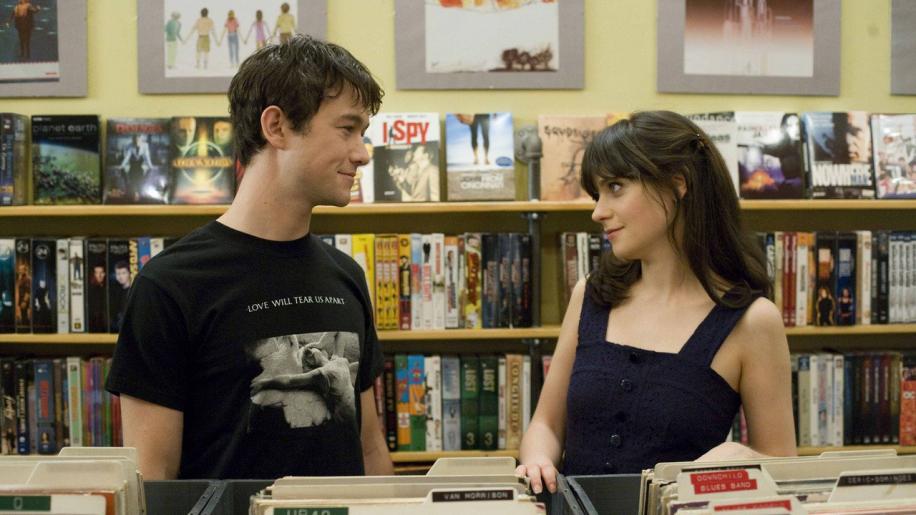 '(500) Days of Summer' was released this year and was directed by Marc Webb. This director is pretty much an unknown in the world of movies, having busied himself over the last couple of years making music videos (for the likes of 3 Doors Down and Jesse McCartney - two bands that look to be from the Busted category of "musicians") and this release marks his debut full feature presentation. I've heard good reports from a number of sources about this movie and despite the "smart, sexy and seriously funny" blurb on the front cover of the BD, which is usually enough to put me off these type of movies, I was very interested to see how this movie, with its fledging director and relatively inexperienced cast (in terms of feature productions), would fare. '(500) Days' has been nominated for two Golden Globes, one for Best Actor (Gordon-Levitt) and one for Best Motion Picture (musical or comedy), further reaffirming its position as a sleeper hit of 2009.

Like the director, the cast are also largely unknowns in the movie world, with the majority having cut their teeth in television and other low budget productions. Joseph Gordon Levitt (most famously known as Tommy from "3rd Rock from the Sun", and who more recently appeared in 'G.I Joe Rise of the Cobra') takes on the lead role, playing Tom Hansen. Zooey Deschanel ('The Happening'), a young up and coming actress, plays the second primary character, Summer Finn. Geoffrey Arend ('The Ringer') and Chloe Moretz ('Not Forgotten') are also on board, playing McKenzie and Rachel Hansen, respectively.

The movie follows a young greetings card writer named Tom, who is wandering through life alone. Things begin to change when his boss' new assistant, Summer, catches his eye and also captures his heart. McKenzie, Tom's goofy co-worker, let's slip (while under the influence) that Tom is interested in Summer and although initially annoyed at his friend's drunken ramblings, the two hit it off and Tom is secretly elated. Explaining vehemently that she is only after a casual relationship, Tom strives to keep a cool head as his heart turns somersaults each time Summer brightens his day. They have similar interests and tastes, are able to make each other laugh and share intimate secrets with each other; all in all a seemingly effortless relationship. Spending more time with Summer fills Tom to the point of bursting with the intoxicating aroma of amore and life seems so much better in so many ways. His mind clears and so does his soul, bringing forth new inspiration and passion for his greetings card day job and life improves in general. It's not long, however, before the perfect relationship begins to crumble and Tom's dream girl begins to drift away from his yearning grasp.

As the opening monologue rightly states this is a story of boy meets girl but it's not a love story. Well, this isn't strictly true, as it is a love story but one based on that old thorn of unrequited love, rather than some 'When Harry met Sally' scenario. The entire piece follows a visual timeline of said “500 days of Summer” and regularly flips back and forth between early on in the relationship and the latter stages of emotional decline, in a completely non linear fashion. I have personally always liked the inclusion of a visual barometer in movies and it also makes the incessant hopping back and forward in the timeline of events (in this movie) a lot more palatable, as one can see where the story is in relation to the sometimes complex manner in which the story unfolds. The visual timeline depicts an almost autumnal scene (well it has a tree in it!), which changes from overcast to sunny depending on the status of Tom/Summer's relationship; another clever addition. The plot will surprise those expecting a standard love story with a serious dose of reality, as one party slowly realises that although love has stuck them firmly between the eyes, it has not had the same resounding and life changing effect on the other party involved. The transition of Tom/Summer from friends to lovers is subtle and wholly believable, with classic “relationship” questions, such as “So, how many boyfriends have you had?” immediately forming a strong bond between the audience and the characters involved. Summer is not your average girl, in contrast to the more traditionally minded Tom (who gave up his dreams of becoming an architect to being home the dough). She marches to a different beat and is “free” on so many levels. What common folk perceive to be the correct manner in which to behave/act are completely disregarded by Summer as she transcends these boundaries to a plane of consciousness where she acts based on what she believes to be right for her, rather than simply reacting to make others feel better. She takes Tom along with her on this exploratory journey and while initially he appears to grasp the scale of their relationship, it's not long before he begins to wish for a more traditional boyfriend/girlfriend situation, resulting in a souring of their sweet romance. This is really good way of condensing the entire experience of viewing this movie up, it's both sweet and sour!

The acting from all involved, especially from Gordon-Levitt, is outstanding. He is able to convey a range of emotions, from elation to deepest despair, to perfection; emotions that we all have experienced in our lives at some stage or another. Deschenal is equally as impressive, playing the slightly aloof and undeniably attractive Summer. She breezes through the piece with a nonchalance that flies in the face of what is socially acceptable, a slave to her whims and feelings rather than the trappings of society. My only minor complaint is that her character is somewhat shallow and underdeveloped but this is what makes the plot work, I suppose. Both are also incredibly adept at acting as though they are under the influence and the drunken conversations that they have are incredibly believable. It's only the manner in which they sober up in a matter of seconds which shatters the façade of intoxication. At times I felt as though the two were perfectly cast but in some scenes they seem a little too “young” to truly be affected by their life experiences. The supporting cast are all strong and I was particularly impressed with young Chloe Moretz, who plays Tom's sage sister; a twelve year old who knows more about the ways of the woman and of relationships than her much older brother.

The central theme explores the concepts of love at first sight, finding your soul mate and the role that the ever changing path of destiny plays in all of the above. Webb challenges and deconstructs these concepts throughout, calling into question the old adages which so many romantics hold dear to their heart. Webb concludes that it's merely circumstance which brings two people, who just happen to be attracted to one another and who have common interests/beliefs, together. The end product dashes the hopes, dreams and aspirations of young love on so many levels but, in a highly contradictory manner, also leaves the door slightly ajar for the real romantics in the world; indicating that if romance is not meant to be then it will eventually collapse, reaffirming the grip which destiny has on all our lives. Although the story conveys the horrors of a broken heart in an incredibly down to earth manner, it also exposes the overall irrelevance of a heartbreaking relationship collapse; a fact that many can take solace in and the conclusion is what I would class as a “happy ending”, providing a ray of light at the end of the dark tunnel of failed romance. However, the movie, like its soundtrack, can sometimes feel a little too contemporary, as though it's trying too hard to be “cool” and “down with the young kids”; but there are only a few fleeting moments which evoke this response and as the movie progresses this becomes a minor niggle. I also felt as though the Morgan Freeman style voiceover seemed a little contrived and gimmicky at times but on the whole it works, albeit not to nearly the same degree as 'The Shawshank Redemption' or other superior movies.

To sum up, this is a very simple concept, which has been given a novel and interesting twist (with regards to its presentation). It's seems that “carpe diem” is the order of the day here and this is the primary message that director Webb strives to convey. In this reviewer's humble opinion, Webb has done a stellar job with his first feature production and he's definitely one up and coming director to keep your eye on. He has managed, with unique artistic vision (via the use of split screens/rotoscoping, as well as other visual touches) and clever use of characterisation, to keep the entire piece feeling fresh, fluid and interesting. There are also plenty of genuinely funny moments throughout, thanks to a well constructed and witty script. Sure there are more than a few whiffs of his previous experiences making music videos and there is a touch of the “Ally McBeals” with some of the segments but overall the numerous pop culture references and parodies of older movies (such as 'The Seventh Seal') are handled with aplomb and work well. What really shines through is the fresh and intelligent manner in which the tale of Tom and Summer is conveyed to the audience and this is what makes this movie stand out from others in the genre. Indie to the core, offbeat, charming and engaging, '(500) Days of Summer' is the best rom-com (I don't particularly like this term but it's the term that best describes this movie) of 2009 and comes recommended to all.

"This is a story of boy meets girl. But you should know up front, this is not a love story."