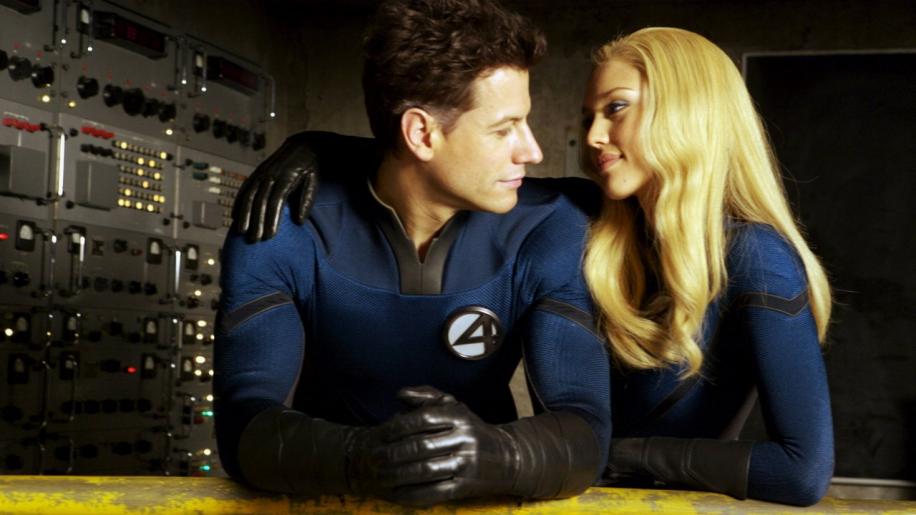 Ah, the inevitable comic book superhero blockbuster sequel. With an inconceivable amount of adaptations out there already, it seems strange that every single one of them will garner a sequel, and yet that is the case. It is all about the money. Whether it's great (Batman Begins), good (Spiderman) or just average (The Punisher), the studios will - sooner or later - come back to this cow to get more milk. And fans fall for it, because even with the average titles, the audiences hope that the sequel will develop the characters and make a better effort. Arguably, sequels to first movies that are actually good are a more hit-or-miss bet for viewers - Spiderman 3 provided two villains too many, X3 was an insult to its two predecessors and Blade Trinity drove a stake into the heart of Wesley Snipes' career. At least with a lacklustre first outing, the sequel can't be any worse. Or can it? The first Fantastic Four adventure was one of the shallowest comic book superhero adaptations out there, and aside from being evidence that our CGI technology was sufficient to finally bring these rather unique entities to life (an elastic guy, a human flame and a man made of rock), it was a mish-mash of poorly-developed characters and ill-conceived action set-pieces (that appeared to largely consist of the Fantastic Four saving people who they themselves had put in danger in the first place). The acting was limited, the villain was one-dimensional and the movie was over before it went anywhere, offering some very limited popcorn entertainment. It was the kind of film you could predict from start to finish just through watching the trailer (although, admittedly, trailers these days do give away far too much). So when I saw the trailer to the sequel, The Rise of the Silver Surfer, I expected it to be just more of the same. Finally, on Blu-ray, I get to find out whether it was indeed just another uninspired adaptation, or whether the writers have decided to build on the characters that they have already established and develop a decent story.

If you didn't see the first movie then I recommend you at least watch the trailer for it to give you an idea how these characters came into existence. As implausible as it may seem (and it is one of Stan Lee's most ludicrous superhero origins - even by the standards of the guy who decided massive exposure to gamma radiation would turn you big and green and angry and not just rot you from the inside-out until you die, painfully) the Fantastic Four came about after their spaceship was hit by a cosmic storm. That's right, four (well, arguably five, since Dr. Doom got hit as well) scientists all hit with the same cosmic rays react in disparate ways - the leader Dr. Reed Richards turns all elastic, his girlfriend Sue Storm turns invisible, her brother Johnny Storm turns into a ball of fire and the heavyweight Ben Richards turns into a mound of rock (oddly, they try and actually explain why he's rock because he had more direct contact with the rays - but they don't bother explaining why the others are so different anyway). The fifth scientist, Victor von Doom decides (somewhat predictably, given his name) to go the evil root and ends up turning against all the others, leading to the inevitable, and fairly anticlimactic, end of level baddie fight. It's little more than a TV movie, only elevated in terms of special effects, and were it not for the huge comic book fan-base that have been following the characters for decades, and the stupid amount of money it recovered at the Box Office (I assume parents were duped into taking their kids to see this child-friendly affair repeatedly) it would have never even been considered for a sequel.

Rise of the Silver Surfer picks up with Reed finally tying the knot with long-time love Sue. Or at least trying to. Unfortunately things get disrupted by strange occurrences across the globe, oceans and deserts freezing over, blackouts across Manhattan and even an attack on our very own London Eye (no great loss). After a couple of disastrous confrontations with the source of these phenomenon - a shiny 'silver surfer' - the Four are faced with the unenviable prospect of joining forces with the last person they ever wanted to see again: Dr Doom. Having survived their previous encounter, and after already trying to confront the Silver Surfer himself, Dr Doom appears to have gone good, for the sake of saving the planet. But is he really working with the team or secretly plotting against them? And is the Silver Surfer really trying to destroy the planet, or is there a higher power behind this?

Rise of the Silver Surfer is a marked improvement over the original Fantastic Four movie, which is understandable when you consider that the characters are already established and so they can spend more time getting on with the story. Wedding frivolities aside, and after a few witty exchanges between the always entertaining Thing/Torch combo-team we kick straight into the main story arc, which has been brooding ever since the opening credits. Ok, so there's nothing deep and significant, and fans of the comic characters will be appalled by what they've done to them here, but the tale is enough to hold together a ninety minute rollercoaster ride of special effects set-pieces, which is exactly what this is. And with more direction than the first instalment - which took so long to set things up, it had no time left to let anything play out - they can get on with providing audiences with a good old colourful kids comic-book affair. Right from the outset its effects galore, both on a planetary scale and with the localised rampages of the The Surfer, and (aside from a couple of odd dancing scenes where Reed Richards stretches unconvincingly) the effects are practically seamless. It really has never looked this good, and here we have the added shiny character of the Surfer to play with, which allows for some novel set-pieces.

Casting is generally good all-round, and it's not like you need Pacino for a movie like this. I'm still not convinced by Ioan 'King Arthur' Gruffudd as Reed 'Mr Fantastic' Richards, either as leader of the team or as Sue 'Invisible Woman' Storm's - Jessica Alba's - but you can largely ignore both him and the pretty-but-wooden Jessica 'Dark Angel' Alba and still have plenty of entertainment from the rest of the cast. You may not see it fully from their respective characters of the Thing or the Human Torch, but Chris Evans proved his mettle in the excellent and dark sci-fi disaster movie Sunshine and Michael Chiklis is the core of the superior cop drama, The Shield, so you can easily see why they are two of the most engaging actors in the movie. Their squabbling/camaraderie is much more interesting than the cheesy, predictable love story between Reed and Sue.

We also get a fairly reserved Laurence 'Morpheus' Fishburne voicing the shiny Surfer-dude, whose interesting character could have been given so much more depth, were this more than just a shallow Fantastic Four outing. And Julian 'Nip/Tuck' McMahon is similarly held back by his villainous character of Dr Doom, a mere shadow of the character from the original comics. Still, you don't come here for acting, or scripting (which is occasionally quite amusing), nor even for story or character depth. This movie is all about effects, and on that level it works amazingly. For ninety minutes you can sit back, switch your brain firmly to the 'off' setting and munch popcorn whilst planets are destroyed, landmarks (even British) are devastated and CGI-enhanced super-heroes engage in mega-battles with CGI-enhanced super-villains. Whilst it does not fully realise the potential of these comic-book characters, it does take them on a more fun, interesting adventure than with their original 'origins' outing. It may not be Sin City or Batman Begins but as good-natured, feel-good family-orientated comic-book extravaganzas go, you could do a lot worse than Rise of the Silver Surfer.