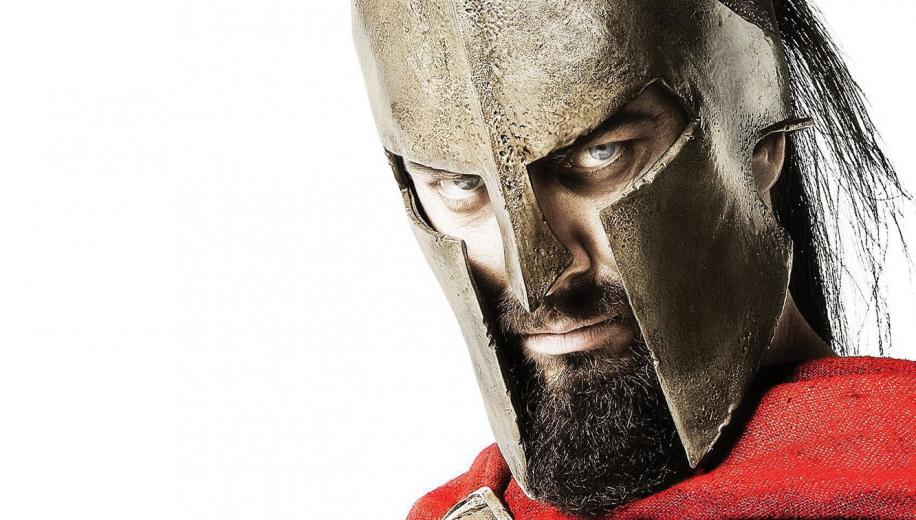 More about action than acting, visual imagery than character development, 300 is a single massive military set-piece, given a huge budget, plenty of slo-mo and one-liners and padded out to suitable Blockbuster runtime, eschewing all sense of depth or gravitas in favour of pure guts and glory. The movie loses all historical or cultural significance pertaining to the real Spartans, their advances within even the advanced Greek culture (democracy; women had equal voices), or the impact that their sacrifice would have on not only Greece but the world, and instead throws us straight into one stylish, epic setpiece for a purely visceral ride.

That said, it's still undeniably entertaining, a whole lot of bloody good fun. Vacuous fun, but fun nonetheless. It's Gladiator or Braveheart done in a music video style, Tears of the Sun, Lone Survivor or Black Hawk Down set in 480BC - a bunch of hard-ass, ripped soldiers blistering with testosterone and machismo, putting up a last stand against a massively overwhelming force. And doing so with the help of superior training, unyielding courage and the technological advances of CGI at their disposal.

It is the ultimate rock-track-laden swords-and-sandals actioner, peppered almost with no end of limb-lopping, hack-and-slash setpieces and even a little decent Spartan phalanx shield-push-attack tactical action. It looks stunning, the CG scenery breathtaking, the action relentless, remaining visually captivating throughout, and making the end result a boisterous, loud and violent period-set war action vehicle.

It may not have much substance at all; it may not give the 300 Spartans the legacy they truly deserve, nor help the average viewer to be any more informed about the historical significance of their sacrifice, the impact it had on uniting Greece, and the resultant unification that defeated the Persians and arguably brought about modern civilisation as we know it, but it almost makes up for its rampant shortcomings with lashings of over-the-top slo-mo style, and visceral entertainment, and the end result is pretty damn enjoyable.

300 makes its 4K bow in the UK courtesy of Warner Bros, affording a suitably impressive Ultra HD Blu-ray release that makes the most of its heavy stylisation to overcome any technical limitations of an ostensible 2K upscale and look pretty damn good on the format, and certainly the best that it has ever looked.

Certainly the best it has ever looked

300 was originally released some 13 years ago on Blu-ray, with the more recent 'Complete Experience" still boasting that same ancient VC-1-encoded presentation, although, for its time, it was hardly a train wreck, actually doing a solid job with the highly stylised material and blisteringly over-saturated palette, and remaining largely true to the original director's intent - at least insofar as Snyder was trying to make Miller's comic basically come to life, complete with the colour palette therein - so long as you were also prepared to accept it also being a showcase for noise, crush, banding and just about everything else you don't want from a release.

13 years later and this new 4K presentation absolutely - and unsurprisingly - blows it out of the water, seemingly doubling down on the grain (it's Snyder, so what do you expect?) but also enhancing just about every possible aspect of the original visual elements, whilst retaining than extremely distinctive comic-book-brought-to-life look. The almost painted CG backdrops, the perpetual dominance of golden sepia tones, the rich, almost luxurious red trappings and bronzed armour defining the 300 themselves - it all looks utterly gorgeous, sumptuous here, finally freed from the forgivable but still obvious defects of the ages-old Blu-ray, with no noticeable crush or banding anymore, just deep, inky, limitless blacks and perfectly rendered imagery throughout.

The HDR and WCG make all the difference here, particularly with such visually opulent work, lapping up the stylisation and delivering it precisely as it was intended - yes you'll have to get used to that faux grain, yes the near-monochromatic palette - alternating sepia and sheer monochrome for day and night - is very particular, but if you've read Miller's original work, this is pretty-much pulled straight from the page, and looks all the more gorgeous for it. Distinctive, sure, and hard to appraise as any kind of conventional demo work, it nevertheless revels in the newly found depth of tones (those red highlights really have a luscious richness to them) and casts them all against impenetrably solid blacks, rendering a lovely, faithful new 4K video presentation.

300 has already enjoyed the high ranks of boasting one of the most impressive early soundtracks on the Blu-ray format, with the original 13-year-old disc boasting two almost identically outstanding audio tracks - a Dolby TrueHD 5.1 mix (which made it to the later Complete Experience release) and a LPCM 5.1 track (which didn't). Nonetheless, despite these demo tracks, this new Atmos mix somehow finds room to upgrade the experience, delivering a tremendous 3D object-based immersive audio track that wields the same innate core power but expands out the soundscape to provide for a more engulfing ride.

Dialogue is given priority, clearly resonating across the frontal array and rumbling with intensity as Butler's Leonidas spit-shouts his endlessly quotable soundbites, whilst effects enjoy the footfall of a marching army, the thunder of the legions they face in opposition, the inclement weather and thunderous din of the epic battle setpieces, all expanded out across the array with some noticeably discrete elements and just oodles of palpable atmosphere, and cast against the booming, LFE-heavy score of Tyler Bates (doing his best impression of go-to-copycat James Horner by himself ripping off the score from Anthony Hopkins' Titus). It's utter reference decadence.
﻿

Warner are a little lazy on the extras front, only porting over the Commentary to the 4K disc itself, and not even bothering to include the more recent Complete Experience Blu-ray as the second disc in the package, instead churning out that same, ancient 2007 disc for the accompanying Blu-ray.

If you have the Complete Experience Blu-ray, it's that disc which you'll be popping in the second slot here

Nonetheless, there's a decent enough selection here, from that aforementioned Audio Commentary to a slew of five Featurettes and a further salvo of Webepisodes, with the disc rounded of by some Deleted Scenes. If you have the Complete Experience Blu-ray, however, it's that disc which you'll be popping in the second slot here, as its "Complete Experience" function was - and is - one of the better full-experience extra features that the format has ever boasted (and that 4K has yet to embrace).

Zack Snyder's 300 is the epitome of style over substance, entirely eschewing the bigger picture impact of this seminal tale in Greek history in favour of the best Ancient Times 'Battle of the Alamo' actioner you could possibly imagine, at least from an audiovisual experience point-of-view. It's mileage will really depend on how much you're prepared to just sit back and enjoy the utterly ripped-from-the-comic-book ride, as it may be pretty resoundingly vacuous but it's also a fair bit of bloody good fun.

Warner's 4K Ultra HD Blu-ray release of 300 delivers the goods with an impressive upgrade on both the video and audio front - that Atmos track is superb - even if they drop the ball a little on the extras by not only failing to provide anything new, but also not even bothering to include the most recently released "Complete Experience" Blu-ray Disc which came with that same, excellent extra. Nonetheless, fans should consider this a healthy upgrade, and they can always just pop in their Complete Experience discs in the second slot.