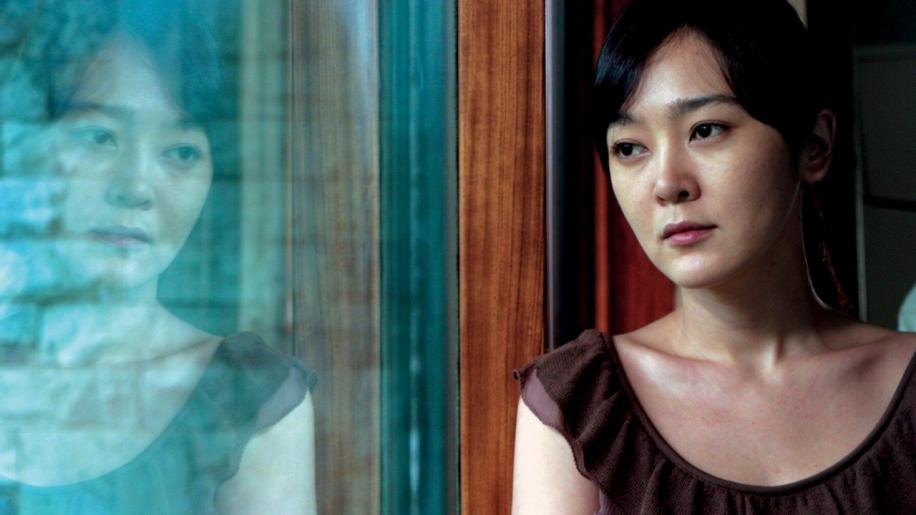 3-Iron is a love story, plain and simple. The title is derived from a golf club, which sounds odd, but makes sense when you know the story - luckily it's not a movie about golf.

Tae-suk (Jae) is (apparently) a homeless guy - even though he has a rather nice BMW motorcycle - he breaks into homes (utilising flyers in a cunning way), eats, sleeps, tidies up and is soon on his way to the next home. He breaks into one house, which isn't empty - Sun-hwa (Lee) is still there, battered and bruised from a very abusive husband (Kwon). Tae-suk leaves, when he discovers he is not alone, but it nags at his conscience that someone would abuse their wife in this manner, so he returns and watches the husband interact with the wife. He watches as she is slapped violently again and starts to hit golf balls, using the 3-Iron, at the husbands' target practice in their garden. The husband hears this and confronts Tae-suk, which is to his undoing as he is struck 4 times by golf balls being hit directly at him. Sun-hwa chooses then to leave with Tae-suk and they continue the habit of breaking in and living for a few days, while a romance blossoms during this time. However, all isn't as easy as it appears and eventually they get caught, victims of circumstance - how will this love affair continue with Tae-suk behind bars?Well, this is a bit different from the norm. The two main characters, Tae-Suk and Sun-hwa have almost no dialogue - Sun-hwa says about 4 or 5 words in total (right at the end). That's not saying it's totally devoid of dialogue - all the other characters speak, although it's very much not the focus here. This is a really interesting movie, to watch and understand characters who say nothing - it's all done with body language and eye contact - yet speak volumes. It is however quite a moving, powerful tale, written and directed by Ki-Duk Kim (Bad Guy) and as such, it's quite stylish to look at, yet very intriguing due to your having to keep watching to understand or hope to understand the dynamic (obviously due to lack of dialogue). I guess you have to say the actors do an amazing job of being able to convey the storyline with no verbal communication between them, for example, when Sun-hwa begins to demonstrate love for Tae-Suk, they are sitting down drinking tea and you notice at the very bottom of the picture her foot moving slowly until it touches his. It's not necessarily new or anything, but it's just nicely done in a sweet kind of manner.

The movie isn't particularly long at 90 minutes, but it does demand your attention - as I said, it's dialogue-lite. However if you want to see a romantic movie that isn't anything like Hollywood's heavy handed, clichéd attempts, not to mention a movie that doesn't have too many contemporary imitators, this is well worth picking up, it's a very unusual yet deftly handled love story.