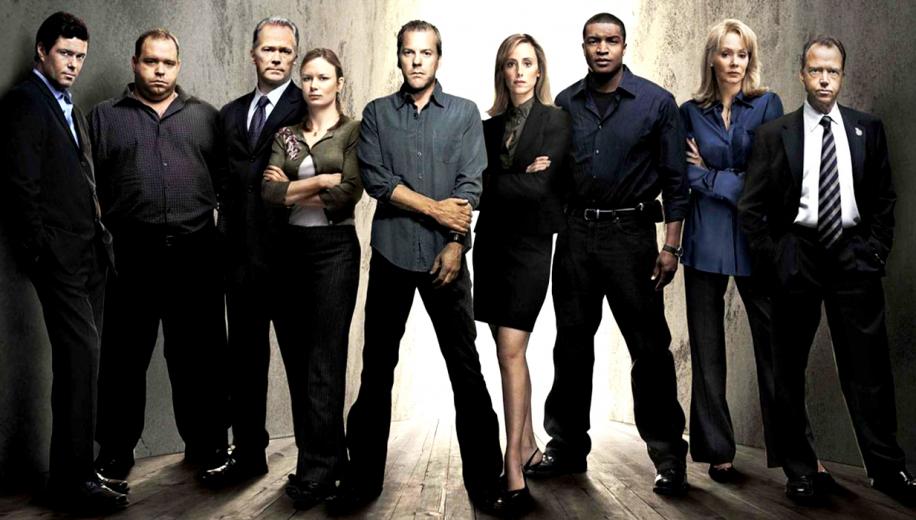 Each episode is given a broadcast correct 1.78:1 aspect anamorphically enhanced for widescreen TV's with an average bitrate of 6.90 Mbps, quite honesty it has never looked better. Colours are natural, bold and striking, even in the many dark areas and blue hues of the CTU headquarters. Brightness and contrast are set to give natural deep blacks, of which there are many, though tending towards the brown when the hue of the picture, such as artificial street lamps, demands it. The detail level is frustratingly difficult to define, especially in the CTU headquarters, the style of camera work is forever fluctuating, zooming shooting over and through objects, making edges hazy and sharp. Although external shots and smoke, rain and mist are all excellently reproduced, the detail never losing an edge even in the distance, even when zoomed in. Quite outstanding. There was never any hint of original print damage, neither were there any digital compression problems, though I did spot a little edge haloing on occasion. Film grain was also evident in places. For a TV show this was some of the best authoring I've seen, but I did still feel I was watching a TV program, it didn't have that sheen associated with top notch film transfers. The English Dolby Digital 5.1 track used the benefit of the six channels, though not to their fullest extent. For the most part the front three carried the show, the rears, though, when they came into play really opened up stage. Normally used to fill the score, or the 'ticking clock' or more especially the gun fights, this is where we have some real dynamic steering. The range was also consistently good, the bass coming in heavy to really fill out the score and the 'ticking clock' that signals an ad break. Dialogue was always from the centre, always clear and never drowned out by the mayhem that often erupts on screen. However, I felt that the rears were slightly under used, for example in the CTU headquarters there is a perfect opportunity to fill the room with plenty of ambiance, but sadly this was not the case. What we do get, however, was some thumping good LFE's, enough to wake my kids at one point, excellent stuff. In all, a very decent track, not as fully immersive as some, but certainly as engaging. Each disc has a number of deleted scenes attached to the hour they were from, though the extras disc has all thirty nine scenes with an optional commentary by Jon Cassar, though sadly there was no play all function. Scenes were generally removed due to timing, and though some did expand on ideas in their individual episode, without exception were deemed unnecessary and it is easy to see why. Scenes can run for a few seconds, to several minutes. As part of these scenes there is, for the first time for the US DVD's, a chance to see the director's cut of the season four prequel. This runs at six minutes, and only briefly adds to what has already been seen.

The season five prequel is an eleven minute sequence that has Jack and Chloe meet where she expresses her apprehension that his faked death has been leaked and he has to disappear, only to lead straight into a car chase. Filmed in what looks like HiDef digital it has all the hallmarks of a 24 scene, fast, furious and unexplained. It sets out its objective in wanting you to see more. As part of this film there is a Fox Movie special on how it was produced, all rather promotion than information though.

The Breaking ground: Building the new CTU featurette has the new production designer take us through his new design for CTU, which includes such delights as concrete, not metal steps to improve sound, and bar coded stripes on the windows, to look cool and enable the shooting through that is used in the show. There is plenty of information given in this short, even if the designer himself comes off as a bit of a geek, but who am I to judge?

The Blood on the Tracks featurette details the extensive amount of time, man power and effects needed to produce the train wreck that starts off season four. There were three directors working at the same time in the same area to produce three different scenes all necessary to produce the finished product. What comes across is the amount of work, timing and precision needed to pull of such an amazing looking stunt, have it believable and then add to that realism by filling the aftermath with such detail. Plenty of behind the scenes action as well as interviews with the major crew.

The Lock and Load featurette details the storming of the terrorist underground bunker to rescue the Secretary of State; the fact that real marines were used, both in shot and as technical advisors. They advised on everything, from tactics to weapons, it was up to the prop masters to equip the extras properly. Again, plenty of interviews with crew and many of the marines too, held together with behind the scenes footage and finished product.

A terrific little feature, previously only available to mobile phone uses in Europe is the 24: Conspiracy. A series of one minute episodes designed to be watched on a mobile phone as an advert for the series proper. Looks remarkable good considering it was meant to be seen on a 2 cm square screen. Not surprisingly the story features plenty of mobile phone use, and concentrates its story to a simple plot devise, but nevertheless is an entertaining watch with a handy play all button.

There is an introduction to 24:The Game by Jack himself, as well as a DVD-Rom link to a demo version of the same.

Finally there is the Longest Day music video. Day four of 24 is without doubt the best yet. It is thrilling, engaging, edge of the seat TV that insists you watch more. Jack Bauer has never been at his most destructive and all his havoc cost him dearly. As a DVD set, Fox have provided excellent picture and sound, with just enough extras to keep everyone happy. This series is a must buy for fans, and such is its 'new' formula and evolution, first time buyers will also get plenty from it.