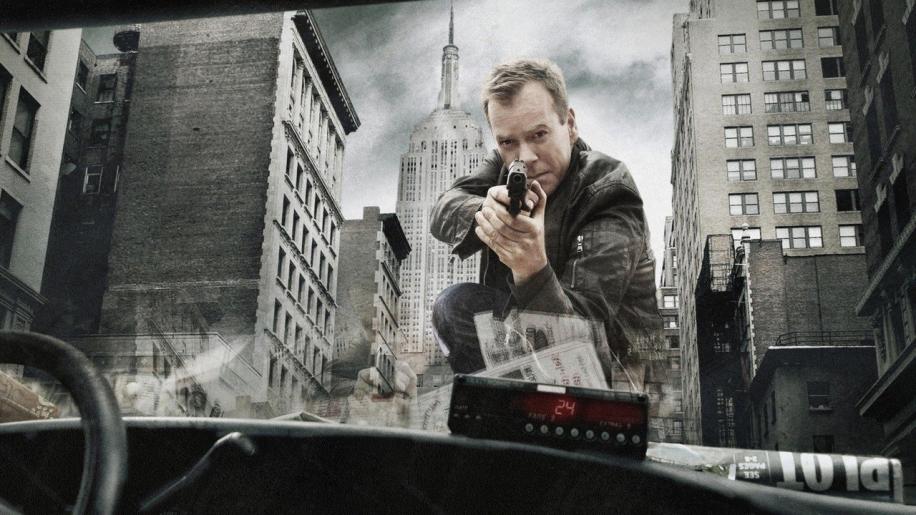 There's nothing better than getting an
entire season of a TV show on DVD.
No more trying to remember to watch/tape
an episode every week and no more long
waits between episodes. And no series
benefits from this more than 24, the highconcept
real-time action/intrigue series
from 20th Century Fox.
Set three years after the events of
Season Two, 24: Season Three kicks off
at 1.00pm with a dead body being
deposited outside the LA Health Unit, and
after careful examination it's discovered
that the body was infected with a deadly
virus. While this is going on, Special Agent
Jack Bauer (Kiefer Sutherland) and his
new partner Chase Edmunds (James
Badge Dale) are at a high security
prison visiting Ramon Salazar
(Joaquim de Almeida), a drug lord
Jack recently brought to justice after
working undercover inside their
operation. During questioning,
Salazar issues a mysterious warning
at Jack before killing his lawyer.
It isn't long before Tony
Almeida (Carlos Bernard), who
now heads up the LA division of
CTU, and the rest of his team
discover that the infected body is
all part of a blackmail tactic to
release Salazar. To make matters
even more complicated, the threat comes
on the same day that a running-for-reelection
President David Palmer (Dennis
Haysbert) is in LA for a debate, Jack has a
secret heroin addiction after his time
undercover, and his daughter Kim (Elisha
Cuthbert), who now works at CTU, is
secretly dating Chase.
Whew! And that's just the events of the
first hour. We're not going to say
anything else about the plot of
Season Three because, as follows
of the previous runs will know, this
is a series that thrives on its
unpredictable nature. What we
will say is that if, like us, you
don't have access to Sky One
and have been missing out
on following this series as it
has been broadcast in the
UK, don't pay any
attention to those who
claim that the third season
is something of a letdown.
Having watched the entire
run now, we can safely say that this year hits the ground running and the
last half of the series rivals anything 24
has ever given audiences before.
Even more impressive is the way this
season builds upon what occurred in the
previous years. While Season Two
floundered slightly in trying to give the
drama a wider scope and create personal
drama for all of the characters, the writers
have realised that the same effect is
possible and more manageable by having
the characters battle against their inner
demons. Jack's heroin dependency may
be a little out of the blue, but it functions
magnificently as a method of externalising
the scars he carries after the events of the
previous two seasons. Similarly, Kim no
longer has to put herself into ridiculous
situations to grow as a character. Instead
we get to see her develop within the
confines of the CTU building. Her fears for
both Jack and Chase are what gives us
sympathy for Kim, rather than just
observing her blundering into more idiotic
situations episode after episode.
So there you have it, an excellent series
with incredible production design, superb
performances, unpredictable plotting, an
unrelenting pace and, this year at least,
no bloody cougars.