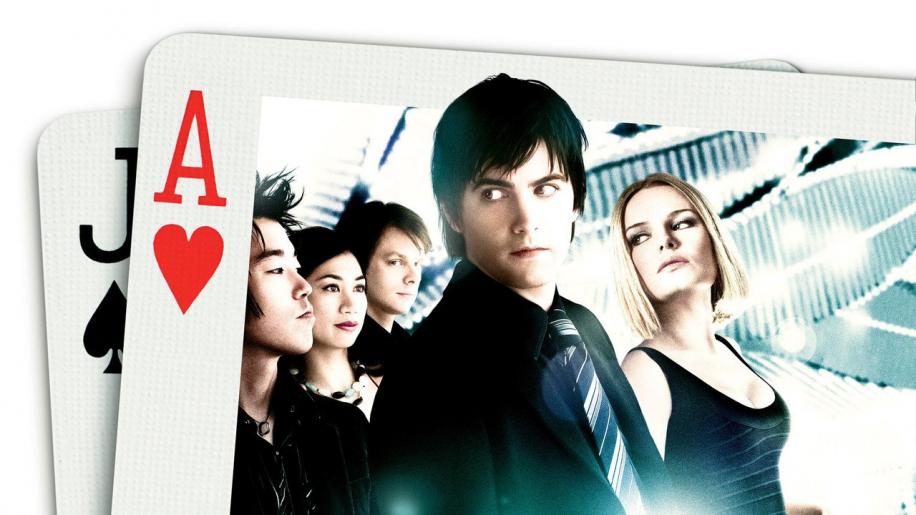 From the late 1970's through to the end of the century a group of highly intelligent students from a number of universities in the States got together and realised that their combined mathematical skills could enable them to take a run on the casinos in Las Vegas by card counting at the blackjack tables. This story has now been brought to our screens via director Robert Luketic and a number of worthwhile actors, Kevin Spacey, Jim Sturgess and Aaron Yoo. Luketic's most known feature to date was the laughable Legally Blonde but with Spacey in tow surely something had to go right.

Professor Micky Rosa (Kevin Spacey) is a mathematics professor at M.I.T; he's an old gambler who now funds his way through life teaching and funding card counting teams who in turn raid the tables at Las Vegas. The team he puts together consists of Ben Campbell (Jim Sturgess), Jill Taylor (Kate Bosworth), Jimmy Fisher (Jacob Pitt), Choi (Aaron Yoo) and Kianna (Liza Lapria). These A level students have the mathematical mind and composed personality to enable them to go to a number of black jack tables, count cards and ultimately if they play by their own rules come away with a stack of cash.

And this is what ultimately happens. Ben, initially reluctant to join the group eventually caves in and goes along for the ride and for the woman he has had his eye on for some time, Jill. He's a superb student only doing this to make enough money to pay his way through Harvard Medical School. To these ends his life changes completely, he quits his low paying store job, loses track of close friends and ultimately pays the price for living the high roller life.

A film about cards, with a hint of The Sting thrown in and with Kevin Spacey taking on one of the lead roles... well sign me up. I'm a lover of card games, have always enjoyed an individual or group pulling a legal fast one on a large organisation and as for Spacey, well I think most will admit that he adds a touch of shine to every production that he has appeared in; from the glorious heights of Usual Suspects and American Beauty through to his lesser roles of say Midnight in the Garden of Eden or Ordinary Decent Criminal. It seems as though he can do no wrong and certainly has to be regarded as one of the premier actors of our time.

The other actors play their roles suitably enough with Sturgess showing a maturity beyond his years as he goes from geeky student who's not necessarily more interested in science projects than girls, it's just that he knows he has no chance to woo the girls which all the sports jockeys do. Bosworth, much like her earlier role in Superman Returns does nothing special merely being the love interest shoe horned in there for Sturgess to play off. Pitt and Lapria are much the same in this regard; they are obviously needed for the main protagonists to play off but they add little else to the mix. It is Aaron Yoo who really comes across as the dark star continually there in the background but always a character and an actor to keep your eyes on. He has some excellent scenes in which he's obviously portraying a kleptomaniac and he plays the part with gusto and I for one enjoyed his performance here. It is Spacey yet again though who gives an elementary lesson in acting, he seems to stroll through this feature, his performance is never strained nor exaggerated yet at all times thoroughly compelling as he seems to continually change from light hearted mentor/tutor to a man you would never want to cross in your wildest dreams. Laurence Fishbourne pops his head into the mix as the casino pit boss responsible for catching these legal card counters and plays his character with a sense of disdain as that's how he obviously feels his career has gone now he faces being made redundant by face recognition software.

The movie starts slowly, introducing most of the main protagonists well and allowing the viewer to relate to one or the other, the viewer certainly empathises with what Campbell is going through in his quest to find entrance to Harvard Medical School, something which is only barred to him due to lack of finances. His friends are excellent geeks and they play and know their role in life which is to create robots as opposed to chat up the women in their local bar. The very fact that they did in fact go to a bar though has to be credit to them. You feel a sense of pity somewhat for these characters thinking that they are throwing their lives away and once Campbell choses his new lifestyle you can do nothing other than fly his colours, hoping that he'll take the casino for as much as he possibly can; get his life on track and into the school he has always dreamed of attending.

Once the action moves over to Las Vegas though it's a different kettle of fish, the sound track opens up with rock and hip hop beats, the colours become more vibrant as if living the life in Las Vegas is the true life, not the drab one you left behind. During these scenes the whole pace of the film increases as we see our heroes move from table to table playing out in real life what they have previously been studying in Professor Rosa's night classes. There are always winners though and always losers and during this time I finally remembered what Sturgess and this film finally reminded me of: Risky Business.

It's mentioned at one part in the film by Fisher that Sturgess reminds him of that actor from Rain Man. It's a derogatory statement as he means the part played by Dustin Hoffman, Raymond Babbitt; however I and I'm sure many out there would immediately have thought Tom Cruise. Sturgess comes across as a young Cruise playing exactly the same role as Cruise played in Risky Business; a young man who has yet to explore his own capabilities who travels down that road to find the gold paving he had hoped for is tarnished and always comes at a price. Cruise's character has fun, yes he wins and loses and ultimately wins and much the same can be said for the character of Campbell and the film 21, even the voice over from the main character is much the same as we hear from Cruise in that earlier film. That in itself is no bad thing as personally I've always thought that Risky Business was one of Cruise's better films.

21's a good film to watch it has its high and its lows, not from an enjoyment point of view but the emotions and experiences that our characters have to go through. It never gets boring and it has characters that you can empathise with and you wish they make it through to the end with their face intact. It has the odd twist, some of the character's actions for example but they fit into the film perfectly and are an integral part of the individual plot lines. These keep the viewer on their toes wondering which way this film will turn next. As such I can recommend 21 and again add another Spacey film to my collection; his acting yet again is head and shoulders over what we can usually expect from the Hollywood studios. I will also be looking out for Sturgess and Yoo both of whom I do feel have interesting careers ahead of them.