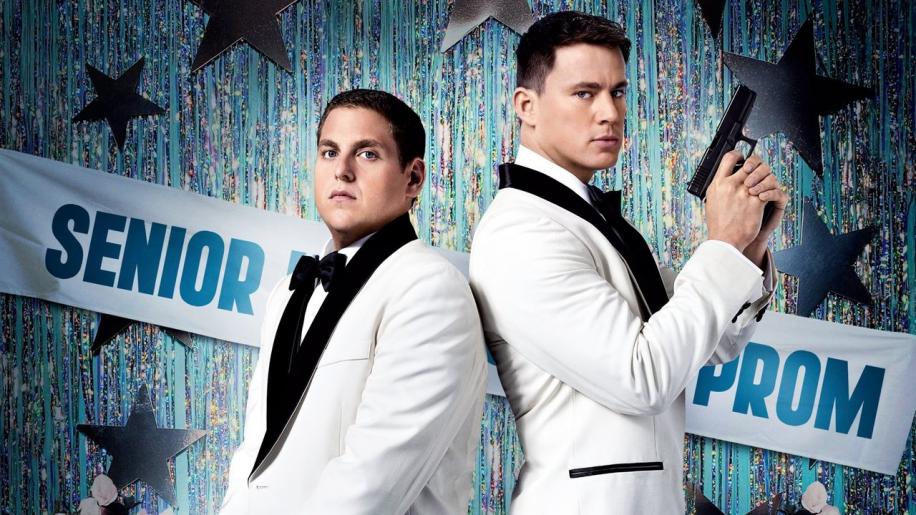 Imagine a remake which outdid all of your expectations: taking slightly insubstantial source material – now very dated and partly forgotten about – and stripping it to its barest concept; then reinventing it with new drive and a new direction, even changing its very genre. Now imagine a remake which mocks all other remakes, poking fun at the lack of originality within the film industry; the lack of new ideas; the prevalence of clichés and tried-and-tested routines – and, worse, the very fact that nobody can make anything good out of all this old material.

21 Jump Street is both of those movies rolled into one, a film which defies anything you might expect if you had seen even a single episode of the earnest 80s young-Johnny-Depp-starring police drama about youthful-looking cops sent back to High School undercover; a film which mocks the very notion of reinventing, reworking and remaking old material; but which also actually acts as not only a remake of but even arguably a continuation of said series.

Schmidt and Jenko were polar opposite high school students: Schmidt moulded himself into a chubby Eminem – with braces – and was mocked for being a geeky outcast; Jenko was the long-haired jock – cool but dumb as all hell. Years later, however, they find themselves side by side at the Academy, training to be policemen. With Schmidt’s smarts and Jenko’s athleticism, the two decide to team up and help each other graduate. Unfortunately they don’t make for the greatest cops, and they soon find themselves reassigned to the ‘Jump Street’ program, where they are tasked with going undercover to bust a drugs ring. There’s only one problem: to find the dealers, they’re going to have to go back to school.

Co-written, produced and starring Jonah Hill – who made his comedy name starring in Superbad and Get Him to the Greek, but recently took a more dramatic turn opposite Brad Pitt in Moneyball – this updated 21 Jump Street is a genius blend of Bad Boys, Hot Fuzz and Superbad itself. And whilst it does not quite reach the giddy heights of greatness achieved by any of those three, it certainly has more than its fair share of moments. Indeed, if it weren’t for a slightly disappointing final act, this would have likely been the funniest film that I’d seen in a while.

The first hour of this film is consistently hilarious, with regular laugh-out-loud moments, as the inept duo strike out at high school, fumble their way through police academy, strike out on their first arrest, and get sent back to high school for good measure. These events respectively form the framework for: a nod to what it was like back at school a decade or more ago; a send-up of cool police partners; a mockery of cop clichés and film remakes; and no end of fish-out-of water hi-jinks as the pair struggle to find their feet in the modern school environment – with so much having changed since they were students themselves. Throw in some classic buddy-buddy comedy, and Ice Cube sending up every angry black Police Captain character ever invented, and you have a superb ride, one which appears incapable of going wrong.

Jonah Hill clearly came up with many of the jokes, funny situations and film reference plot points (in the same vein as Simon Pegg / Edgar Wright / Nick Frost did for Hot Fuzz, Shaun of the Dead and Paul), and also plays the part of Schmidt perfectly, both initially as a hesitant geeky outcast and the, as the film progresses, embracing his inner-geek because the new school cliques revel in it rather than ostracise it. He’s at his best when he just lets rip with profanity, pseudo-logical babble and blunt-force-verbosity – as those familiar with his Superbad character will already know – but he has plenty of physical gags here, some of them involving moving vehicles! And whilst his weight loss could have had that Samson effect on his performance, robbing him of his comedy persona in much the same way as Seth Rogen’s slimmer physique ruined Funny People, Hill’s still got plenty of awkwardness about him which makes for hilarious antics.

The real surprise though is Channing Tatum. The man who made a pretty poor name for himself doing films like Fighting and Dear John; who seemed to be cut from the same wood-based cloth as Sam Worth(less)ington – as evidenced by G.I. Joe: The Rise of Cobra; and who single-handedly put me off Al Pacino’s latest film (The Son of No One) actually appears to have redeemed himself somewhat with his last couple of roles. His against-type performance in Soderbergh’s punchy action-adventure Haywire – the worthy debut of MMA fighter Gina Carano – gave viewers a different side to his usual lacklustre, vacant lead roles, and now, with 21 Jump Street, he shows an even broader range, proving that he is capable of pretty good comic timing too. Unfortunately his two steps forwards still look to be followed by a step back – G.I. Joe: Retaliation – but his future in a couple of Soderbergh movies, and with a sequel to Jump Street, actually looks more promising than anybody would have ever expected.

Indeed, whilst Jonah Hill provides all of the obvious laughs, fast lines and hilarious physical comedy, it’s Tatum that offers a marginally more subtly nuanced straight foil for Hill’s geek, finding his good looks and jock status leave him a complete fish out of water in a modern school environment, where eco-warriors rule the day, and where he is as much of an outcast as Schmidt was back when they were both first at school. His plan to ‘hit the first guy who talks back at him’ stunningly backfires within seconds of being undercover, with his charm and physicality only really having an effect on one of the female teachers (The Office’s Ellie Kemper, on superb form, far more effective than in Bridesmaids). In fact it’s not long before Jump Street finds Tatum channelling his own inner geek, and it’s amazing to see that he can do a convincing delivery of a line like “It’s my potassium jumper, thanks for noticing.”

Of course this would be an Apatow-era comedy without the presence of a whole plethora of familiar comedic faces, from Rob Riggle (The Hangover, The Other Guys) as the aggressive but odd P.E. teacher to Jake Johnson (Get Him to the Greek, New Girl) as the hilariously over-anxious school Principal. James Franco’s Twilight-era younger brother, Dave Franco, plays the schoolkid fronting the drug dealing; Brie Larson (Rampart, Scott Pilgrim) as Schmidt’s sweet love interest; and, of course, Ice Cube (Boyz n the Hood, XXX: State of the Union) gets a fantastic role as the police Captain commanding the Jump Street units, sending up his own tough guy image, and firmly pushing this film into R-rated territory as a result of his trademark Tourettes dialogue.

The film itself, as already noted, works on many levels. You’ll find subtle slights against everything from skinny jeans (“try running in these!”) to Glee; from spontaneously-exploding cars in action movies to slo-mo jumping-through-the-air-whilst-shooting; from John Woo’s doves to, of course, basically anything to do with 80s remakes. Beyond the Hot Fuzz approach, here done US-style, there’s also a more conventional Bad Boys-esque buddy-buddy story arc, which actually gives this films some heart, and has the two mismatched cops treading in the familiar footsteps of their idols, albeit with more comedy to keep the momentum going.

In fact the momentum only starts to fade towards the end, when the inevitable ‘misunderstanding’ sees the bond between the undercover duo begin to unravel, leading to an increasingly improbable, over-the-top grand finale which throws in far too much action and violence, leaving the earlier, more aggressive comedic tones in its dust. There’s really no reason why we should have to see characters bleeding out slowly from neck, or gaping head wounds, in a movie like this; nor any reason to see typically gross-out genital dismemberment – it’s just not necessary. Despite the swear-counter going off the scale (mostly thanks to Ice Cube), graphic violence is a whole different ball-game, and feels totally out of place in these surrounding. And I can’t help but blame the surprise A-list cameo star who pops up in the last few minutes of the film and attempts to steal attention away from his own lacklustre career of late. Don’t get me wrong, I think he should have made a cameo – and clearly Hill and the other writers wanted to have some measure of continuity from the old series – but this was just too silly; his reportedly improvised lines devolving swiftly into a barrage of confusing nonsense.

I don’t know why it is that movies like this find it hard to finish on a high note without going massively over the top. Whether it’s The Other Guys or even the UK’s own Hot Fuzz, it seems evident that sometimes less is more, and yet none of them seem capable of shying away from a ludicrous grandstanding climax (like Hangover Part 2’s boat sequence). It’s a shame because, with a little more refinement, 21 Jump Street could have been an excellent comedy, rather than just a very good one.

Still, packed with topical pop culture references, irreverent humour, quotable lines and equally funny physical gags, 21 Jump Street has more than enough laugh-out-loud moments (the tripping sequence is one of the most hilariously innovative hallucinogenic scenes ever shot) to guarantee a fun evening at the flicks. It has some quality performances from its two well-matched leads, enough character development – and enough heart – to genuinely make its mark amidst the myriad similar Apatow-styled entries that have come out over the last few years, and it also retains that welcome self-awareness of all these recent comedies, which embrace and poke fun at the genre clichés and conventions that abound. Lacklustre conclusion notwithstanding, I’m already looking forward to the recently announced sequel, where the boys go back to College. Recommended.

Packed with topical pop culture references, irreverent humour, quotable lines and equally funny physical gags, 21 Jump Street has more than enough laugh-out-loud moments to guarantee a fun evening at the flicks. It has some quality performances from its two well-matched leads, enough character development – and enough heart – to genuinely make its mark amidst the myriad similar Apatow-styled entries that have come out over the last few years, and it also retains that welcome self-awareness of all these recent comedies, which embrace and poke fun at the genre clichés and conventions that abound. Lacklustre conclusion notwithstanding, it’s still a pretty damn funny watch that’s probably worth checking out.