Maybe they transposed the 1 and 2. 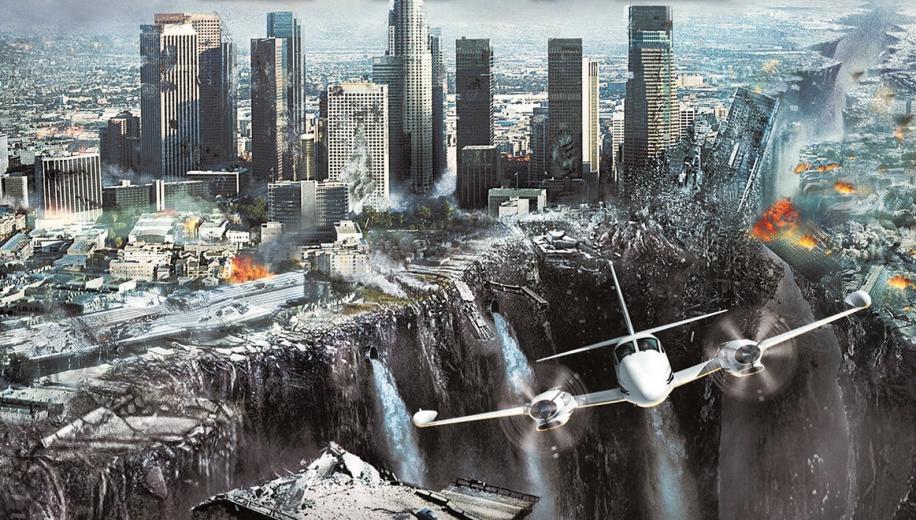 Disaster movie maestro Roland Emmerich delivers a greatest hits effort here with his epic 2012, which can't really be faulted for doing exactly what it says on the tin, and provides a pretty effective experience in 4K with Atmos.

After Independence Day, Godzilla and The Day After Tomorrow, Emmerich had pretty-much secured his reputation as the go-to filmmaker for blockbusters about blowing famous monuments up, shooting for full apocalypse here, and basically hitting the mark. 2012 is a poster-boy for thin characterisation and ridiculous running/driving/flying away from explosions/earthquakes/tsunamis, but few going into this disaster blockbuster by THE disaster movie director would have any right to expect anything else and, if nothing else, it certainly gets the job done in decimating the planet spectacularly.

When the earth's core starts to destabilise, the Mayan prophecy appears to be proven true, with the world given but days to put into action a plan that Governments have thankfully had in store for years - to put a lucky few hundred onto vast arks that will hopefully be able to ride out the storm.

One of the defining modern disaster movies

2012, in some ways, is the pinnacle of Emmerich's disaster oeuvre. He'd dabbled with aliens blasting up the White House in Independence Day, had Godzilla trampling through New York, and froze the planet in The Day After Tomorrow, but 2012 has the whole lot wrapped into one - and a whole lot more. Volcanoes, earthquakes, tsunamis - a great flood to end all floods - it plays out as a succession of escape sequences from increasingly effects-laden natural disasters (Cusack's writer/limo driver driving through an earthquake, then running away from an eruption and flying through basically the end of the world in increasingly big planes - and that's before we even get to the boats).

Sure, the characters are wafer-thin, but the fact that Emmerich even tries to paint some characters here should only be taken as a plus, with an all-star cast game for some ridiculous calamity, remaining poker faced through the disastrous chaos. Probably one of John Cusack's biggest movies, the ensemble affair pulls in a typically earnest Chiwetel Ejiofor (whose on-screen dad does the best acting in the whole movie), a wasted Thandie Newton (compare her here to her tremendous work in Westworld), Amanda Peet, Oliver Platt and a manic Woody Harrelson (is there any other?), whilst Danny Glover makes for an uncharacteristically dedicated President. Really, though, the disaster is the star, and that's handled on a suitably epic scale, even if - 12 years later - the effects don't always hold up. The explosions, eruptions and all-round chaos provide superb entertainment, but you have to get past the GTA-level video game effects sequences (the limo vs. flying cars sequence looks more Train to Busan: Peninsula than Fate of the Furious) so you need to be extra-forgiving on a rewatch, although thankfully the final act still stands up and looks stunning. And, honestly, who comes to epic Emmerich for anything other than epic mayhem, which this really does deliver, particularly when it hits its unexpectedly impressive final act, stretching the runtime but also dialling the chaos up to 11 to round out one of the defining modern disaster movies.

2012 comes to UK 4K Blu-ray courtesy of Sony Pictures Home Entertainment. This Ultra HD Blu-ray release follows the pretty-much expected consistently very-good-to-high standards Sony generally delivers for their 4K output, despite working with a 2K upscale, affording the 12-year-old blockbuster a decent scrub-up and sheen, and added vibrance from the HDR, even if the effects sequences still stand out - for good and bad.

2012 had a pretty hefty $200M budget which, back in 2009, was not insignificant, but it was also a ridiculous 158 minutes in length, with a slew of heavy effects sequences that needed to be serviced. Unsurprisingly, some turn out wildly better than others, with the entire second half of the movie (and extended closing sequence) looking the best, whilst the first half - and most notably the limo sequence and parts of the first flying setpiece - not holding up quite as well. There are plenty of green screen shots / in car shots, and pure CG moments which have a very heavily processed feel, which goes beyond even the bronzed feel to the overall colour scheme. Nevertheless, moving past these bits, and the inherent fluctuations they inevitably lead to in the presentation, and the overall image quality is pretty damn good, delivering refined detail that transcends the ostensible limitations of a 'mere 2K upscale', and a slick, clean image which is also just the right side of polished. Clearly almost every release has to employ some degree of DNR - the question is really how well it's implemented - and the efforts here are very good indeed, with softness kept at bay, but a modern, clean look to the piece nonetheless.

The colour scheme is pretty hot, affording the film a particularly burnished look which mostly works - certainly befitting to the Californian opening setting - and only really gets out of control during the aforementioned heavy effects sequences, which is perhaps to be expected. HDR and WCG deliver a vibrant, vivid palette extending across the spectrum and providing impressive peak whites and deep inky blacks, and rich tones between. Certainly there's frequently something of a stylised look, and the strobes and handhelds in the final act work together to give it an almost HFR look, but it mostly all works for a feature which has never really looked better than this, boasting some absolutely glorious demo moments - the night time lava flats across Hawaii positively glow - rounding out a very nice looking presentation that makes for a decent upgrade over a decade-old Blu-ray presentation which was no slouch in the first place.

2012's 4K Blu-ray release upgrades the audio too, at least in terms of immersive qualities, affording the film a boisterous and expansive Dolby Atmos track that also carries a healthy amount of thunderous LFE weight in the mix.

Dialogue comes across clearly and coherently throughout, prioritised across the frontal array, whilst the score provides welcome support, boosting the material for the surrounds to trade in, and embellishing the already immersive experiences. Of course the 3D High Definition object-based immersive audio elements really mostly come into play when it comes to the effects, building with some subtle observations during the opening scenes, and affording a welcome LFE underpinning, whilst key setpieces - however smothered the multiple overlaid effects might become - literally throw everything at the screen, and your living room in the process.

2012's decade-old Blu-ray boasted a then-utterly reference DTS-HD Master Audio 5.1 track and it's interesting to compare the two as, whilst the Atmos is clearly leagues ahead in terms of object-based directionality, both around and above, and whilst it does have some pretty undeniably impressive, almost consistent LFE weighting, some might understandably have been concerned that the track may have had something of an ostensibly neutered ultra LE a la War of the Worlds 4K's Atmos (which, for the majority, still sounded spectacular). Thankfully, at exactly the same - as-close-to-reference-as-you-can-get-without-breaking-things - level, the Atmos absolutely blows away the DTS track, allowing you a thunderous ride through two-and-a-half hours of wanton destruction. It may not be quite as stomping as the Blade 4K﻿ disc's Atmos nor quite as foundation-cracking like the DTS track on Tenet's exceptional 4K release, but it is still pretty damn impressive.

Sony's 4K release of 2012 reportedly provides all of the extras and more, although the 4K test disc itself holds only a 45 minute Discovery Channel documentary on 2012, as well as some trailers, with the remaining extra features presumably on the accompanying Blu-ray.

All of the extras and more

The original extras were nothing to complain about, covering all the bases with a Commentary, several Featurettes, some Deleted Scenes and an Alternate Ending. Hell there was even a Picture-in-Picture track, reminding us just how old the disc was.

2012 is pretty impossible to rate. Logically, put up against all but Emmerich's own works (and perhaps those of the likes of Bay), it's pretty damn weak, but - then again - it does precisely what you would expect from a Roland "Independence Day" Emmerich movie about the end of the world, and then some. It's the ultimate greatest hits end of the world tribute movie.

It does precisely what you would expect from a Roland "Independence Day" Emmerich movie about the end of the world, and then some

Sony's UK 4K Ultra HD Blu-ray release of 2012 is another strong effort from the studio, doing its best with a 2K upscale (and some pretty variable effects) and delivering some tremendous Atmos accompaniment to round out a solid few hours of disaster movie home entertainment. A bunch of extras round out a release that fans will likely lap up.