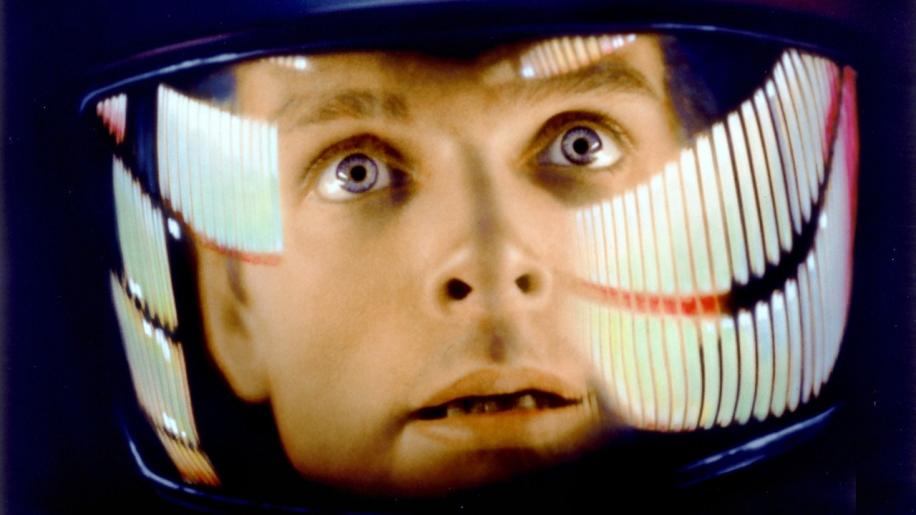 Let me say at the outset that I really don't believe that a discussion of 2001 can be achieved without mentioning a wealth of spoilers, and I certainly intend to do so here, so if you haven't seen 2001 then please just skip this section. When people ask me if they should watch it I tend to say... "I really can't say, you really do have to watch it and make your mind up yourself!". A circular argument if ever there was, but unfortunately there's just no way to verbally describe the film without going into some of its finer aspects. As Kubrick himself said "I intended the film to be an intensely subjective experience that reaches the viewer at an inner level of consciousness, just as music does...You're free to speculate as you wish about the philosophical and allegorical meaning of the film."

You pop the disc in your player and like The Dawn of Man your journey begins. The premise of the story, based on Arthur C Clarke's 1948 short story The Sentinel, is easy enough in itself to follow and understand. Scavenging for sustenance in the form of roots and small plants, the apes are starving, dying out. There's not enough to sustain them all in the desert arid landscapes; water is a precious commodity in short supply itself. If that's not enough to contend with they are hunted by more aggressive species, leopards and the like. Suddenly one morning, they wake to find a large unusual shaped object at the entrance of their shallow caves. This object should not be there, should hardly even exist, and it's beyond their comprehension to understand its basic form. This large richly black perfectly smooth apparition, the monolith, which itself has had starring roles in countless TV shows since its birth, was initially designed by Clarke as having visual images embedded; imparting its knowledge to these hapless hominoids. Overruled by Kubrick though the form of what finally came on screen has become iconic, there's no need to show anything else about this structure. Its purpose becomes clear in subsequent scenes and Kubrick's never one to waste screen real estate on images he doesn't need to show.

In the aftermath of this encounter prehistoric man wanders on his way, only to realise one day that he can create tools. In a flash of inspiration one of the apes understands that he needn't eat just roots, he can eat the flesh of the multitude of tapirs which wander amongst him, all he needs are the tools to make him strong. And so whilst playing amongst some bleached bones he creates the first tool and the first implement for destruction. So man starts a journey of reliance on machines and tools. With his newfound power he goes one step further in allowing his fledgling race to survive. Whilst competing for a water hole an ape from an alternative pack is killed. So man starts on his journey of ultimate destruction. What follows is pure cinema in what is regarded as one of the simplest yet audacious cuts of all time, a thrown bone (the weapon of destruction) immediately cuts to an image 4 million years later to another weapon; an orbiting nuclear spacecraft, floating peacefully in orbit around the earth. In one cut Kubrick dispenses with the need to explain those 4 million years, he accepts the audience has the intelligence to not be told mans advances through the years and his reliance and creation of his precious tools.

It is at this point though that some audiences throughout the years, especially those of more recent generations growing up with ships with go faster stripes and noisy engines, take umbrage. The slow deliberate manoeuverings of a commuter ship approaching and docking with a space station, in the shape of man's best tool; the wheel, set to the beautifully crafted waltz of Johann Strauss' Blue Danube was not what the audience expects. However Kubrick here wants to show the grace and beauty of all that man has achieved, the grace and beauty of flight unencumbered by the banal forces of gravity and friction. Add to this the sheer technical brilliance and scientific correctness of this and subsequent scenes, you can see why Kubrick was regarded as a perfectionist... always striving to offer up a vision which would be correct regardless of subject matter. Framing of this shot like all others before and after is eye catching. Following the small dart like craft on approach and the camera ultimately tracking forward into the hub of the wheeled station is framing at its best; the beauty and visual impact has never been bettered. A picture says a thousand words and here Kubrick is re-enforcing this proverb, still not a word of dialogue has been uttered, yet the viewer is completely aware of form, progression and meaning. Like the apes so many years before though man is still growing. Even in this grand technological age he is still a child, as measured in the history of the universe. In his new environment he has to learn to walk again, eat again, talk again and go to the toilet all over. With these four simple scenes on film, never overly highlighted nor deliberated upon Kubrick shows that whilst man may have evolved somewhat he is still at the start of his journey. At this section's end we see another monolith, buried on the moon some four million years ago. Man has unearthed it and so the next stage in their collective journey begins.

Mans reliance on his tools continues in the next section. On route to Jupiter, Saturn in the original screenplay but only changed as Kubrick thought the special effects would not be capable of doing Saturn justice, we meet Dave Bowman, Frank Poole, three scientists in hibernation and an electronic nanny and ship co-ordinator, H.A.L. Bowman and Poole rely on this new machine, this new tool, completely. They depend on him, and note mentioned as a person not an entity as H.A.L. shows more emotional development than either two crew members They are dependand for their food, their sunlight, their entertainment and their discussions. Man has come to rely on his tools far too much; they are becoming mere shells of what they once were. Whereas the start of the film shows the apes starting on their evolutionary path here we are shown a machine embarking on the same yellow brick road. It is H.A.L. who develops the most, ultimately becoming paranoid and displaying what can only be described as human emotions. In his paranoia H.A.L. start exhibiting signs of deterioration and failure, something the crew cannot accept. On deciding to disconnect H.A.L. and continue the mission manually H.A.L. outmanoeuvres them, chess like, killing the hibernating scientists and Frank Poole. Only Dave Bowman, as a representative of the whole human race, remains. In the end he outwits the far superior intellect of H.A.L. and using one of man's simplest of tools disconnects him.

Bowman eventually comes face to face with the penultimate monolith. Floating in the orbit of Jupiter is a massive variety, still perfectly formed, still unexplained and unimaginable. On approaching this silent entity Bowman is swept up along a space/time corridor in one of the most memorable scenes throughout all of cinema history. The following stargate images were picked up by the summer of love generation and assisted by a few chemicals, natural or otherwise, embarked on their own journey; their own trip. But it is this final section of the film which separates the viewers into two camps. Get it and you love it, don't get it and you feel that the preceding 2 hours have been a waste of your life. Bowman is brought through space and possibly through time to the home of the alien beings which, in only a blink of their eye, left Earth to let man progress as best he could. Finally man has shown he is still capable of evolving, Bowman's confrontation with H.A.L. proves this. No matter his current emotional state he still has the intelligence that very first monolith tried to impart. Time and space become meaningless though and Bowman sees himself age in stages, and these stages lead him to his final destiny. Eventually his corporeal body dies, and in a scene almost transferred from the Sistine Chapel, Bowman on his death bed reaches upwards, his fingers trying to touch his own God; the monolith has manifested itself in the area where Bowman's body dies but his spirit continues. Now free from the tools which initially caused man's ability to evolve, but which now perhaps limit that evolution, Bowman is free to travel wherever he likes, whenever he likes. And, completing his own Odyssey, he returns to Earth to ensure that these tools, no matter how advanced or complex will never again bring fear and destruction to the human race.

2001: A Space Odyssey is many things, a visual feast for the eyes, and aural one for the ears. People are still discussing the Mona Lisa 500 years after its creation. Why though, just because she sports an enigmatic smile? I have no doubt that Kubrick's 2001 will still be discussed long into our future, why? Unlike most throwaway movies which are fantastic pieces of entertainment, 2001 goes a step further; it has become art! Kubrick is a master of the visual image, his early career as a photographer perfectly lending itself to the career he would ultimately choose. The shot composition and structure within 2001 has never been bettered from the close, tight shots of a dying breed of apes to the flowing orchestral manoeuvrings of a ship in space to the final stargate maelstrom sequence.

The allegorical themes presented in 2001 though are what have caused all of the debate for the past 40 years. Here I have perhaps presented one such theme, that of man and his reliance on tools as a means of evolution but also as an ultimate means of his destruction. The main discussed theme though is that of evolution and the God concept. Kubrick, a notorious atheist was quoted "I will say that the God concept is at the heart of 2001 but not any traditional, anthropomorphic image of God. I don't believe in any of Earth's monotheistic religions, but I do believe that one can construct an intriguing scientific definition of God". With 2001 he of course successfully achieves his goal. Mapping man's own evolution until we understand that this is the future for all beings; all beings will ultimately become unrecognisable from a God figure. The use of Richard Strauss' Also Sprach Zarathustra re-enforcing the God concepts of Nietzsche's philosophical writings on the same subject, This Sprach Zarathustra. The questions which are raised throughout the film make me return to this at least a couple of times a year, I continually see new things or question my own concepts of what the film is about. I realise that this might not be entertainment in the strictest sense of the word for a large majority of people, but for me I've rarely come across anything better on celluloid.