Without Hobbs and Shaw, the lack of Vin Diesel's larger-than-life Dom Toretto is near-fatal 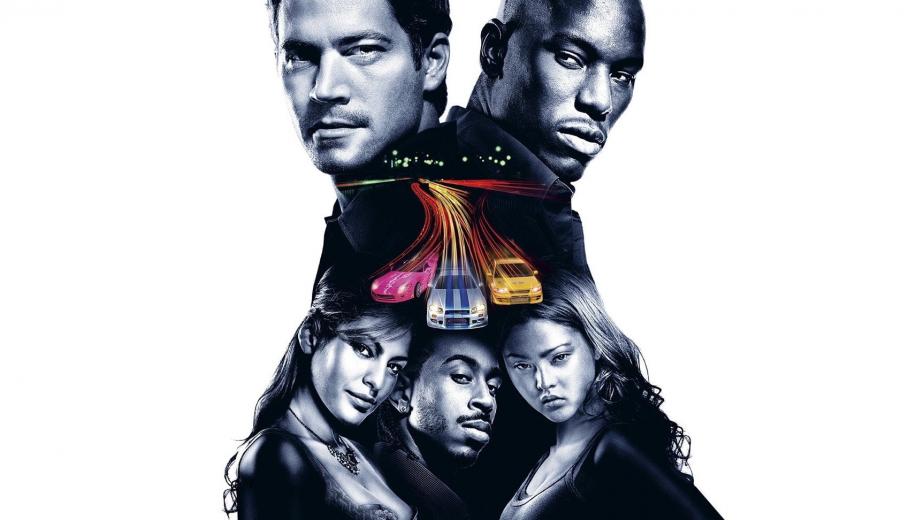 Arguably one of the weakest films in the series, despite having the strongest director in the late John "Boyz n the Hood" Singleton, this sequel missed star Vin Diesel but still delivered some cheesy entertainment.

Since the franchise was supposedly original conceived with Walker in mind as the lead, they went ahead without Diesel anyway, and somehow secured the late John Singleton to direct (Singleton professed to have grown up with street racing in South Central LA), who brought with him the star of his 2001 film Baby Boy - who had made his acting debut there - rapper Tyrese Gibson as Walker's replacement co-star.


Frequently overlooked, and all the better for an unfamiliar revisit as a result

The set-up tries its best to run with the ridiculous ending of the first film, seeing Walker's disgraced cop picked up by the FBI after winning an illegal street race, and offered an opportunity to clear his name by going undercover to bust Cole Hauser's drug kingpin, electing to partner up with his childhood friend, played by Tyrese - who is harbouring a grudge against him - to get the job done, with Eva Mendes' deep undercover US Customs Agent helping them on the inside.

Although Singleton isn't exactly all that comfortable with action, nor with how to stylise the piece (often resorting to slow zooms, angles and even upside down cameras which don't really suit the throwaway action junkie moves), and he doesn't have enough meat here to bring the streets alive - which is surely what attracted him in the first place - but he does a solid enough job, enjoying the biggest budget of his career as he throws money at over the top setpieces that, thankfully, still have some practical work in them.

Walker also isn't a halfway bad lead - although the dress code in this sequel is frequently criminal - and Tyrese plays a much less over-the-top version of his future caricature, with the two enjoying some degree of chemistry which marks a highlight in a weaker entry that's also frequently overlooked, and all the better for an unfamiliar revisit as a result. Ultimately, though, the series wouldn't get back on track until Diesel returned to the fold.


If fans weren't spoiled by the quality of the first film's 4K presentation, there would probably be far fewer complaints

Considering it's the more recent film, and it had twice the budget to play with, it's somewhat surprising to watch this straight after the first outing - which had a largely stunning native 4K presentation, despite some serious colour regrading - and find that, whilst an absolutely undeniable monumental step up over its 1080p/AVC-encoded Blu-ray rendition, 2 Fast 2 Furious just doesn't look as good as its predecessor.

Detail is still frequently impressive - but also frequently softer - with several excellent shots that remind viewers what 4K is about when it comes to rendering classically filmed features, but a few too many shots that look too soft, with more than a hint of digital manipulation to reign in the natural grain (the first film's 4K rendition displayed the same but in a more subtle, acceptable way), and a few shots which also - perhaps most strangely - just don't look all that clean.

The colour scheme hasn't been as aggressively handled as on the first film's 4K rendition, and you actually miss that added style, but WCG and HDR still work their wonders on the myriad vibrant tones that pervade the feature - car colours being the most obvious, but, perhaps ill-advisedly, some of the leads' outfits also desperately colourful. Black levels are strong, affording a deep backdrop for the primary and neon-streaked landscape and, overall, it's such a tremendous upgrade over the preceding disc that, if fans weren't spoiled by the quality of the first film's 4K presentation, there would probably be far fewer complaints.

Dialogue remains a firm focus, given clear and coherent dissemination throughout, whilst effects lap up the myriad engine sounds - even little things like the gratuitously over the top vents on Brian's Skyline, the beeping info delivered by the on-board computer, or the wind-whipping sound of the cars screaming past the practically static traffic they encounter, get afforded wondrous presence across your array. Of course, the screaming revving of the engines, booming with LFE weight, whilst the suitably punchy gunshots, whipping helicopter blades and higher pitched motorboat engines all go towards making this a hearty immersive audio meal.

Composer BT, who scored the first film, gets replaced by the man of the moment back in 2002 - David Arnold - who was midway through a run of Bond scores (and, perhaps more pertinently, had worked with Singleton twice before), and whose electro-infused but eminently lighter scoring, for some reason, feels that little bit more dated than BT's accompaniment for The Fast and the Furious. Nonetheless, fans should be grateful that Ja Rule was absent this time around (not that anybody noticed), having balked at the paltry half a million dollars on offer for his return (over three times what he got in the first movie), and the soundtrack is better as a result too, with Ludacris replacing him both in terms of song tracks and in role (a role which continues to the latest entries). Certainly, the songs chosen still provide an absolute highlight on this immersive track - particularly when they cross that diegetic boundary during some of the pre-race prep - and all in all it's a tremendous aural accompaniment.

As with the first film, it's only the Audio Commentary that gets ported over onto the actual 4K disc

As with the first film, it's only the informative Audio Commentary, from director John Singleton, that gets ported over onto the actual 4K Ultra HD disc proper, whilst the remaining selection of features - matching up to previous releases, and including a number of Featurettes, a prequel Short Film that bridges the gap between this and the previous chapter, a few Deleted Scenes and a Trailer - are on the accompanying Blu-ray disc.

NB. The complete 4K Collection also comes with the same Blu-ray bonus disc that the 7-film Blu-ray collection sported a couple of years' back As a box set gets released debuting the 4K upgrades for the missing entries in the series - the fourth and fifth films - we look back at the first three as well, including this weaker entry which is still worth a revisit, particularly with its excellent native 4K video upgrade and stomping immersive audio mix.