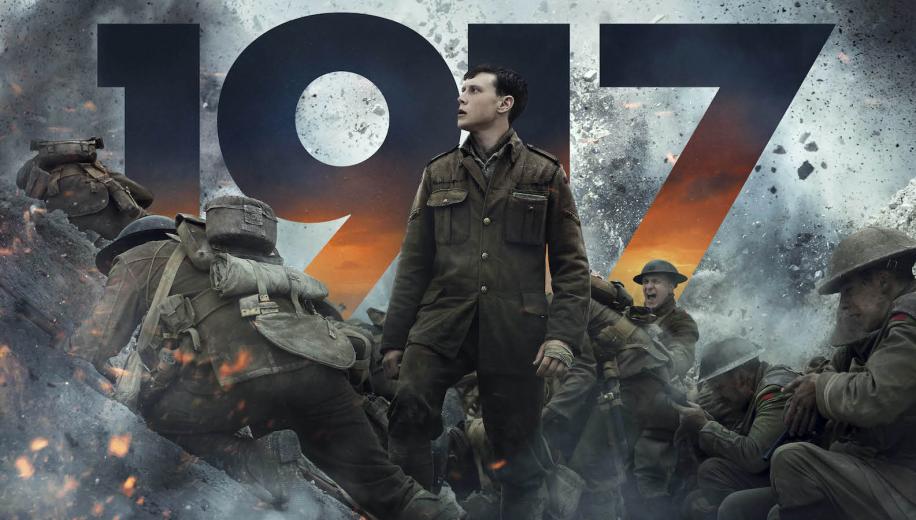 Mining war for cinematic images has been a favoured pastime of Hollywood’s top directors for decades. Everyone from Steven Spielberg to Kathryn Bigelow, Christopher Nolan to Quentin Tarantino has used the horrors of conflict for inspiration in recent years.

For 1917, director Sam Mendes combines with legendary cinematographer Roger Deakins to create one of the most ambitious and visually-arresting war movies to hit the big screen. The film is presented as though it was shot in two long continuous takes; if you pay close attention you can spot where clever cuts have been added, but the attention to detail and ambition on display here really is impressive. Though the film is set in crowded and vast settings, from underground bunkers to fiery battlefields and boggy trenches, Mendes never misses the opportunity to show the small, quiet details (the splashes of mud from the corporals’ boots, the way cherry blossoms float on the air, the variously sleeping/weeping/panicking men in the trenches who number in their thousands).

The effect is immersive in the extreme, as though we’re travelling through the war with our heroes in real time. 1917 follows two young British soldiers Blake and Schofield (Dean-Charles Chapman and George MacKay), who are given an incredibly important mission by their general (Colin Firth) – they must relay a message across the trenches to let Colonel MacKenzie (Benedict Cumberbatch) know that he’s about to lead his men into a deadly trap.

The brave duo begin their journey across the deathly warzone, encountering imminent danger, pain and heartbreak along the way, and encountering a veritable A-list slew of soldiers as they go (variously running in to Andrew Scott, Mark Strong and Richard Madden on the battlefields).

The film marks Mendes’s first as both writer (in collaboration with Krysty Wilson-Cairns) and director, and the long filmmaking process has already been fairly well documented – you’ll have been hard-pressed to see a new release over the last few months without watching a 1917 behind-the-scenes short before the trailers. Even knowing how much rehearsal and planning and incredible attention to detail has been put into every shot, it’s still simple to suspend disbelief and be fully immersed in these two characters’ journeys as the film traverses different landscapes and perspectives.

Sometimes the camera follows Blake and Schofield’s steps, sometimes it shows us what they see, and sometimes it shows us them seeing the war unfold in front of them. The audience never learns more than the two Corporals, making every literal twist and turn an edge-of-your-seat one. There are a few moments that are genuinely shattering, and while there’s plenty of visual reference to the bloody injustices of war it’s never used for empty effect or shoved up to the lens.

The long-take is obviously not a new concept in filmmaking – notable examples include Alfred Hitchcock’s Rope and the recent Academy Award winning Birdman by Alejandro G Iñárritu. Lots of the talk around 1917 has suggested that the film’s concept is one single long take – in fact, there’s one very pronounced, poignant and deliberate cut midway through the film that bisects it in two. Having a big cut doesn’t lessen the impact of the film at all – in fact, the way the cut lands, the way the screen is black, is an incredibly impactful moment.

The technique on show here is nothing short of extraordinary; the staggering skill of master Deakins, the mind-blowingly sprawling sets, the immersive design, the barely-there camerawork, the deft direction.

Seeing 1917 in IMAX is astounding, and writs Mendes and Deakins’s work large on an unflinchingly broad canvas; the film itself is already an assault on the senses, though seeing the remastered IMAX version is really powerful, and makes the booming sound design resonate that much more and the visuals even more vivid.

There’s certainly something raw about the film, which almost offers a newsreel-esque look at war, thanks to the ostensibly non-cut shots and the perfect casting of MacKay and Chapman as two ‘ordinary’ soldiers tasked with saving hundreds of lives. By displaying the unfiltered hardness of conflict in this way, the film could easily come off as a little hollow, but manages to offer harrowing insights into the empty-eyed horror these men saw and experienced in a way that doesn’t feel gratuitous. It’s a welcome respite from war films from previous years which have seemed overly partisan, jingoistic and insincere – it’s two young men’s experience of the war, simple as.


Bold, innovative craftsmanship at its best and you can’t fail to be moved by it

It is an interesting reflection on the state of modern media, in an age when much of the most innovative storytelling is being done on video game platforms. The single-shot technique is certainly reminiscent of games like Call of Duty, particularly when the camera follows Blake and Schofield as they scramble through abandoned buildings and corpse-strewn trenches. The technical filmmaking on show here has already been rightfully lauded and will no doubt do very nicely when awards season truly gets going, but the lead performances here shouldn’t be dismissed; both young leads put in real emotional shifts here, effectively standing in for an entire generation who went to war. Chapman offers a warming bit of almost comic relief, while McKay is simply revelatory as a young man against the world.

1917 doesn’t really tell us anything we didn’t already know about war. It perhaps reminds us of the unspeakable horror of it – the death and destruction and unfixable trauma it leaves – at a time when we need reminding of it the most. It’s an audacious piece of filmmaking that’s part post-apocalyptic psychological horror, part classic war film, part pseudo-documentary. Some of the action really is breathtaking – the crash-landing scene and the final sprint to the finish are particularly arresting.

In some quarters, Mendes’s previous filmic efforts have been accused of imbuing too much ‘theatre’ into them. 1917 certainly has some theatre in it, but it’s explosively cinematic and genuinely moving. You’ll leave emotionally drained from the storyline and the Schofield, but also by the scale of Mendes’s achievement. It’s bold, innovative craftsmanship at its best and you can’t fail to be moved by it.