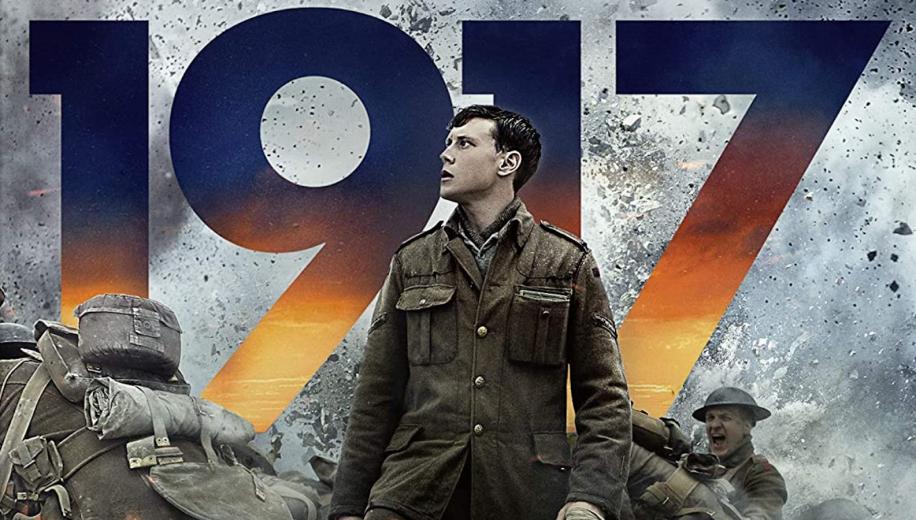 An undeniable technical feat, Sam Mendes' quest for sound, fury and the impression of single-take continuity overshadows all else.

1917 has superb intentions - trying to do for World War I what Saving Private Ryan did for World War II, however the hook is not the dramatic weight, the character design or the compelling narrative, but instead the visual veil covering it all, with Mendes wowing Oscar committees with the kind of gimmick that they seem to love (c.f The Artist's black and white silent film, Birdman single long takes), but sometimes doing so at the expense of the rest of the movie. It's a hell of a ride, but unfortunately not a wholly uncontrived one.

The story's desperate marathon run across the battlefront has two soldiers ordered to get a message to thousands of troops about to walk into a trap. The personal angle is that the brother of one of those two soldiers is going to be amongst the thousands killed. As they go through hell to make the voyage, Mendes attempts to keep the camera on them at all times, by hook or technical crook, never losing sight of his vision which is, after all, the most important thing. Isn't it?

There's a fine line between visually immersive and distractingly contrived, and 1917 doesn't always tread the right side of it

The end result truly wows, but only to a point, remaining visually arresting, but even that unravels a little bit when you consider the fact that it wasn't actually done in one take, but has merely been engineered to look that way, stitching together several long takes into one false whole. It doesn't even have the selling pitch of features like the 2015 German thriller Victoria, where it was actually shot in one long take, and the cost of all that strained technical trickery is occasionally too much to bear. There's a fine line between visually immersive and distractingly contrived, and 1917 doesn't always tread the right side of it.

Less well known actors George MacKay and Dean-Charles Chapman make for a strong pair to guide you through the trip, whilst Mendes drops 'spot-the-next-cameo' big names into each major turning point across the narrative, 'staging' this whole affair extremely well, and hitting some emotional blows in this very personal battlefront voyage.

It's Roger Deakins who ultimately reins supreme. Called upon to deliver stunning cinematography, the legend more than rises to the challenge, with some breathtaking moments that go some way towards smoothing over the story beneath. 1917 if a very good film - sporadically even outstanding - and eminently and undeniably worthy to boot, but Deakins is arguably the only one who truly deserved an Oscar for his work on it.

1917 was gifted a full fat native 4K digital intermediate, capping off source material that was shot at even higher resolutions, and perfectly rendering this oftentimes visually perfect feature. Detail is outstanding, lapping up every little nuance of the dirty, damage-strewn battlefront, the dust-and-dirt-covered visages and tattered uniforms. Messy and occasionally almost horrific, the presentation revels in the textured intricacies, further coming alive superbly thanks to the added assistance of not only HDR and WCG but also Dolby Vision and HDR10+, depending on your poison. The results are sometimes subtle - brighter peak whites, and inkier black depths providing a superb backdrop to the proceedings - and sometimes spectacular (the night-to-sunrise sequence is even more jaw-dropping). Doing justice to Deakins' cinematography, it's a fabulously reference image.

Dialogue remains well prioritised, clear and coherent throughout, rising above the maelstrom, whilst Thomas Newman's score gets fine coverage across the surrounds, knowing just when to sweep you up in the whole audiovisual immersiveness of the piece. Effects are where it's at though, booming with LFE impact when the shells land, as aircraft circle around overhead, guns ring out their hollow death-cries, and explosives detonate and blow your eardrums out in the process. Dynamic and bombastic, it's a hell of a demo offering.
﻿

There's a nice selection of extras on offer here, headlined by a couple of Commentaries, and filled out by some background Featurettes.

A nice selection of extras

The Mendes general Commentary is good and very informative, but fans might defer to Deakin's solo technical Commentary for more insight into some of the visual accomplishments, whilst a quintet of Featurettes, running from just a few minutes in length to almost a quarter of an hour, look into the score, the set and the history of the production.

Nolan's Dunkirk arguably blended technical mastery with narrative punch more skilfully, but nonetheless Mendes - or rather Deakins - has pulled off something frequently visually stunning here, an oftentimes immersive endeavour which ultimately places gimmickry above greatness, and somewhat ironically becomes most notably great for its gimmickry in the process.

1917 if a very good film - sporadically even outstanding - and eminently and undeniably worthy to boot, but Deakins is arguably the only one who truly deserved an Oscar for his work on it

Universal's UK 4K Blu-ray release of 1917 delivers on all fronts technically, with an absolutely tremendous native 4K Dolby Vision (and HDR10+) enhanced presentation and a superb Dolby Atmos track too, as well a some nice extras, leaving this a must-have purchase for fans, and a film that's certainly an unmissable watch.