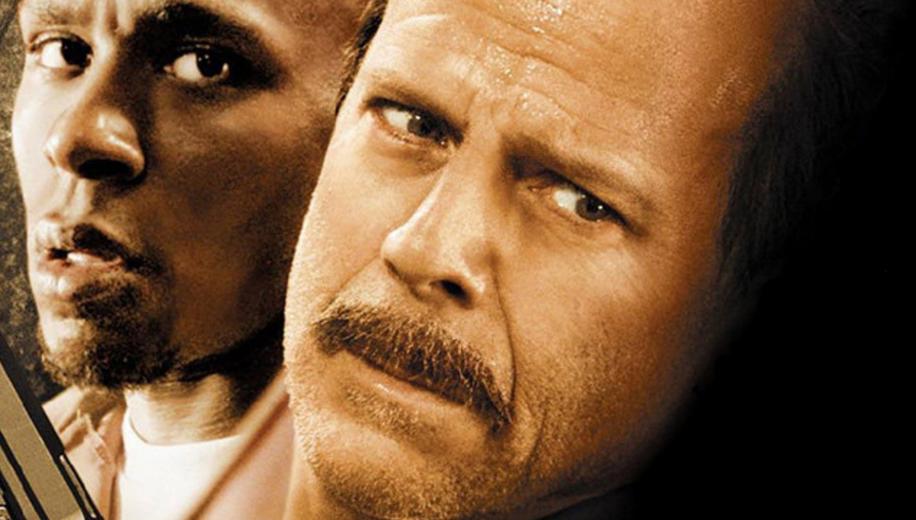 16 Blocks is showcased with an anamorphic 2.40:1 image that is robust, steady and quite clearly adheres to the gritty 70's visual aesthetic that Donner wanted to achieve. Whilst there is nothing inherently wrong with the picture, there isn't anything too spectacular to sing about, either. The transfer seems a little too soft around the edges for my liking, with objects in the background losing a bit of distinction and a degree of murk floating about within the darker elements of the image. Mind you, I don't doubt that a lot of this is may actually be intentional. Contrast levels cope well with the shadowy interiors and the brighter street scenes, with the rooftop shootout about the only time we get to see some sunshine.

Colours are deliberately muted and toned down. The dazzle of life on the bustling streets is overcast in favour of a more realistic snapshot of a few early morning hours. Detail can be rich and varied - from the accoutrements of the squalor-riddled apartments our heroes find themselves in, to the gleaming chrome on the bus as it bashes its way through the streets, and from the faces and clothing of the many bystanders to the items on the drug store shelves - but, unsurprisingly, it is with the close-ups of the stars where the disc really shines. Old Brucie's aged visage may not look entirely convincing once the bullets have begun to fly, but you can still see every crack, crag and wrinkle on his face and furrowed brow as clearly and deeply as a First World War trench. His bloodshot eyes and pallid, sweaty skin have an authentically sick-looking sheen and every strand of wayward grey on his balding pate is clearly picked out, too.

Overall, this is a decent transfer, but certainly not the sharpest image around.

The DD 5.1 mix on this standard DVD can be very engrossing at times. The bustle of busy New York streets is very well reproduced with innumerable voices, car horns, tyre screeches and hubbub swirling all around the set-up. Indeed, the soundtrack is at its most convincing when immersed in the crowds. Dialogue is muttered and downplayed for a lot of the time, purposely conveying the hushed urgency of Jack and Eddie's plight, yet it is always clear and well-rendered without any transfer defects. The action is very pleasing though, with the plentiful gunfire and shattering glass blasting across the room with smart steerage and realism. The solid whupp! of 9mm rounds pinging past your ear is a bombastic joy. However, I do have a slight problem with the impact of the bus as it smashes through other vehicles and obstructions - it just seems to lack that meaty wallop of a nice, deep bass crunch, which is a little surprising given the sterling results the track achieves elsewhere. Somehow the big heavy stuff just lacks the necessary depth and aggression that I would have expected from a fresh release.

Klaus Badelt's score comes over quite well, with lots of electro-throbbings simmering away around the soundscape, and the more conventional orchestral moments offering a reasonably nice sweep too. Overall, the track does a good job of placing you in the thick of New York, even if the bass seems to lack the necessary oomph when it comes to the vehicular action.

We get the much-touted Shocking Alternate Ending which, with a brief introduction from Richard Donner and Richard Wenk, runs for about six and a half minutes. Basically it depicts the kind of ending we really expected all along, picking up from the final moments of Jack and Frank's confrontation in the car park beneath the Law Courts and seeing us through to the film's climax. Is it better? Well, it all depends on the individual viewer. Personally, I think it smacks of the 70's style that Donner was aping all along and, as such, is probably the more logical way to go. But, I have to say that I actually prefer the one in the theatrical cut. Sure, it's sugar-coated and a tad schmaltzy ... but I like that once in a while.

You can also watch the entire film with this alternate ending branched-in, if you so desire.

Then, besides the Theatrical Trailer, we get quite a generous helping of Deleted Scenes, roughly twenty minutes' worth. These don't really add much, and suffer from playing in one continuous go, with Donner's and Wenk's largely superfluous commentary running over them.

A low-key thriller that works better as a character study, 16 Blocks still hits the adrenaline button on a couple of occasions. Willis, as ever, delivers a fine performance - a little reined-in and caricatured at times, but still engaging and able to bring emotion and pathos to a role that could so easily have been a total cliché. Mos Def wins you over as well, and David Morse makes for a convincingly troubled villain. Richard Donner, though, appears to be slumming it with a film and a story that he would've tackled better had he done it instead of Lethal Weapon 3 - the point at which, regardless of what the poster proclaimed, the magic had most definitely left the series.

AV-wise, 16 Blocks isn't the most polished of releases either, perhaps reflecting the film's B-list status, and the extras are considerably sub-par. Still, it is an entertaining enough diversion, even if it does just travel down a very well-worn path.