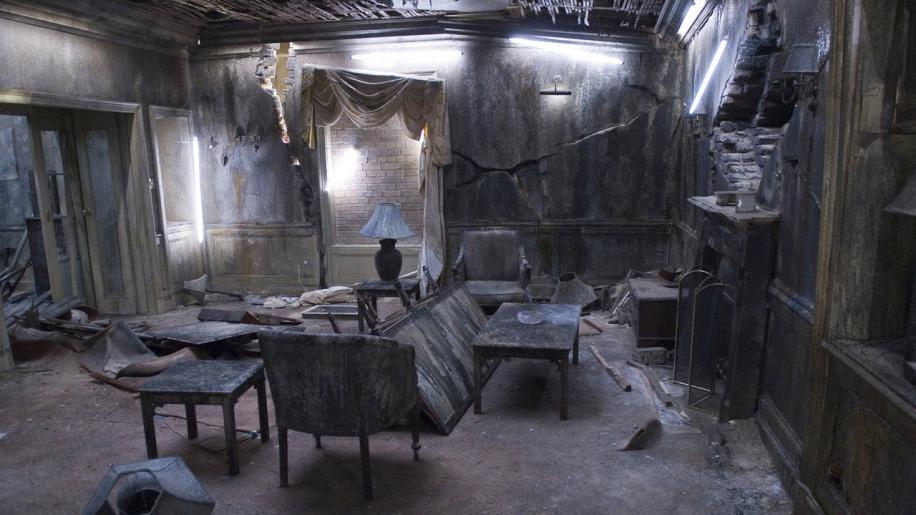 When you're in the hospitality trade, service matters...or so they say. It's a pretty straightforward formula for hoteliers to follow to help keep on top their trade. Customers appreciate the comfort, the luxury along with all the pampering attention to detail that such service and such environments bring. Of course the real world isn't always as simple as that and for any business to prosper, a little bit of publicity never goes amiss. Whether it's good or bad, doesn't matter either way: all publicity is good publicity. When you include haunted sightings, ghosts, spooky events and things that generally go bump in the night as part of that marketing formula, it unsurprisingly raises the interest and inquisitiveness of prospective guests.

Michael Enslin (John Cusack) is a writer of supernatural phenomena, in particular haunt guidebooks, whose career generally appears to be washed up and on pretty low ebb. He now spends most of his time schmoozling about researching hotels, motels and holiday inns for bizarre and supernatural sightings. I guess it pays the rent and somebody's got to do it. Enslin is an apathetic character, well seasoned and certainly tired of his day job. This is in the main due to the continually fruitless campaign of him trying to find something worthwhile to write about. Cusack plays Enslins' character sympathetically and rather convincingly in many respects.

The story starts when he is sent a lead by way of a postcard to Room 1408 Dolphin Hotel New York....simply stating don't go there. Now for those of you who are numerically minded you will quickly fathom out that 1408 as a sum equals 13. Enslin's numerical dexterity latches onto this and the interest in visiting this place leads him to decide to go investigate what it's all about. It's one lead of the many that he receives but nevertheless he feels compelled to make a visit.

A bit of research on the Dolphin Hotel and its infamous Room 1408 reveals a history of rather misfortunate happenings including mysterious deaths, a string of suicides and a host of undesirable outcomes on its inhabitants. It's a woeful catalogue of disastrous events for all those who have rented Room 1408. Enslin is obviously not deterred by all of this and with a tally of some 56 deaths reported in that room across the many years, the possibility of coincidence wears rather thin with him. Off to New York he goes.

Enslin arrives at the Dolphin Hotel and tries to check into Room 1408. He gets all the unusual cursory glances from the hotel staff and he's directed towards the manager Gerald Olin (Samuel L Jackson). Enslin eventually gets his way and his insistence to stay in that room leaves Olin very little choice but to let him do so if he so wishes. The starkness of Samuel Jackson and the almost cocky approach of Cusack is a great contrast of styles. It works well and the interaction between the two at work in this scene at this point is fascinating.

Samuel L Jackson, with his straight back no nonsense style and terse delivery of lines has won him many, many fans of which I am one. However, I must say that he plays only a bit part in this film and frankly there is nothing weighty about his performance on offer as a result. In some ways he does manage to conjure a convincingly weird character out of Olin but it's nothing that adds much or any substantial mystery to the film. Simply put there's all too little of him on offer in this film.

At this point in the film I must admit I also felt that there was never going to be anything substantial or worthy of note left in store for the viewer. The story had been pretty much outlined at this point. It's Stephen King all over again, this time with a shorter and more honed version of The Shining. Although King has to be admired for the sheer volume of work that he has churned out over the years, he has also to be forgiven if he ventures back over already once covered ground. After all one man can only have so much imagination. So, the direction of 1408 was clear at this point and all that remained was purely left to the execution of matters involved. Now I must also say that this is where great credit goes to Cusacks' performance along with Mikael Håfström's direction. The combination of these two enabled this movie to be a slight cut above anything within the genre when mere mediocrity was beckoning.


Room 1408 itself was a pretty non-descript hotel room. Much like any other hotel room, a bed, a bathroom, a wardrobe, sparsely littered with furniture and a few decorative paintings. In actual fact everything about it was so disappointingly very, very ordinary indeed. Even the view out of the window was quite unspectacular. Nothing about it suggested any of the sinister goings on that had prevailed or indeed that were about to happen. What? This was it? The infamous Room 1408? No wonder Enslin felt underwhelmed by it all.

Well it doesn't take long after checking in that the spookiness began to reveal itself. Mysterious chocolate mints appearing onto the pillows, the re-folded toilet roll, the radio alarm clock suddenly switching on with a 60 minute sleep timer, the radio playing The Carpenters “We've only just begun” over and over again. Oh by the way before I forget, I must say at this stage that Olin had already warned Enslin that he thought he would only last an hour in the room. One hour? It's not much of a challenge and you can see why Enslin felt quite incredulous about the whole thing.

Now the spiral of weird happenings begins to unfold slowly and gradually. The series of events adds much tension due to the style of build up. Håfström's direction successfully builds the suspense and horror in both quite a claustrophobic and dramatic form. At first it's a few very subtle events, which can be forgiven for possibly being pranks by hotel staff or merely coincidental happenings but the whole thing continues to build. Each event becomes more and more sinister until eventually little doubt remains. This is one evil room and on the skull factor it rates as a 10. Every attempt Enslin makes to escape from the room you willingly hope that he somehow manages to get away but all the roads all lead him back to the room. You soon realise he is never going to get away. The evil that the room induces within its inhabitants leads them to eventually self-destruct in a deranged sense of delusion.

The story also alludes to Enslins character and his torment from within of having lost his young daughter to cancer. Many a parent find this sort of thing understandably irreconcilable and Enslins was no different. The evil of the room was torturous and relentlessly exploited all aspects of mental weakness in every manner of its inhabitant. In all though I felt that this area of the plot overly muddied the storyline somewhat and added unnecessary confusion to the movie.


Also having only a single room to play with and a singular location was and is a very limiting factor indeed. The horror that was built up had to maintain a psychological terror about it all. I think this is where Hafstrom succeeds for the most part. Of course there is also plenty of special effects used later on into the film. Though, as the story moves along the room's evil was never entirely reliant upon the physical side of things. In actual fact what emanated from the room for me was always a far more psychological evil.

For the most part the special effects are used to good affect. Paintings that come to life, strange hallucinogenic characters, weird images and the changing landscape within the room all keep you on your toes and entertained. There's nothing here to make you jump as such but it's frightening enough in its own way. However I must say I felt quite disappointed towards the latter part of the film.

The other disappointing thing about this film was the ending. Or should I say endings? This version is a Directors cut and comes equipped with three endings in all and I have to say none of them was satisfactory. Whilst some endings in films such as these can be quirky in order to leave you hanging on, I think that here in 1408 the ending was simply trying to be cleverer than what the film deserved. There are a number of false endings in the last 15 minutes and it all becomes rather tedious. It would have been far better to get to a succinct ending. I would imagine there will be those who love this movie right through to the end and there will be others that will certainly switch it off at the 2/3rds mark. Pity therefore, that the last 15 minutes were lacking any goal orientated direction as in many ways the film had actually held it's own up until then.

1408 is not a horror movie per se but it is an intriguingly frightening one that does go someway in making you feel unsettled and disturbed. The movie primarily revolves around a singular hotel room, which in itself is quite a limiting factor. Mikael Håfström successfully builds an unusual sense of eeriness about the whole thing and keeps the level of interest high for at least 2/3rds of the movie. Cusacks performance is eminently capable and he really does gel with the character as well as the psychological problems that he is facing. As I say much credit to Cusack, he performed the role quite naturally and this was one of his better performances. I would guess he would gain much kudos from his performance. In the end it's a Stephen King short story turned into a movie. You will draw parallels and it's not the most “Shining” example of his work. There is only so much a writer can conjure up with his imagination over a lifetime of work and there is only so much a director can work with from that.