Benghazi, by way of Bayhem. 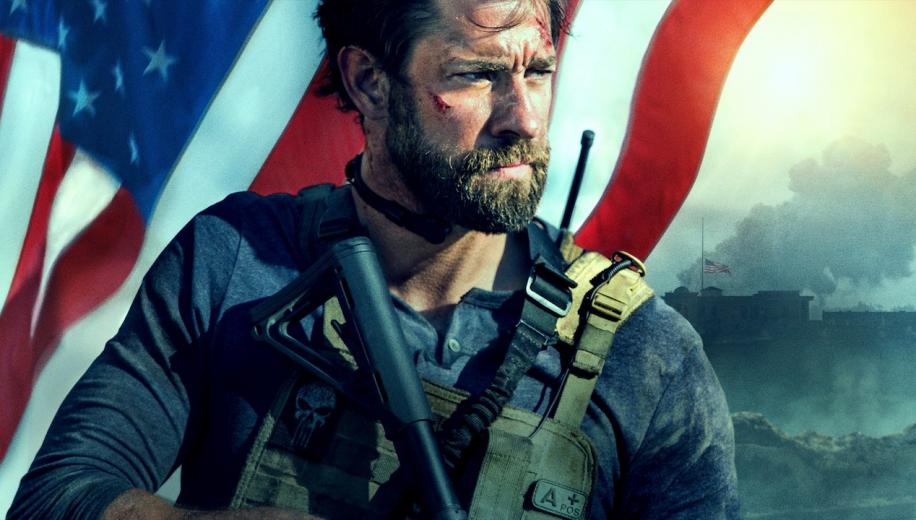 Indeed, Benghazi is strong work from a filmmaker who has been anything but over the last decade of Transformers tedium. Although this loose retelling of the controversial true tale of a half a dozen souls trying to survive attacks from seemingly endless Libyan rebels with no backup or assistance is arguably too politically infused for Bay’s particular skillset, it's also the best work he's done in years. Unlike directors Peter Berg (Lone Survivor) or Ridley Scott (Black Hawk Down), Bay is a little more clumsy when it comes to important things like casting and characterisation, probably wondering why he couldn’t have put a teenage supermodel in this warzone, and thus finds it hard work fleshing out the background lives of these heroic soldiers without resorting to cloying cliché. He gets there eventually however.

And thankfully, whilst perhaps not as star-driven as some of Bay's most entertaining works (The Rock, Bad Boys), the then-upcoming cast have more than enough going for them to muscle through the Bayhem, with John Krasinski (A Quiet Place) and the ever-underrated James Badge Dale (Iron Man 3) making for a strong pair of friends caught up in an impossible situation. Max Martini lends further military authenticity, thanks to four seasons on the excellent David Mamet TV show The Unit, and the increasingly popular Pablo Schreiber (Den of Thieves to Skyscraper to being cast as The Master Chief in Halo) does well as the character who largely says what everybody else is thinking.


A surprisingly strong and veritably competent military survival thriller, falling short of Black Hawk Down but comparing more favourably to Berg's The Kingdom and Lone Survivor

The actors gel together to make for a good unit, only occasionally overshadowed by Bay’s desire to blow people up in increasingly violent ways and, to give the director credit, this is the most restrained that he has been in over a decade. The benefit to that is that there is more time to enjoy his consummate skill at framing action, without it becoming over the top, with several striking shots lapping up the acres of action and showcasing an impressive eye for military chaos that more than compares to his peers.

13 Hours also manages to balance a marginally jingoistic portrayal of its military contractors with a respect for them which eschews the now-cliched stigma they are usually afforded in movies, and though it never quite pulls the trigger on the Obama and Clinton administrations, instead largely sweeping any overtly condemning political conclusions to one side, that perhaps leaves the focus with what is already a compelling series of events following the wake of Gaddafi’s death as the state falls to rebels and, ultimately, ISIS.

A surprisingly strong and veritably competent military survival thriller, falling short of the sub-genre defining Black Hawk Down, but comparing more favourably to Berg's The Kingdom and Lone Survivor, as an Alamo-style military actioner about a group of heroic soldiers taking a last stand against a huge opposing force, it's a pretty damn good watch.

13 Hours: The Secret Soldiers of Benghazi comes to UK Ultra HD Blu-ray courtesy of Paramount, marrying up to their likely identical US release from just last month, and utterly stunning in spite of being ostensibly just an upscale; an increasingly irrelevant label given some of the recent examples we've seen that defined any supposed technical limitations afforded by '2K only' Digital Intermediates.


Whatever else Bay's films may or may not be, they look and sound tremendous

Rather unsurprisingly, 13 Hours: The Secret Soldiers of Benghazi is pure demo 4K territory. Whatever else Bay's films may or may not be, they look and sound tremendous, and this is certainly no exception, enjoying resounding clarity and razor-sharp focus; promoting superior detailing on sweaty, stressed military visages, weaponry and battle-damaged urban environments. Bay loves his focus on cascading empty shells and busy exploding setpieces, and it's just perfect eye candy for 4K enjoyment.

Of course, the other thing Bay loves is running hot, with his high contrast palette giving the HDR, WCG and Dolby Vision a serious workout, bringing fiery gunshot and explosive visuals to eye-searing light here; it's a very hot environment, and the colours are gorgeously rendered; blue skies, tanned skin, fiery gunfights and plenty of boom boom, all backed up by impeccable blacks. It's demo excellence, and just shy of perfect.

The aural accompaniment comes in the form of high definition 3D immersive audio of the Dolby Atmos variety, which is also perfectly suited to this kind of Bayhem, giving your sound system a serious workout once things get lively.


Dolby Atmos is perfectly suited to this kind of Bayhem, giving your sound system a serious workout once things get lively

Dialogue remains firmly prioritised across the frontal array, given keen dissemination and coming across clearly and coherently whether in tense opening conflicts, during backroom banter, or in the heart of a gunfight. The score is suitably enthusiastic, and perhaps not as emotive as the best, but certainly a driving force, underpinning the feature, but it's the effects which really define the track, affording some degree of object-based separation which sends shells tearing through your living room, and carries some heavyweight booming underfoot courtesy of the active LFE involvement. Once the siege begins, all bets are off. This is easy demo material and certainly edges up to reference perfection.

Nothing on the 4K disc, but the accompanying Blu-ray includes the same Featurette-based extras as on the previous release

As an Alamo-style military actioner about a group of heroic soldiers taking a last stand against a huge opposing force, it's a pretty damn good watch

Making for a solid, if lesser, companion-piece to the recent Black Hawk Down 4K release, Michael Bay's best film in the last decade, the mouthful that is 13 Hours: The Secret Soldiers of Benghazi, gets an excellent 4K package, with superb video and reference audio, as well as all of the extras from before.