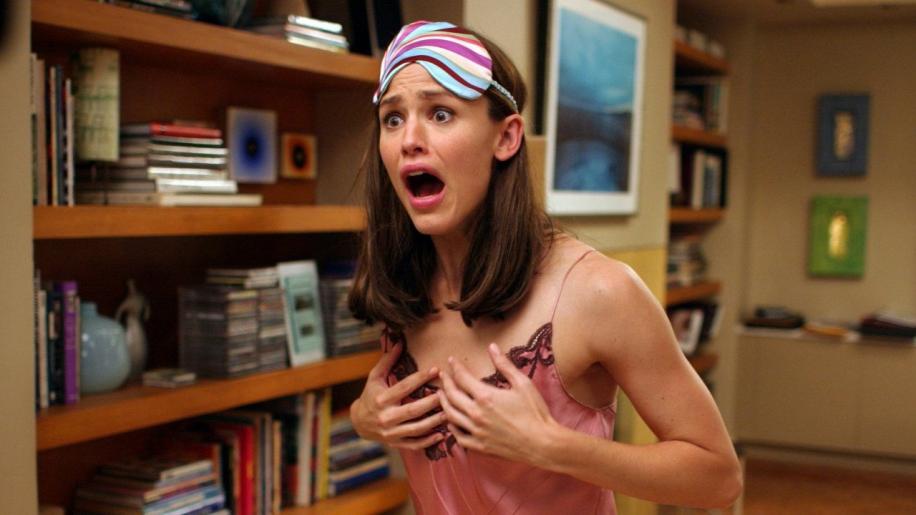 To change ones image is fraught with danger, especially when one is in the public eye, a cinematic star with a perceived image, an image that the cinema going public is happy and satisfied to accept. Many have tried very few have succeeded. Witness Schwarzenegger's play against type in the disastrous Junior, or Stallone's radical departure to acting in the excellent Cop Land, a film he's yet to recover from. So when I see Jennifer Garner, the hard hitting C.I.A. agent from Alias or the no nonsense assassin Electra from Dare Devil, in a teen comedy alarm bells immediately start ringing. Thankfully my fears were quickly dispelled as Garner's winning charm far out ways any stereotyping as she carries this girly remake of Tom Hanks' Big (1988) firmly on her shoulders. Actually that's not quite fair, 13 Going On 30 is not a remake, even though it does have the same central premise, inviting the inevitable comparisons.

This part of the review contains strong spoilers. Jenna Rink is a thirteen year old high school student complete with braces, low self esteem and a fierce desire to fit with the 'in' crowd, the six chicks. Her only real friend is Matt, her next door neighbour, who constantly tells her to be herself not follow the crowd, he also has a strong crush on her, but Jenna fails to notice him with her desire to be older and independent. During a fateful birthday party Jenna's guests (that only turned up because Jenna agreed to complete some homework for them) place her in a closet on the pretence of a 'kissing' game when in actuality they are leaving. After the realisation of this something magical happens Jenna awakes as a grown thirty year old woman (Jennifer Garner) with everything her thirteen year old mind had considered essential; independence, journalistic job for a fashion magazine and drive. However, unlike Big which saw Hanks miraculously 'big', Jenna just skips seventeen years of her life, it is now contemporary times and the world, including her friends and family, has changed, though Jenna remains age thirteen in her new thirty year old body.

After initial the initial shock and floundering Jenna seeks out her childhood friend Matt (Mark Ruffalo) only to find out that the two are no longer friends and have in fact not seen each other since high school. Unperturbed Jenna goes about her new daily routine, spending, enjoying work and partying. Unfortunately it soon dawns on her that she does not like the thirty year old Jenna, or rather the route and person the thirty year old Jenna took and became. It transpires that during the 'missing years' Jenna cut all ties with her old life, including her parents, to become the ruthless self sufficient and successful business woman in front of the mirror, but the cost has left her shallow and empty without friends or family. When Poise, the magazine Jenna works for, is being out sold by its rival Sparkle, she rediscovers her passion and single handily revitalises the rag; in the process reforming her close friendship with Matt. Or rather, she would if her 'friend' had not stolen the ideas and sold them to Sparkle for the price of a promotion. With all looking bleak, her job destroyed, and Matt getting married, Jenna despairs, just as she did at thirteen, luckily there is still just enough wishing dust to sort things out.

Winick directs an odd little piece here, on the one hand we have simple grass is greener scenario, but on the other a complicated study of choice and consequence. He tries to juggle these two elements all the while keeping a light hearted comedic vein running throughout and to be honest the film does struggle, a bit. The main focus is of course young Jenna, we see life through her eyes. The wide world of 2004 is at first full of wonder and excitement and Garner portrays this perfectly. (Her work mates on Alias always consider her a thirteen year old girl when the cameras stop rolling). Without such a strong performance the film could so easily have fallen at the first hurdle. But it is her journey of discovery that we eventually empathise with. Those of an age know how hard some work places can be, the dog eat dog world can be crushing. As Jenna starts to realise this, some of the girlish charm starts to be replaced by resolve only to be quashed in defeat. Garner pulls out all the stops to make us feel for the character. She has a match with Ruffalo though, he can certainly hold his own, witness their tearful realisation that their friendship has reached its conclusion, not the sort of stuff comedies are made of.

With all this emotion going on Winick still manages to cram in some fairly decent comedy, this is principally 'fish out of water' stuff but is conducted with real wit, Garner proving she also has some nifty comic timing. Andy Serkis is just magnificent as the magazine editor, often used as the comic relief he just exudes character and is the perfect match for the part. Unfortunately with so much happening the film does tend to drag a little, especially in the third quarter where Jenna is at her lowest ebb. Fortunate though that this is where Garner puts in some stunning performances. This is probably the films biggest problem, as a fun and fluffy film there is just a little too much characterisation, we really get to feel for the characters and their plight, but at the expense of the fun. That and we already know that everything is going to turn out alright in the end. So 13 Going On 30 is so much more than a girlie Big, making it an interesting if not entirely satisfying watch. Having said that the film does mature with watching, there is intricate plotting of the story and the more one watched the more one sees, I have no doubt the film will find a good home in the DVD market.