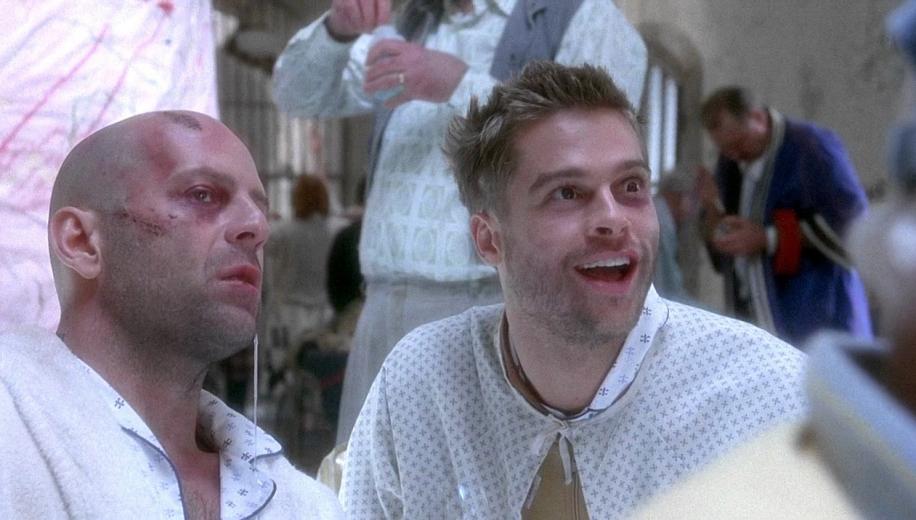 Disappointing is the first word that springs to mind where this 1.85:1 anamorphic print is concerned. The image appears washed out with the colour palette suffering from over bright whites and compression problems, which leave blacks looking grey and skin tones look pale. There seems to be a real inconsistency with the master print and encoding to disc, some areas look highly detailed and with vivid colours, yet for the most part the image is soft and flat. Comparing this transfer against the R1 disc from a few years ago reveals that both are identical; there has been no attempt to re-master the image. Lets just hope the much talked about re-release on R1 DVD does better then this. Presented in DTS and Dolby Digital the soundtrack is a master class in the art of atmosphere. All five speakers (and the subwoofer for that matter) are used to create two realistic worlds for Cole to inhabit, the bustling streets of '96 Philly and the future world of underground claustrophobic living. The surrounds are used to generate spot effects and background noise which envelops the listening position to great effect. Dialogue is rich and intelligible throughout and the haunting score is used to brilliant effect. I remember seeing this movie in the cinema on its release in DTS and was amazed at the time with the effectiveness and loudness of the sound mix; this is thankfully captured on this disc in all its glory. The DTS track really stands out against the Dolby version, Effects are easier to place and the bottom end is tighter and better controlled. The DTS mix here does the same job as the Jurassic park disc, it immerses you in the action sounding clear, crisp and loud when required, brilliant stuff indeed. The majority of the menus are thankfully in English text. First up is a short behind the scenes documentary with interviews with the cast and crew including director Terry Gilliam. There are two Japanese trailers as well as an English trailer for the movie, a Japanese text cast and crew feature and a strange feature which lets you go back and forwards on the timeline of the film. Not a lot here to be honest and most seem to have been tagged on for the sake of having some extras. The film is stunning, the picture quality and extras are disappointing but the DTS track is excellent, the choice as they say is yours.