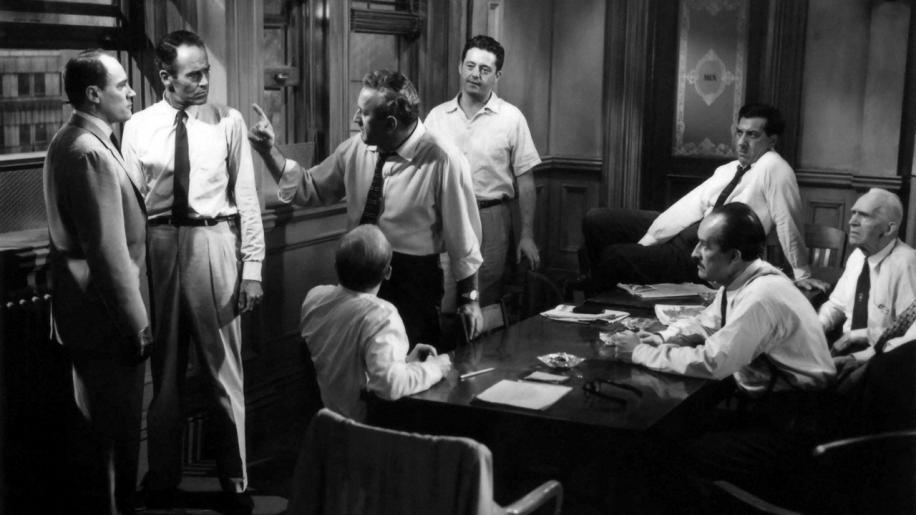 Originally conceived as a single 60 minute episode in an anthology TV series, and broadcast live back in 1954, writer Reginald Rose’s Twelve Angry Men teleplay soon gained substantial interest. Its success prompted the Studios to consider a film adaptation (indeed the ’50s saw more and more film Studios looking to TV productions which could be made into feature films), and, with writer Rose on board, they looked towards casting the lead role of the dissenting juror; choosing Henry Fonda – at the time, the everyman-hero equivalent of Harrison Ford – before selecting TV director Sidney Lumet to make it his first theatrical directorial feature.

Now renamed the numerical 12 Angry Men, the drama focussed on a jury in a murder trial; we encounter them after the evidence has been adduced, the witnesses examined and cross-examined – just receiving their directions from the Judge, after which they are locked in a room to come to a (hopefully) unanimous decision on the case. It seems like an easy case at first – everybody appears to have already made up their minds, and most of them are just itching to finish their jury duty and go back to their lives – but when they take a preliminary vote and find that there is one dissenting juror, the group are compelled to re-examine all of their assumptions, rationalisations and personal prejudices. The one outstanding juror does not necessarily believe that the man is not guilty – he just has his doubts and wants to determine whether or not they are reasonable ones.

This fairly straightforward story is remarkably well-executed, all taking place in just one room, with these 12 players basically talking – or arguing – for the entire duration (indeed it would rather expectedly effortlessly make the transition to stage play soon afterwards). Yet it is a testament to the strength of both the script and its excellent characterisations – of the superb direction and the powerful performances – that the film remains an outright classic, enduring over the years, and remaining just as prescient and revealing more than half a Century after its inception.

In the US it is believed that jury trials are the fairest method of delivering justice: having the fate of the accused decided by a jury (purportedly) of their peers, rather than merely by members employed by the State (Judges). In many other countries, however, the innate prejudices of ‘laypeople’ – religious, cultural, political, racial etc. – have resulted in the eradication of such trials. For example, in India and Pakistan, after independence, jury trials were abolished because it was believed that the inherent ethnic tensions would lead to juries being biased; compare this with events in the US, where an all-white jury (in)famously acquitted a group of all-white police officers on charges of excessive force, despite having seen video evidence in support of the crimes (the 1992 Rodney King trial which led to the subsequent LA riots).

It certainly feels like jury trials offer a better chance to a criminal to still be acquitted – normally all they need is one dissenting juror to sway things – but this actually supports the principle upon which most US and UK law is founded, namely, innocent until proven being; the theory being: the harder it is to convict an actual criminal, the harder it would be to send an innocent man to prison. But ‘hard’ does not necessarily mean ‘impossible’.

So in 12 Angry Men, we got to explore the flipside of the notion of a ‘fair trial’, with a jury of biased, prejudiced, ignorant, and stubborn individuals who have already made up their minds pretty-much from the outset. And though even the names of each of the individual jurors were largely omitted, each and every one of them was given a distinct personality, and a specific role to play in this drama. There’s the jury foreman, a fair man, but preoccupied with his role (Cape Fear’s Martin Balsam); the meek bank clerk who just ‘feels’ that the accused is guilty (The Odd Couple’s John Fielder); the man with a similar violent background to that of the accused (Quincy himself, Jack Klugman); the indifferent sports fan who just wants to get to the game (All the President’s Men’s Jack Warden); the outspoken, loudmouth outright racist (Dr. Strangelove’s Ed Begley); the indecisive ad executive (Bring me the Head of Alfredo Garcia’s Robert Webber); and the tough but respectful, old-school labourer (Patton’s Edward Binns).

Although Henry Fonda’s dissenting reasonable man would find early support from a wise elderly juror and also from a naturalised citizen (played respectively by Joseph Sweeney and George Voskovec, the only two actors who stayed in their roles following the transition from TV episode to feature movie), he would find his greatest opposition coming from two disparate individuals: a highly analytical stockbroker who offers up genuine, logical arguments in favour of the accused’s guilt (Superman II’s president, E.G. Marshall), and a stubborn father who hasn’t seen his own wayward son in years (On the Waterfront’s Lee J. Cobb) and simply refuses to see reason.

Fonda is, of course, the backbone of the production. These were his golden years, after he had established himself as one of the go-to actors for heroic everyman roles in the same vein as James Stewart, Gregory Peck and Gary Cooper, but before he started taking darker roles in films like Once Upon a Time in the West and There was a Crooked Man, and the somewhat peaceful, passive stance he takes against his more volatile, aggressively argumentative opponents is a textbook example of calm under fire, diplomacy and determination. As the votes slowly start to change in his favour, strengthening his resolve, his arguments put forward become less defensive – less passive – and he more actively provokes his opponents into fully understanding the concept of reasonable doubt.

Of course that’s what the whole film is about – what is reasonable doubt? – and it’s amazing how many people I know who have actually sat on jury trials and remained blissfully unaware of what the concept actually means. In a trial, after the arguments and evidence has been put forward, it’s up to the jurors to determine if any doubts have come to light, either by inference of the evidence, or by direct relation from the advocates in the trial. It must then be determined whether or not these doubts are reasonable ones. For example, in a trial where there are co-defendants both accused of the same murder, and where the prosecution has failed to establish which one of them actually committed the crime, the respective defence advocates often go for a ‘blame each other’ defence which has the knock-on effect of giving a jury a reasonable doubt for both defendants: the jury cannot be sure which one of the two committed the crime, and therefore have to acquit both. Compare this with a seemingly simple murder case, where all the evidence, motive, and lack of alibi has been presented – and where an eye-witness has identified the accused; if the Defendant now states that it wasn’t him – it was someone who looks like him – then the jury would likely regard this as not having established reasonable doubt. On the evidence provided, it is unreasonable to doubt his guilt based on the mere supposition that there could have been ‘someone who looked like him’ who actually committed the crime. Although difficult to elucidate in such short examples, I suspect you get my point. Well, 12 Angry Men was all about reasonable doubt, and Henry Fonda’s character essentially spends the duration attempting to show his fellow jurors that there are doubts in this trial, and that they are reasonable ones.

Somewhat ironically, the story to 12 Angry Men has often been cited – by Judges no less – as being a prime examples of precisely what juries should not do when deliberating their verdict. Many of the arguments put forward in this dramatisation are generally regarded as wholly out of the realm of what the jury can and can’t decide upon: they are speculations coming from the jurors themselves, rather than facts that have been determined within the case. The research into a similar knife and the assumptions as to the eyesight of the eyewitness are, in particular, examples of a line of thinking that, if revealed to a presiding Judge, would likely result in a mistrial being declared. Of course, notwithstanding the dramatic licence that is taken with the script, the thought processes of the jurors actually result in a much fairer trial, and the likelihood that justice has been served, even if the law is still not technically upheld, which is, in itself, a poignant commentary on law vs. justice.

At the end of the day, 12 Angry Men remains an excellent study of minimalistic plotting, excellent character development and superior strength of script – the entire movie reliant on writer Reginald Rose’s words; on the thankfully resoundingly excellent performances of the well-chosen, often soon-to-be-famous cast; and on the expert direction of Sidney Lumet (who would go on to give us Serpico, Network and Dog Day Afternoon), who brought all of the close-confines tricks that he learned in his TV work to bear here – shooting from every possible angle, including even from inside the wardrobe, and using close-up shots to amazing effect when trying to heighten the tension. Latter, more complex courtroom dramas may have followed suit, but few have even come close to the sheer perfection of 12 Angry Men.