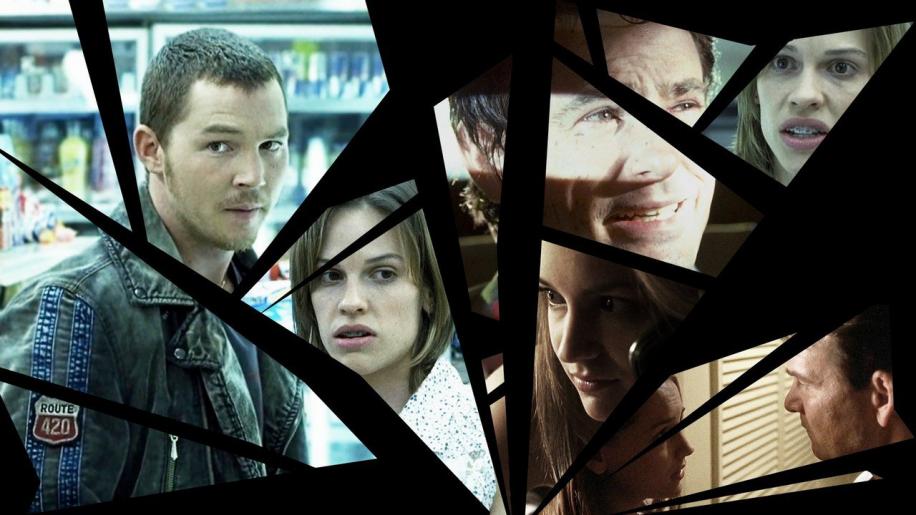 Independent film makers; the last haven for originality within an increasingly corporate industry. At a time when money men rule the world, the skilful artist is an ever endangered species; oh, they are still around, but becoming ever so rare. Worse still, even when an independent manages to secure his (or her) vision onto celluloid there is no guarantee that it will ever be seen theatrically, for you see, money men have the last laugh, they too control the distribution. Sad but true, and that is exactly what happened to Greg Marcks' debut feature 11:14. Completed in 2003, it was shown at various film festivals, even nominated for an award at one of them, but then left in limbo before eventually being picked up by New Line in August 2005. They gave it a theatrical release in San Francisco only, without fanfare or advertising only to then shoot it straight to DVD, which is where our story begins. Marcks, at twenty nine, joins the ranks of young talented writer directors, his feature 11:14 certainly smacks of originality upon first glance. Of course there is nothing original any more, all ideas are recycled and repackaged for a new generation. Marcks' idea is to tell a single story through the eyes of five different people with a non-linear time frame. Straight away comparisons can be drawn to Kurosawa's Rashomon, Nolan's Memento and Tarantino's Pulp Fiction. Unfortunately when citing such quality films as a direct link to the idea behind 11:14 the problem of expectation arises; in sitting with such company anything but a quality film will be deemed a failure. But whilst I think failure is too strong a word, it is not too far from the mark, because 11:14 does have some problems, and whilst I don't think its problems should have denied it a theatrical release, far worse films have been released, presumably a first time director with such a film must have had a bearing.

The title of the film refers to the time 11:14 PM, there are five separate stories meandering their way to this exact time. The five story elements are: Jack, driving into Middleton after drinking, a body hits his car and his attempts to cover it up; Three lads driving in a van around Middleton to vandalise signs; Duffy, trying to secure money for his girlfriends abortion; Frank, trying to cover for his daughter; and Cheri, Franks daughter, the cause and effect of all the previous events. These stories are linked by the common characters and events and frequently cross paths on their run up to the payoff, Marcks skilfully keeps the intertwining stories at a reasonable pace and neatly ties the beginning to the end. However, by starting the film at the end of the story, there is a distinct lack of suspense, and with all the individual elements all converge to the single point in time, there is also a lack of mystery. Taken as separate stories, each segment is a neat package, but once combined it is not too difficult to work out where the story is heading, and crucially how it is going to get there; this is the film biggest flaw. In allowing the audience to perceive the same event from different angles doesn't change the fact that the same event happened; Kurosawa took one event in Rashomon and viewed it four completely separate ways, the event was the same but the perception of it was altered, leaving the audience to make up their own minds as to what really happened. Not so here, there is no alteration of perception, no thinking, no challenge, and in showing what becomes the climax of the film half way through the run time, the events become more a 'join the dots' exercise. Add to this a cast of rather one dimensional characters, there is little to no emotional involvement with any of them, so not only do we know what is about to transpire, we don't care about it when it does.

It is a shame really because the cast is uniformly excellent in their respective roles. Special mention must go to Hilary Swank as Buzzy and Shawn Hatosy as Duffy, they really pull of the convenience store clerks trying to deal with the hand dealt to them. Barbara Hershey and Patrick Swayze are as solid as ever as the parents of Cheri, who is played by Rachael Leigh Cook. She is seductive in her small town girl with big aspirations part, and it is her story that is the backbone for all the spiralling elements that the film follows. Marcks holds the actors attention well, it is their parts that are under written, arguably it is Swank's part, Buzzy, that has the most emotion to it, there being little motivation to her actions. Marcks also hold the pace of the film too, starting slowly and racing towards the climax, taking a leaf out of Aronofsky's book with rapid editing and overlaid score. The final montage is very effective and though we already know what's gone on, it does neatly tie all the ends together, with the exception of who is ringing Cheri's phone.

The film is billed as a dark comedy with thriller overtones, but really it doesn't live up to either of those definitions. Yes there are some (very) dark comedic moments, specifically with the three lads in the car, slightly lighter moment with Frank and his dog and some of the banter between Duffy and Buzzy could be described as comedic, but there is nothing remotely thriller-ish about the film, simply due to the way the story is told. When all is and done 11:14 remains a bit of a nothing film, apart from the story telling element there is nothing original or inspiring in the film, though Marcks certainly has a talent, and as flawed as this first film is I expect we shall see fine things from him in the future. Let's hope that he can bypass or join with the money men and get his future projects in theatres, the medium for which they are made.